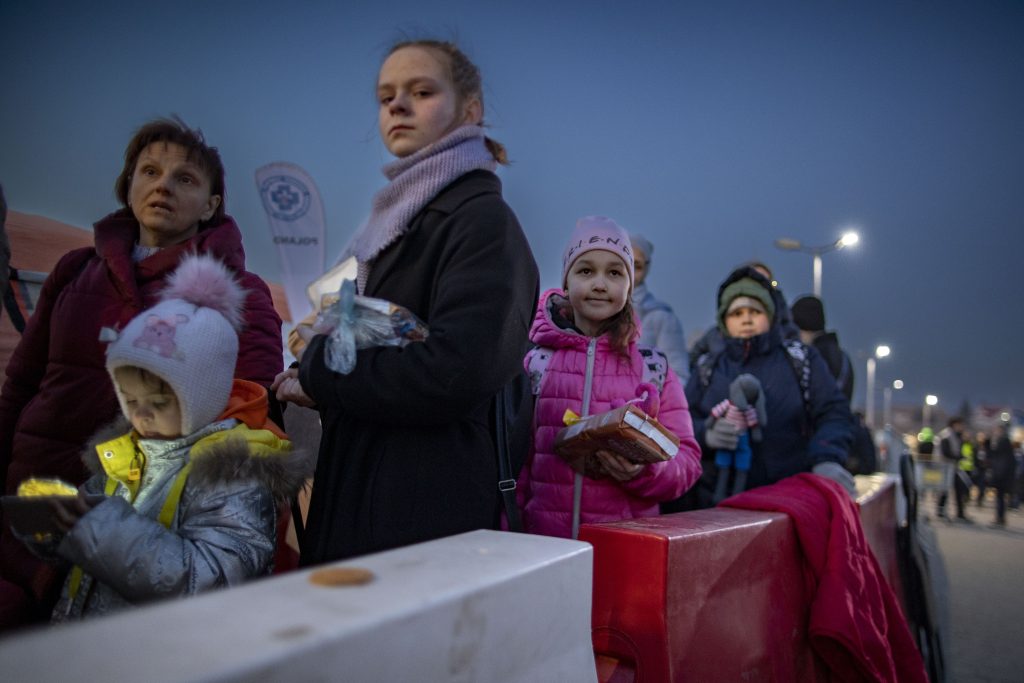 Many Ukrainians first heard the explosions of Russian missiles on the news or via online video footage. But as Putin’s war continues to escalate, the horrors of the conflict have moved closer and closer to families living in more isolated towns and villages across Ukraine.

These families are now making agonizing decisions about whether to remain together in their homes or send women and children abroad to avoid Russian atrocities against the civilian population and Moscow’s increasingly indiscriminate bombing campaign. Over three million have already fled the country. As the invasion advances, millions more are expected to seek sanctuary in the EU.

One particularly traumatic aspect of the war has been the separation of Ukrainian families as men aged 18-60 stay to fight Russian forces while women and children flee abroad or elsewhere in Ukraine. This results in heart-wrenching conversations around dinner tables and in text message groups about when to leave and where to go.

Tragically, the bombing and shelling of large cities like Kharkiv and Mariupol by Russian forces have robbed many citizens of these choices. While large numbers of Kyiv residents evacuated as quickly as they could when Russian forces first bombarded the city on February 24, those in eastern Ukraine have at times been forced to remain in place as Russian troops attack. The Russian military’s encirclement of Mariupol has left the city without food, water, electricity and heating for over a week while Moscow’s forces have relentless bombed civilian targets including the city’s maternity hospital.

The situation in small towns and cities across Ukraine is uneven, prompting millions of Ukrainians to make impossible choices. Many towns far from strategic military points have so far fared better than large cities but this may not last. Ukrainians outside of major urban centers are now being forced to wonder if fleeing their homes makes sense when the war is still some distance away.

Evacuating from a small town or village poses challenges of its own. Despite a major push by President Zelenskyy and his government to improve roads, transportation infrastructure away from major urban areas often remains poor. It is difficult enough to leave one’s home in wartime. This becomes even harder when bumpy roads and bombed out bridges slow down your journey, making you a potential target for Russian forces.

The cold logic of war also means that the Ukrainian government is more likely to allocate forces to protecting major cities and strategic military chokepoints. As heroic as the Ukrainian military has been in defending the country, scarce resources mean it cannot defend every town and village.

Family situations also weigh on Ukrainians’ evacuation calculus. Lera, a nineteen-year-old student living in Warsaw, says her family’s ties to their home in Odesa Oblast have complicated their decision to evacuate. “My parents don’t want to leave our town because my grandmothers live with them, and it will be very difficult for them to flee. My parents also don’t want to leave the house they built with their own hands and have lived in for over 20 years.”

For others, the stresses of war and the desire to keep families together prompted them to leave. After living in a makeshift bomb shelter in her apartment building basement for three days, Elena, a translation freelancer from Zhytomyr Oblast, says she decided that “my children shouldn’t have to suffer this much. I had to make the very difficult decision to move my family abroad.”

It can be difficult for individuals already living abroad to convince their family members to leave. “Russia destroyed my parents’ business. And now they are discussing whether to stay at home or flee,” says Andrii, a university student in Poland originally from Vinnytsia Oblast. “I have insisted that they flee Ukraine immediately. But I understand this is their decision. Just imagine never going back to your hometown because you don’t have a home anymore.”

Many also fear what life would look like under Russian occupation. Ukrainians who have lived near the line of contact in eastern Ukraine’s Donbas region know this all too well. “At this point, we know that the development of the region under Russian control stopped at its 2014 level. This is a fact,” says Irina, a mother who recently fled her home in Donetsk Oblast 10 kilometers from the line of contact. Russian occupation in Donbas has bred instability, violence and repression. Ukrainians are loathe to see their homes terrorized by the same forces.

Fortunately, citizens in more isolated areas of Ukraine have taken in their fellow Ukrainians hoping to escape from the senseless violence of the Russian invasion. Internally displaced people from large cities have made their way south and west and have found shelter. Newcomers help pitch in by setting up territorial defenses, preparing medical kits for soldiers, and making homemade camouflage. The war has indeed brought compassion and unity to the fore among Ukrainians, which may help explain why the country has so effectively slowed Russian advances.

Ukrainians would like to see the country’s Western partners match these qualities with increased arms supplies. Putin’s forces are increasingly turning their attention to vulnerable civilian targets including towns without sophisticated air defense systems. To guard against these terror tactics, the West should urgently provide Ukraine with greater anti-air and anti-tank capabilities.

While Western policymakers dither in calibrating military and humanitarian support, Ukrainians will continue to make difficult choices about their futures and the lives of their loved ones. It would be a relief for millions of Ukrainians if the country’s small cities and towns avoid the worst of Putin’s invasion. But the country desperately needs peace, says Lera. “We all want to lead peaceful lives without missiles flying over our heads. Doesn’t my country deserve that?”

Andrew D’Anieri is an Assistant Director at the Atlantic Council’s Eurasia Center. From 2019-2020, he served as a Peace Corps volunteer in southern Ukraine. Find him on Twitter @andrew_danieri.

Image: Women from Ukraine with their children wait shortly after the border with Ukraine, at the Medyka border crossing, to be received by helpers. Many people fleeing the war from Ukraine arrive by train here at the border in Poland, and then continue their journey by bus or otherwise. (REUTERS)