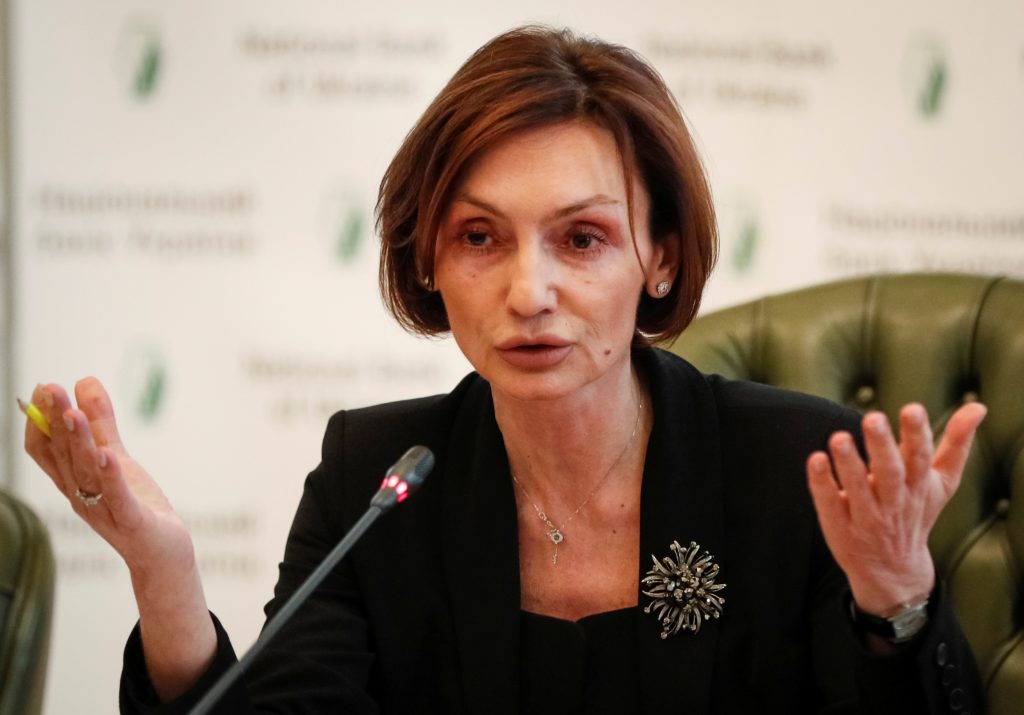 Ukrainian President Volodymyr Zelenskyy hoped to use his October 6 summit with European Union leaders in Brussels to demonstrate his continued commitment to the reform agenda underpinning Ukraine’s Euro-Atlantic integration. However, events in Kyiv on the eve of the summit will only have served to amplify concerns over the country’s direction under Zelenskyy, as was evident in an anodyne joint summit statement highlighting “the importance of accelerating and reinforcing reform efforts.”

On the day before this year’s EU-Ukraine Summit, the Council of the National Bank of Ukraine (NBU) issued a reprimand and expression of no confidence in First Deputy Governor Kateryna Rozhkova and Deputy Governor Dmytro Sologub, who happen to be the last two remaining members of the reformist NBU board established by former governor Valeria Hontareva. Officially, this reprimand was for violating ethics and internal procedures by giving a joint interview to the Kyiv Post. However, most observers believe the real reason was their continued defense of reformist NBU policies.

This move might not have any immediate consequences but reflects a changing political climate in Zelenskyy’s Ukraine that has left reformers feeling increasingly isolated. The NBU Council actually has very limited formal authority. Indeed, leading Ukrainian investment company Dragon Capital has argued that the Council is not entitled to reprimand members of the NBU Board, which holds the real power. However, new NBU Governor Kyrylo Shevchenko also voted for the reprimand.

The expression of no confidence in Rozhkova and Sologub was spearheaded by NBU board member Vitaly Shapran, who comes from Zelenskyy’s home town Krivyi Rih, and chairman Bohdan Danylyshyn, who served as Ukraine’s economy minister in PM Yulia Tymoshenko’s government from 2007 until 2010.

This was far from their first attack on the reform agenda adopted by the NBU in the years following Ukraine’s 2014 Euromaidan Revolution. Danylyshyn and Shapran have led an extensive media campaign calling for looser monetary policy, lower interest rates, higher inflation, and a lower exchange rate, which they claim will lead to higher economic growth. These policies are exactly in line with the approach advocated by Ukrainian oligarch Ihor Kolomoiskiy. Unsurprisingly, Danylyshyn was widely perceived to be Kolomoiskiy’s candidate during the selection of a new NBU governor in summer 2020.

Rozhkova and Sologub both have strong professional credentials. While Sologub is soft-spoken but firm, Rozhkova is as tough as they come. As the person most directly in charge of bank supervision at the NBU, Rozhkova is widely hated by many former bank owners because she closed down about one hundred banks during the sweeping post-2014 reform of the Ukrainian banking sector.

The most important bank targeted during these reforms was Kolomoiskiy’s Privatbank, which was nationalized in December 2016. Due to her role, Rozhkova has been subject to all kinds of harassment including protests outside her home. Meanwhile, parliament deprived the NBU board and many other state institutions of salaries for four months.

Sologub is the former chief economist of Bank Aval, Ukraine’s biggest and arguably best foreign-owned bank. He is responsible for monetary policy at the NBU. Sologub’s most striking achievement has been to win Ukraine’s long-lasting battle against high inflation. The country’s big commodity exporters, who desire a low exchange rate, oppose him.

While Rozhkova and Sologub have not yet been sacked, this recent reprimand is being interpreted as the latest step in ongoing efforts to undermine the independence of the NBU.

In July 2020, NBU Governor Yakiv Smolii resigned due to what he called “systematic political pressure.” Smolii’s resignation came immediately following a meeting with President Zelenskyy. He was replaced by Kyrylo Shevchenko, a state banker with ties to the Zelenskyy team. In the aftermath of Smolii’s departure, three of six NBU board members resigned, not least because they could not afford to stay on in their positions without pay. However, they were all regarded as less influential in shaping NBU policy than Rozhkova and Sologub.

Recent developments at the country’s national bank mirror broader trends elsewhere in the Ukrainian political arena. Since Zelenskyy dismissed a largely reformist government in March 2020, he has proceeded to systematically fire reformers from key positions throughout his administration and replace them with figures from Ukraine’s discredited political past.

The removal of a reformist prosecutor general has derailed efforts to clean up the prosecution service, while the country’s dysfunctional Constitutional Court has undermined the National Anti-Corruption Bureau (NABU), which many view as the only credible law enforcement institution in Ukraine.

This reversal of reforms could have dire consequences for Ukraine’s future cooperation with the international community.

In June 2020, Ukraine concluded a Standby Agreement with the International Monetary Fund (IMF), after having first adopted long-awaited land market reform legislation and a banking law blocking the return of nationalized banks to their former owners. In concluding this agreement, the Ukrainian government also committed itself to maintaining many of the reforms that are now being threatened or undone.

The four most important IMF priorities are the continued independence of the NBU, support for good corporate governance (including the abolition of salary caps introduced in April 2020), the defense of Ukraine’s anti-corruption agencies, and greater rule of law. At present, the government appears set to abolish salary caps for members of the management and supervisory boards of state-owned enterprises, but there is no sign of progress elsewhere towards ending the wider assault on Ukraine’s reform agenda.

As long as Ukraine’s post-2014 reforms remain under attack, there is little chance of any significant additional financial support from the IMF, the World Bank, or the European Union.

However, thanks to five preceding years of strict macroeconomic policy, Ukraine is currently in a reasonably strong economic position.

The economic impact of the coronavirus crisis has been comparatively limited in Ukraine because of an early lockdown and due to the structure of the economy. The country has also benefited from a major improvement in its terms of trade this year, thanks to low prices on imported energy and high prices on exported foods and iron ore.

Due to these favorable market conditions, Ukraine’s international currency reserves have risen to USD 29 billion, the largest since 2011. There is therefore no immediate danger of a default. However, there is equally little prospect of greater international investment or economic growth without serious reforms. At the moment, Ukraine appears to be moving in the opposite direction.

Ukrainian President Volodymyr Zelenskyy offers a positive assessment of the 2020 EU-Ukraine Summit in Brussels and calls for the creation of a step-by-step plan towards Ukraine’s future EU membership.