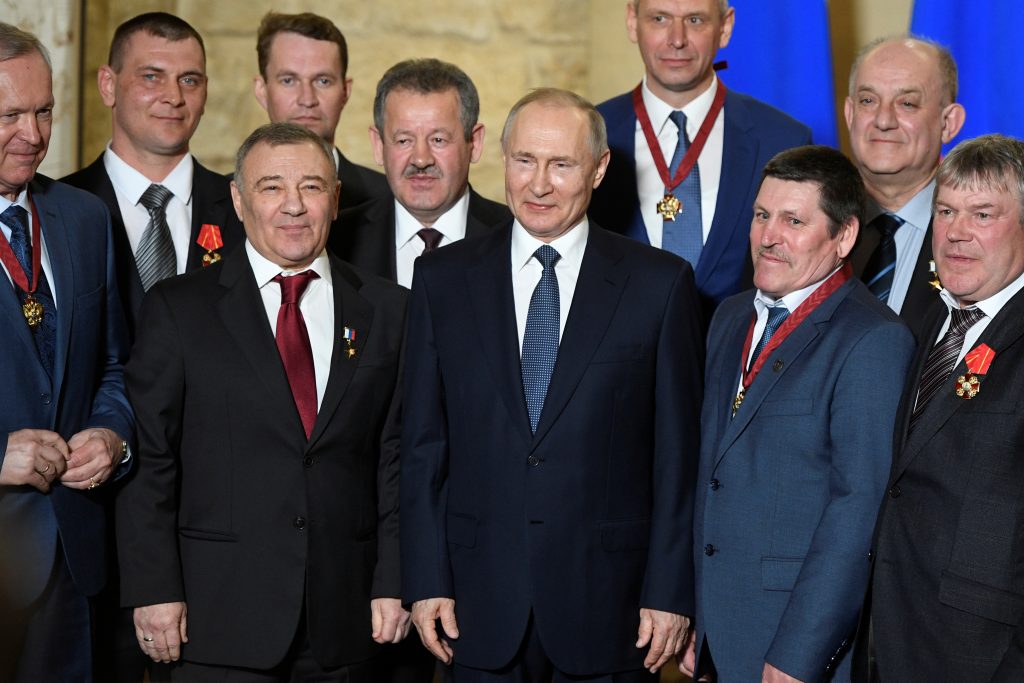 While international attention tends to focus on the anti-Russian sanctions imposed by the West, Ukraine and Russia are locked in their own cycle of increasingly harsh sanctions measures that plays an important role in the ongoing seven-year hybrid war between the two countries. Russia typically initiates these exchanges, but eventually Ukraine responds.

On June 24, Ukrainian President Volodymyr Zelenskyy signed off on expanded and extended sanctions against Russia that target 538 people and 540 entities. The same day, Zelenskyy issued another decree sanctioning 55 Russian state financial institutions. These measures are without doubt the most severe any country has imposed on Russia since the start of the current crisis in 2014.

Russia has traditionally led the way with sanctions measures in the post-Soviet world. This is only natural given the dominant regional role of the Russian economy and Moscow’s aggressive attitude towards its closest neighbors.

As a much weaker commercial partner, Ukraine tended to plead compassion rather than threatening retaliation. Whenever a thaw occurred in Russian-Ukrainian relations, some protectionist measures would be removed.

In June 2013, Russian trade policy shifted as the Kremlin grew increasingly alarmed over Ukraine’s progress towards an Association Agreement with the European Union. Until then, Moscow had treated the EU as a paper tiger while regarding its real foes as the United States and NATO. As Ukraine prepared to conclude a landmark EU agreement, everything changed.

With the scheduled signing of the EU-Ukraine Association Agreement just a few months away, Russia sanctioned Ukrainian imports from the companies of three important businessmen in Ukraine deemed to be pro-European: Viktor Pinchuk (Interpipe), Serhiy Taruta (Industrial Union of Donbas, although it was half-owned by Russia’s VEB), and Petro Poroshenko (Roshen). These summer 2013 sanctions are now widely regarded as the first public steps on the road towards the current conflict between the two countries.

Following the start of Russian military aggression against Ukraine in February 2014, much of the existing trade between the two countries swiftly ended. Ukraine primarily targeted its military-industrial exports to Russia, which accounted for one-third of the country’s total exports to Russia. By 2018, mutual sanctions had slashed bilateral trade to one-quarter of the levels in 2012.

Russia chose to go even further. On November 1, 2018, Moscow delivered its biggest trade war blow to date, imposing sweeping economic sanctions on 322 Ukrainian individuals and 68 Ukrainian companies. These were the most extensive sanctions imposed by any country in the tit-for-tat international confrontation over Ukraine.

Russia’s 2018 Ukraine sanctions focused mainly on politicians and businessmen. The list of sanctioned individuals reads like a who’s who of the Ukrainian elite. Pro-European party leaders were sanctioned as well as scores of liberal parliamentarians and ministers. Only blatantly pro-Russian politicians were left unscathed. Needless to say, the two most senior Crimean Tatar leaders, Mustafa Dzhemilev and Refat Chubarov, were also targeted.

Ukraine has now finally responded to the extensive Russian sanctions of late 2018, and has done so in emphatic style.

President Zelenskyy has become much more responsive to Russian aggression since February 2021, notably sanctioning Putin’s closest Ukrainian ally, Viktor Medvedchuk, and his three television channels. One of the key targets now appears to be another top Ukrainian businessman regarded as loyal to Putin, Dmytro Firtash.

The Ukrainian sanctions unveiled on June 24 are full-fledged blocking sanctions that include a combination of new measures and also extensions of existing sanctions. They focus on big businessmen working for the state along with Putin cronies, military officers, mercenaries, and state officials. The common denominator among all those targeted is a perceived closeness to Putin.

Ukraine’s recently updated and expanded anti-Russian sanctions are well-informed and create the impression that the Ukrainian government understands the value of targeting people close to Putin. The United States, the EU, the UK, and Canada should all now study Ukraine’s extensive sanctions in order to follow suit with similar measures.

Putin blames anyone but himself for loss of Ukraine

Russian President Vladimir Putin recently published an op-ed accusing the US of staging an anti-Russian coup in Ukraine, but in reality nobody has done more to erode Russian influence in Ukraine than Putin himself.