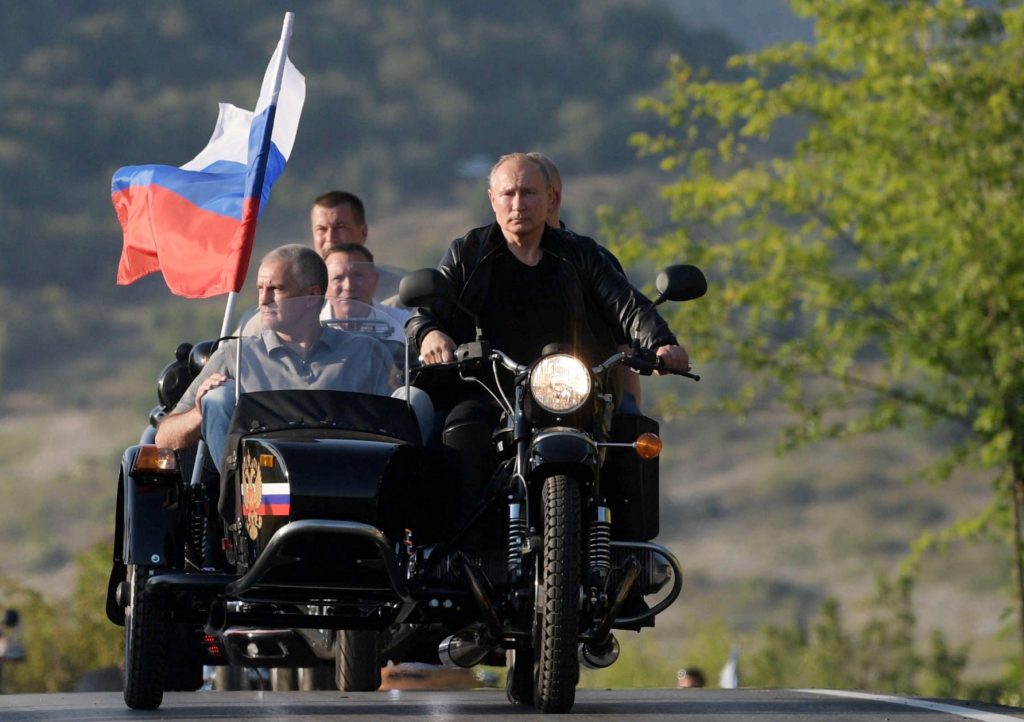 Russian President Vladimir Putin used this week’s eightieth anniversary of Nazi Germany’s WWII invasion of the Soviet Union to give his Ukraine conspiracy theories a fresh airing. In an op-ed entitled “Being Open Despite the Past” published on June 22 by German newspaper Die Zeit, Putin accused the United States of staging an armed coup in Ukraine seven years ago with the active backing of the European Union. “Why did America organize a coup, and why did the countries of Europe gutlessly support it?” he asked.

This is nothing new. Ever since millions of Ukrainians first took the streets in late 2013 to protest against the country’s sudden turn away from Europe, Putin has consistently denied the agency of the Ukrainian population, insisting instead that the entire uprising was a big Western plot. In addition to blaming the US and EU for Ukraine’s 2013-14 Euromaidan Revolution, Putin has also publicly held them responsible for the ensuing seven-year conflict between Russia and Ukraine.

It is not difficult to imagine why this narrative might appeal to Putin. By pointing the finger at America and Europe, he reduces Ukrainians to the status of passive geopolitical pawns, while at the same time dismissing the dangerously democratic notion of people power. Most important of all, blaming the West allows Putin to distract attention away from his own considerable personal responsibility for the collapse of Russian influence in Ukraine.

By all accounts, Ukraine has played a central role in Putin’s foreign policy thinking ever since he first came to power at the turn of the millennium. In his bestselling 2015 book, “All the Kremlin’s Men: Inside the Court of Vladimir Putin,” Russian journalist Mikhail Zygar states that Putin was obsessed with Ukraine almost from day one of his presidency. This obsession seems to have clouded the Kremlin ruler’s judgment, leading to a series of disastrous choices that have driven Russia and Ukraine ever further apart.

Putin’s first major blunder came in 2004 as Ukrainians were preparing to vote in a presidential election that offered a straight choice between pro-Russian and pro-European candidates. On the eve of the election, the Russian leader arrived in Kyiv amid much official fanfare and proceeded to lecture Ukrainians on how they should vote. This hubris backfired spectacularly, with Putin’s intervention infuriating millions of previously apolitical Ukrainians and serving as one of the main catalysts for the Orange Revolution, which began less than one month later.

Undeterred by his very public humiliation, Putin continued to demonstrate marked disdain for Ukrainian statehood. This included frequent claims that Ukrainians and Russians are “one nation,” along with praise for some of the most Ukrainophobic figures in Russian history. In 2009, Putin spoke approvingly of early twentieth century Russian general and White Army commander Anton Denikin before inviting Russian journalists to read Denikin’s diary entries on Ukraine. “He has a discussion there about Big Russia and Little Russia – Ukraine,” Putin noted. “He says that no one should be allowed to interfere in relations between us; they have always been the business of Russia itself.”

Putin’s most notorious and revealing comments on Ukraine were made to US President George Bush in 2008 during a NATO summit in Bucharest. “You have to understand, George, that Ukraine is not even a country,” he reportedly stated. “Part of its territory is in Eastern Europe and the greater part was given to us.”

While these statements accurately reflect the general tone of Putin’s policies towards Ukraine, their significance pales when compared to the catastrophic consequences of his 2014 decision to launch a military invasion.

Russia’s attack on Ukraine began with the lightning seizure of Crimea. This was followed by efforts to orchestrate anti-Ukrainian uprisings throughout the south and east of the country. More than seven years on, sporadic fighting continues in eastern Ukraine and over 7% of the country remains under Russian occupation.

The conflict has caused a collapse in bilateral ties between the two historically intertwined neighbors, while at the same time directly fueling an unprecedented increase in Ukrainian enthusiasm for Euro-Atlantic integration.

This trend is nowhere more evident than in Ukrainian attitudes towards NATO membership. For many years prior to 2014, support for membership had remained consistently low among the Ukrainian public, with polls typically indicating that between 15% and 25% favored the idea of joining the alliance.

That all changed almost overnight in spring 2014.

In the years following the outbreak of hostilities, Ukrainian support for NATO membership has surged. While figures differ from poll to poll, virtually every survey conducted since the start of the war has produced results that would translate into a landslide “yes” vote in any future NATO referendum. One of the most recent polls, carried out in April 2021 by the Ukrainian Institute for the Future, found that 64% of Ukrainians now back NATO membership, while just 19% are opposed.

Similar shifts in Ukrainian public opinion are equally evident on other key issues such as the country’s ties with the European Union. Meanwhile, enthusiasm for the Russia-led Eurasian Union has plummeted to record lows, with the majority of remaining Ukrainian supporters drawn from among a nostalgic pension-age demographic that will naturally decline in the years ahead.

What can be said of the alleged Western role in this geopolitical divorce of the century?

America, Canada, the UK, the EU, and a host of other leading democratic nations have all welcomed Ukraine’s European choice, while also providing the country with material and diplomatic support in the struggle against Russian aggression. However, in the final analysis, this backing has been relatively modest in character, and has frequently been undercut by concerns over upsetting Moscow.

Notably, neither NATO nor the EU has offered Ukraine anything even vaguely resembling a membership perspective. On the contrary, both organizations have consistently sought to downplay the chances of Ukraine ever joining their ranks.

This ultra-cautious approach would make little sense if the West was indeed plotting to tear Ukraine decisively away from Russia, as Putin claims. In reality, the Ukrainian people are the principle authors of the geopolitical shifts currently underway in their country, and the Western world has had little choice but to respond with a modicum of enthusiasm.

Putin’s eagerness to blame others for the loss of Ukraine is understandable. Throughout his twenty-one year reign, he has demonstrated a keen eye for his place in the pantheon of great Russian leaders, and must be acutely aware that his decision to invade Ukraine looks set to be remembered as one of the most damaging blunders in modern Russian history.

Russia and Ukraine were always destined to drift apart following the breakup of the Soviet Union, but there was nothing preordained about the bitterness of today’s divide. With defter handling, a different Russian ruler might have harnessed the profound social, cultural, religious, historic, political, and economic ties linking the two countries to build a powerful partnership. Instead, Putin has orchestrated the collapse of Russian influence in the country’s traditional imperial heartlands, and he has nobody to blame but himself.

Image: Russian President Vladimir Putin rides a motorbike in Russian-occupied Crimea during a summer 2019 visit. The occupation of Ukraine's Crimean peninsula in 2014 marked the start of an ongoing seven-year conflict that has been disastrous for Russian influence in Ukraine. (Sputnik/Alexei Druzhinin/Kremlin via REUTERS)