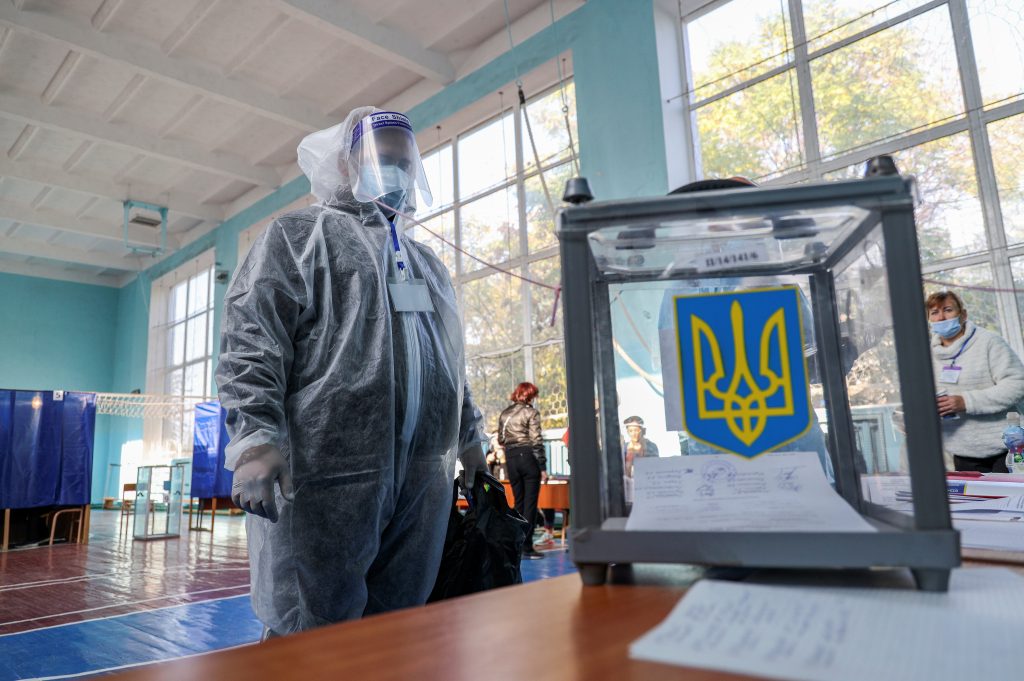 On November 15, Ukrainians will vote in mayoral runoff contests in six major cities. Due to the peculiarities of Ukrainian local election law, individual city election commissions have leeway when deciding the dates for runoff votes. Those cities that finished the vote count quickly following the first round on October 25 have scheduled their elections this weekend. Meanwhile, most cities with runoff elections will hold votes next weekend on November 22. Here is a rundown of what to expect this Sunday.

In Odesa, incumbent Gennadiy Trukhanov faces off against the candidate from the pro-Kremlin Opposition Platform-For Life party, Mykola Skoryk. Trukhanov’s performance in the first round was surprisingly weak, receiving 38% to Skoryk’s 19%. This is because Skoryk took away some of Trukhanov’s traditional Russian-leaning support base.

With candidates from the more Euro-Atlantic inclined European Solidarity and Servant of the People parties finishing third and fourth with 11% and 10% respectively, those votes are now set to swing behind Trukhanov in the runoff and provide the margin of victory. This is somewhat ironic as Trukhanov himself has long been accused of pro-Russian sympathies.

In addition, with Opposition Platform-For Life and Shariy Party having 24 seats combined on Odesa City Council, Trukhanov’s Truth and Deeds party with 20 seats will be forced to include both European Solidarity and Servant of the People (with 10 seats each) in the governing coalition in order to maintain a majority. Ukrainian law requires a mayor to form a majority or run the risk of removal from office. Ukrainian politics does indeed make strange bedfellows.

In Lutsk, the For the Future party, which is backed by oligarch Ihor Kolomoiskiy, is hoping for a breakthrough. For the Future candidate Ihor Polishchuk led in the first round by a 32%-13% margin over former mayor Bohdan Shyba. In 2015, Mykola Romanyuk from the Poroshenko Bloc won a runoff against another Kolomoiskiy-backed candidate. However, Romanyuk died in 2017 and the secretary of the City Council has served as the acting mayor ever since.

Polishchuk is currently an adviser to the acting mayor. His opponent Bohdan Shyba has a long political career in the oblast, having served as a Yushchenko-era governor and later as mayor from 2006-2010. Close Kolomoiskiy ally Ihor Palytsya plays a highly influential role in the local politics of the region. Palytsya, who chairs the For the Future party, is spending heavily and using all available media resources to support Polishchuk’s victory. However, European Solidarity, which finished just 0.4% behind Shyba in the first round, has thrown its support behind the former mayor in the runoff. A high turnout favors Polishchuk, but a lower turnout would help Shyba.

In Kamianets-Podilskiy, the nationalist Svoboda party hopes to repeat the success it enjoyed last month in the oblast’s capital city Khmelnytskiy. In that election, incumbent mayor Oleksandr Symchyshyn won a crushing victory with 87% of the vote. In the oblast’s second city Kamianets-Podilskiy (with a population of about 100,000), the retirement of the two-term incumbent has led to a close race between Svoboda’s Mykhailo Positko, who finished second with 35%, and independent Volodymyr Melnychenko, who led after the first round with 40%. The Servant of the People candidate finished third and received 14%, putting the ruling party in a position to swing the runoff result.

Down in Kherson, there is another open seat due to the retirement of Mayor Volodymyr Mykolayenko, who was first elected via a special election in 2014. Mykolayenko then won decisively over Motherland candidate Vladyslav Manger by a margin of 68%-28% in his 2015 re-election. Manger remains in police custody for his alleged role in organizing and ordering the acid attack on journalist and Mykolayenko adviser Kateryna Handziuk in 2018.

Current Ukrainian MP Ihor Kolykhayev with the For the Future faction was ahead after round one of voting on October 25 with a lead of 31%-17% over former three-term mayor and MP Volodymyr Saldo. Kolykhayev is running under his own We Live Here party. Running as an independent, he defeated a Servant of the People challenger in the parliamentary elections last year.

His challenger Volodymyr Saldo was first elected mayor in 2002 and then re-elected in 2006 and 2010. He became an MP in 2012 and joined the Party of Regions faction, which created a vacancy in the mayor’s office, eventually leading to the election of Mykolayenko in 2014. His faction elected nine deputies to the city council, but if Saldo wins the mayor’s election, they will have difficulty forming a majority without Opposition Platform-For Life (11 deputies) and Servant of the People (10 deputies). Thus, the dynamics favor Kolykhayev, but never count out a three-term mayor.

In Sumy, Yulia Tymoshenko’s Motherland Party is in a strong position to win the mayor’s post again. Their candidate, the incumbent Oleksiy Lysenko, led the European Solidarity candidate Vadym Akryepov by a commanding 44%-15% margin in round one. However, forming a governing coalition in the city council after the election may prove tricky. Motherland won 13 seats, with European Solidarity and Opposition Platform-For Life each receiving nine. Servant of the People has eight seats, while Smeshko’s Strength and Honor has three. To secure a majority, the incumbent mayor must either partner with European Solidarity or invite both Servant of the People and Strength and Honor into the governing coalition.

Finally, in eastern Ukraine’s Kramatorsk, incumbent Andriy Pankov nearly lost outright to independent challenger Oleksandr Honcharenko in round one last month. Honcharenko received 49% to Pankov’s 35%, coming within 554 votes of winning. Back in 2015, Pankov prevailed in a runoff against MP Maksym Yefimov by a narrow 51%-46% count. Yefimov lost that election but won re-election to parliament decisively last year with 55% of the vote, and his Team Maksym Yefimov-Our Kramatorsk faction will now hold 12 of 42 seats on the Kramatorsk city council (with Opposition Platform-For Life holding 14). Yefimov will clearly play a role in the future of the city, while his old rival Pankov looks set to struggle in this weekend’s vote.

Image: Runoff votes will take place to elect municipal officials in a host of Ukrainian cities on November 15. (REUTERS/Stanislav Kozliuk)