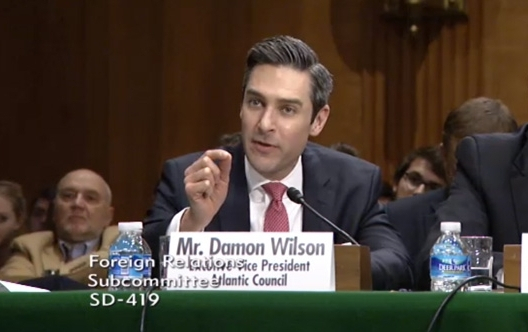 Wilson: Only the US Can Lead in Defending Europe Against Putin’s Rising Ambition

The United States and its allies must confront the aggressive actions of Russian President Vladimir Putin because failing to do so will escalate his ambitions—perhaps to the point of forcing a war with NATO, the Atlantic Council’s Damon Wilson told the US Senate this week.

And the United States must lead, because no European country is strong enough to do so against a Kremlin that increasingly targets not just Russia’s ex-Soviet neighbors but the democracy and unity of Europe, Wilson said. The US government should galvanize a strategy including tightened economic sanctions on Russia, arms supplies for Ukraine’s defense, and a financial commitment similar to those for other major crises such as the Ebola outbreak and the ISIS war in the Middle East, he said.

“The choice we face … is not between fighting Russia or doing nothing,” Wilson said in testimony to the Senate Foreign Relations Committee. “Rather, I believe doing nothing may lead to our fighting Russia.” After months of “Western hesitancy on Ukraine, Putin has become more brazen, increasing the risk of an inadvertent collision,” he said.

The year-long expansion of war in Ukraine illustrates that President Putin is by nature an opportunist who expands his objectives when he sees space to do so. One year ago, “Putin first probed with little green men [small units of Russian troops operating without insignia] to determine his freedom of maneuver in Crimea,” Wilson said.

“In the absence of resistance,” Putin has expanded both the territory he has seized in Ukraine and the military forces he is using, Wilson said. The US military estimates that 12,000 Russian troops are now operating in Ukraine, its top Army general in Europe said this week.

Alongside those Kremlin army regulars fights a Russian-directed “proxy forces”—units of paramilitaries, army veterans and other mercenaries—that “command greater quantities of the most advanced heavy weaponry than most European NATO nations,” Wilson said in a hearing by the foreign relations subcommittee on European affairs.

Putin’s minimal goal now is to re-assert Russia’s generations of domination over its former Soviet neighbors—notably Ukraine, Georgia and Moldova, which have tried to associate with the European Union—and thereby to also strengthen his authoritarian regime at home. But the more he succeeds in that campaign, the more he focuses on what he knows is “the best check on his power”—the transatlantic community of the United States and its allies, Wilson said.

A serious risk is growing that Putin may be emboldened to try his semi-covert, hybrid warfare against NATO’s Baltic member states, said Wilson, who served in 2007 to 2009 as a special assistant to the president and senior director for European affairs at the National Security Council.

“The most tempting objective for Putin is to call into question the credibility of NATO’s Article 5 mutual defense commitment, as doing so would effectively end both NATO and America’s role as a great European power,” Wilson told the Senate subcommittee.

Why Europe Cannot Lead Against Moscow

“Only US leadership in this crisis” can “ensure the sustained resolve of our allies, most of who are bearing a far greater economic cost to their own economies,” Wilson said.

“Russia is too big, too strong, and too scary for Europe to resolve this without us.” While Germany’s Chancellor Angela Merkel “has done a remarkable job in holding Europe together in this crisis, no European state can afford to get into a confrontation with Russia in the absence of US leadership and resolve.”

A US-led strategy should envision “a Europe whole, free, and at peace that embraces democratic nations in Europe’s east and in which Russia can find its peaceful place in Europe,” Wilson said. Elements of that strategy should aim to “raise the costs” to Putin of further military offensives and other aggression, he said, and should include these:

A US strategy to confront Putin “should neither abandon the Russian people nor the vision that a democratic Russia one day can find its peaceful place” in Europe, Wilson said. “Indeed, if we rise to the occasion, the United States can ensure that the vision of a Europe whole and free including democratic states in Europe’s East becomes a reality.”