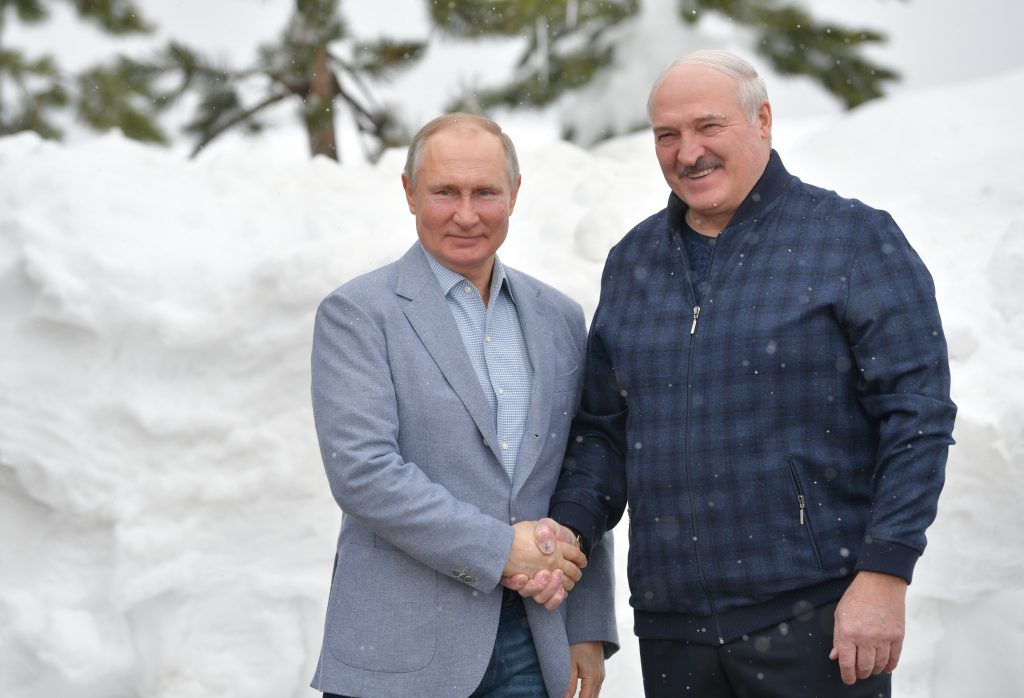 Russian President Vladimir Putin shakes hands with his Belarusian counterpart Alyaksandr Lukashenka during a meeting in Sochi on February 22. (Sputnik/Alexei Druzhinin/Kremlin via REUTERS)

The Biden administration has lost no time making clear that it will not let the unprecedented and ongoing human rights violations in Belarus go unnoticed. On February 18, US Secretary of State Anthony Blinken announced that the State Department was imposing visa restrictions on an additional 43 individuals “responsible for undermining Belarusian democracy.” This brings to 109 the total number of individuals under visa restrictions for their roles in the fraudulent August 9, 2020 Belarusian presidential election and the subsequent violent crackdown against pro-democracy protests.

The latest round of Belarus sanctions is a firm and important move. But is it enough? Do visa restrictions really matter to Alyaksandr Lukashenka and his inner circle? If not, then what is important to them?

In terms of his political survival, nothing is currently more important to Lukashenka than his relationship with the Kremlin. On February 22, just four days after Blinken’s announcement, the Belarusian dictator was in Sochi to meet with his Russian counterpart, Vladimir Putin. According to Lukashenka himself, he was “not going to ask Putin for anything,” but planned “to discuss some areas of cooperation.”

When they last met in September 2020, the Minsk strongman walked away with a lifeline of USD 1.5 billion in credits, giving him the financial independence to continue a violent crackdown against pro-democracy protesters, civil society, and the press without having to worry too much about international blowback. This time, there are rumors that he asked for twice this amount.

Even if the conversation was limited to “cooperation,” as Lukashenka suggested, that is not a benign prospect. Who better to cooperate with on the issue of putting journalists and opposition figures behind bars, if not Putin?

Russia, empowered by its unconditional return to the Parliamentary Assembly of the Council of Europe (PACE) in 2019, has predictably continued to ignore PACE rules. For the first time ever, the Russian government officially refused to fulfill a requirement of the European Court of Human Rights to release opposition politician Alexei Navalny. In terms of domestic repression and disregard for international obligations, there is certainly plenty for Lukashenka to learn from his neighbor.

Monday’s meeting in Sochi coincided with an unprecedented crackdown on independent media and human rights organizations back in Belarus. On February 16, Belarusian police searched the homes and offices of more than 30 journalists and human rights defenders. Days later, two Belarusian journalists of the Poland-based broadcaster Belsat, Katsiaryna Andreyeva and Darya Chultsova, were sentenced to two years in prison for reporting on protests.

The unjust persecution of journalists is nothing new for Lukashenka, but a two-year sentence for streaming a protest is a new low even by the standards of the Belarusian government. This sentence has been widely interpreted as a signal intended to cow any remaining independent journalists in the country. It clearly reflects the confidence that Putin’s backing offers Lukashenka.

The European Union must now deal with Russia’s defiance of the European Court of Human Rights ruling on the Navalny case. At a meeting on February 22 of the EU Foreign Affairs Council, 27 EU ministers discussed possible EU actions towards Russia. German Foreign Minister Heiko Maas commented that individuals in Russia’s judiciary could face EU sanctions in the coming days in relation to Navalny.

As European leaders look to impose sanctions on Russia for human rights abuses, it is crucial that the EU does not overlook Moscow’s vital role in empowering Lukashenka. Ever since the current crisis in Belarus first erupted in August 2020, Russian support for the Lukashenka regime has made the ongoing crackdown possible.

The EU has already determined that the Belarusian presidential election in August 2020 was neither free nor fair. It should not ignore Russia’s involvement in continuing to prop up an illegitimate government that is engaged in a sustained campaign of human rights violations.

Despite repeated calls from the international community, the Belarusian government has made no effort to resolve the situation and has rejected any form of dialog with protesters. If anything, the Lukashenka regime’s abuses are actually becoming even more brazen.

In laying the foundation for revitalizing US diplomacy, Secretary Blinken has said that “America at its best still has a greater capacity than any other nation on earth to mobilize others for the better.” Belarus presents an opportunity for the US to partner with the EU in order to ensure that pressure is maintained not just on Alyaksandr Lukashenka, but on his enabler Vladimir Putin as well.

Polina Sadovskaya is Program Director for Eurasia at PEN America.