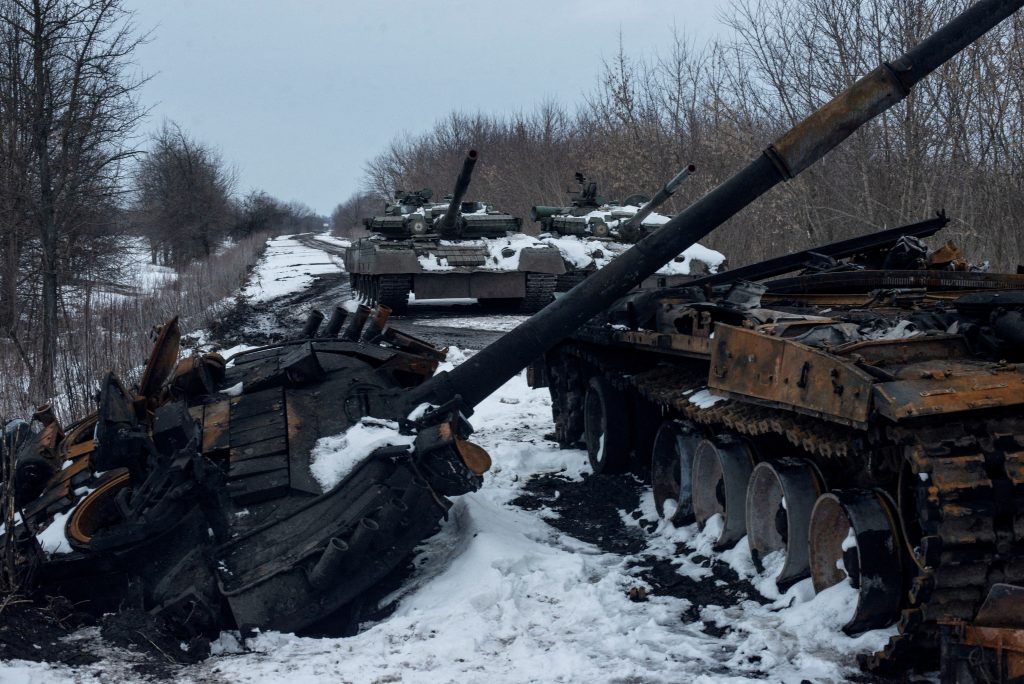 Russian President Vladimir Putin’s invasion of Ukraine is not going according to plan. When he made the decision to invade, Putin seems to have sincerely believed Ukrainians would lay down their arms, the government would fold, and the world would stand by as Russian troops easily swept through to the capital Kyiv. Instead, his army has suffered devastating losses and has met with fierce popular resistance throughout Ukrainian society while also provoking unprecedented levels of international condemnation that have united the Western world and transformed Russia into a global pariah.

It is already painfully clear that Putin will not be able to achieve his political goal of forcing Ukrainians into surrendering their sovereignty and accepting a new era of Russian domination. Instead, he now has only two plausible options. Russia’s ruler can either escalate the war further with an ever more brutal campaign to physically eradicate any Ukrainian opposition, or recognize the reality of his predicament and seek to end the carnage.

The spectacular unraveling of Putin’s invasion is all the remarkable given the long planning period that preceded the February 24 order to advance. In the months leading up to Russia’s attack, Putin concentrated his forces around Ukraine while plotting with his generals to crush Ukrainian resistance with a series of lightning strikes. However, the resulting offensive has shown little evidence of meticulous preparation. On the contrary, it brings back memories of earlier Russian military fiascos such as the Czarist defeat to Japan and the disastrous 1939 Soviet invasion of Finland.

Ukraine’s formidable military performance has surprised the world, with Russian losses in barely three weeks nearly matching two decades of US losses in Iraq and Afghanistan combined. Russia has lost multiple high-ranking generals and thousands of troops as well as vast quantities of armor. These humiliating setbacks have left Putin enraged and in search of scapegoats. In recent days, he has reportedly placed senior intelligence chiefs under house arrest.

Meanwhile, the Russian economy is undergoing one of its worst crises in decades as the value of the ruble plummets to record lows and foreign companies withdraw. This is destroying a central pillar of Putin’s unofficial pact with the Russian people, whereby he has guaranteed increasing economic prosperity in exchange for public acceptance of a return to a one-party state.

If Putin chooses to continue throwing his invasion force of professional soldiers, conscripts, imported Syrians and perhaps soon-to-be-dragged-kicking-and-screaming Belarusian forces into the Ukrainian meat grinder, his choices are truly limited. He may yet be able to pummel his way to temporary control of Kyiv, but any attempt to install a puppet regime would be doomed from the outset. Ukrainians have made it clear that they will not accept any Kremlin Quislings.

The Ukraine that has emerged following the Soviet collapse and especially since the 2014 Revolution of Dignity is very different from the distorted stereotypes promoted by Putin and the Kremlin elite. Unlike modern Russia, Ukrainians expect democratically elected leaders who are held accountable and ejected when they lose elections. As Kurt Volker put it just before the invasion, “Because Ukraine exists as an independent national identity, one which sees itself as part of a greater democratic tradition of values and ideals, Russian occupation can never be successful.”

Any attempted Russian occupation would lead to a far larger version of the Kremlin’s bloody post-Soviet wars in Chechnya, with many Ukrainian towns and cities suffering the fate of Grozny. Russia’s reported plans for the purging of Ukraine’s civil society, activists, intellectuals, and leaders are currently underway in occupied parts of the country. There has also been talk of internment camps and public executions. Russia has already committed numerous war crimes by bombing hospitals, schools, and civilian areas indiscriminately. Putin would respond to an insurgency by further escalating atrocities against the civilian population.

The difference is that unlike Chechnya and Russia’s other military ventures in recent decades, the world has rallied around Ukraine. International audiences are watching Ukraine closer than ever. In this environment of intense scrutiny, further Russian crimes against humanity could eventually force the West to isolate Russia completely. This would be unpopular with ordinary Russians and the country’s elite. If Putin stubbornly continues to escalate his war in Ukraine, it could prove his downfall.

Putin’s only alternative is to end the war in a face-saving manner while trying to extract concessions from Ukraine. Many of the most recent sanctions will remain, especially those targeting Russian oligarchs who have stashed their money in the West for years and continue to present a national security threat to the United States and its allies. But multinational companies that have severed ties over the war can be lured back.

Putin has committed one of the gravest crimes of the twenty-first century and owes reparations to Ukraine to rebuild the country. Russia’s ruler has an enormous price to pay for his crimes and deserves to be brought before an international tribunal alongside those who followed his orders.

Whether that eventually happens or not, Putin now only has two cards to play: either he goes all in by escalating his lost cause and guarantees his own eventual downfall, or he rolls the dice and ends the fighting. His legacy is now hopelessly tarnished by the horrors of the past three weeks, but he could still cling to power and potentially pave the way for a more dignified exit in the coming years if he calls off his criminal invasion.

Doug Klain is an Assistant Director at the Atlantic Council’s Eurasia Center. Find him on Twitter @DougKlain.

Image: A charred Russian tank and captured tanks are seen in the Sumy region, Ukraine. March 7, 2022. (Irina Rybakova/Press service of the Ukrainian Ground Forces/Handout via REUTERS)