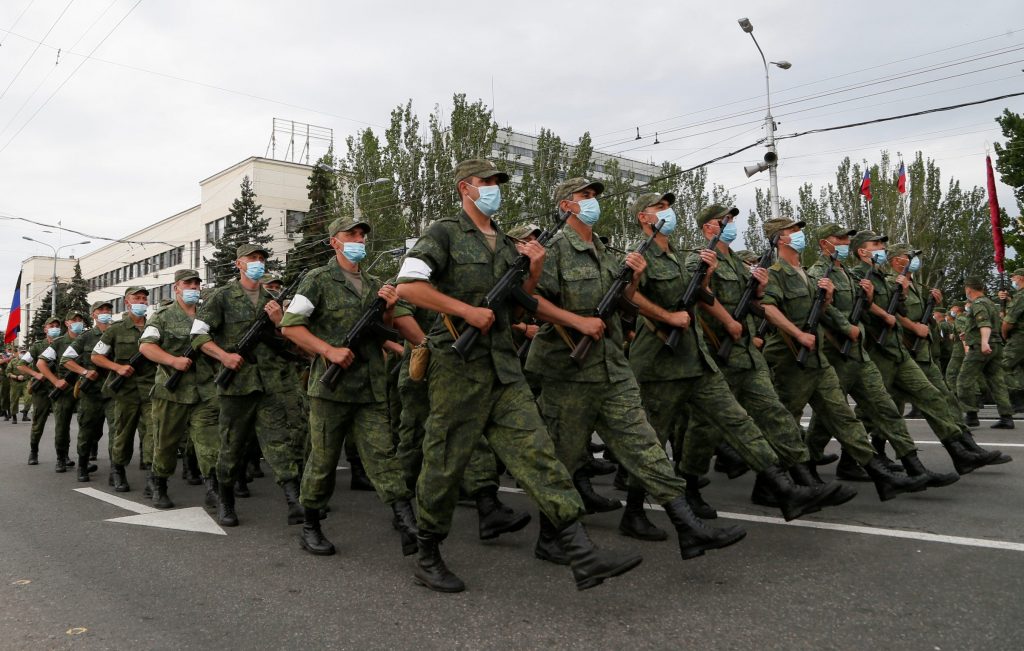 While geopolitical attention focuses on Belarus, Putin’s hybrid war in neighboring Ukraine continues. Currently in its seventh year, this complex campaign of international aggression features everything from traditional military components to economic, informational, religious, and cyber dimensions. It has already brought the world to the brink of a new Cold War, and there is currently no end in sight to the conflict.

Ever since 2014, international efforts have concentrated on ending the shooting war in eastern Ukraine. This has proven only partially successful. The latest in a long line of ceasefires came into effect in late July, offering cause for renewed optimism. However, even if this ceasefire proves more durable than the many previous failed attempts, large swathes of eastern Ukraine will remain under Russian occupation. Furthermore, over the past year, the Kremlin has moved to cement its hold over these occupied regions via the mass distribution of Russian passports.

Moscow announced its new passport policy within days of Ukrainian President Volodymyr Zelenskyy’s April 2019 election victory. The move was widely interpreted as a signal that Russia does not intend to seek a compromise peace with Ukraine despite the country’s change in leadership. On the contrary, Russian officials hope to distribute one million passports in occupied eastern Ukraine by the end of 2020, transforming the region into a passport protectorate. This makes the future reintegration into Ukraine of the occupied east virtually impossible and serves as one of the most glaring examples of Russia’s ongoing efforts to undermine Ukrainian sovereignty.

Ukraine’s Foreign Intelligence chief Valeriy Kondratyuk outlined the scope of Russia’s hybrid aggression in a far-reaching article published in early August 2020. The Kremlin’s strategic goals remain unchanged, he noted. These include the return of Ukraine to the Russian zone of influence and the elimination of a separate Ukrainian national identity.

While working closely with the Russian Orthodox Church, the Kremlin is seeking to establish pro-Russian “Cossack” paramilitary formations within the framework of Orthodox religious communities across Ukraine and empower them with local public order responsibilities. Instances of such activity have been identified in Kyiv, Vinnytsia, and Zaporizhia oblasts, says Kondratyuk.

The Kremlin’s recent activities in Zaporizhia and other parts of southern Ukraine are particularly alarming given the potential for renewed Russian military activity in the region. Since seizing Crimea from Ukraine in 2014, Russia has been unable to resolve the problem of the occupied peninsula’s water supply. This has sparked speculation of a fresh offensive to secure access to the Dnipro River, which formerly provided Crimea with up to 80% of its water needs via the North Crimean Canal. Any Russian military incursion towards the Dnipro River would need to take control of Kherson Oblast, with further expansion into Mykolaiv and Zaporizhia oblasts probable.

In July 2020, the Ukrainian Security Service detained a group of pro-Russian separatists in Zaporizhia who were seeking to launch the “Zaporizhian People’s Republic”. These pro-Russian activists and self-styled “Cossacks” had been in hiding in the Kremlin-controlled Luhansk People’s Republic before secretly returning to Zaporizhia to resume their separatist activities. During the arrest, the Ukrainian Security Service confiscated a range of Russian and separatist paraphernalia along with ammunition.

Zaporizhia and other regions of strategically sensitive southern Ukraine such as Kherson and Mykolaiv have recently become targets of Russian information warfare campaigns. The aim appears to be a reduction in local anti-Russian sentiment and the erosion of support for the Ukrainian authorities in Kyiv. While the Kremlin seems to have belatedly recognized the futility of attempting to foster outright enthusiasm for a Russian takeover, the objective now is to soften up the south of the country and pave the way for the advance of pro-Russian political parties in October’s Ukrainian local elections.

This Russian information offensive in southern Ukraine is a localized extension of a nationwide effort that seeks to promote anti-Western narratives and discredit Ukraine’s post-2014 Euro-Atlantic trajectory. This campaign relies heavily on the expanding media empire of Viktor Medvedchuk, the veteran pro-Russian Ukrainian politician who leads the Kremlin-friendly Opposition Platform-For Life party and reportedly owns a growing portfolio of Ukrainian TV channels. Medvedchuk, who recently holidayed in Russian-occupied Crimea, counts Vladimir Putin as a personal friend (Putin is godfather to Medvedchuk’s daughter), and is the most outspoken public advocate of Ukraine’s return to the Russian orbit.

Meanwhile, Russia is also maintaining its unofficial naval blockade of Ukraine’s Azov Sea coastline as part of efforts to strangle the Ukrainian economy and destabilize local communities in the south of the country. This systematic harassment of Ukrainian shipping first made the news in late 2018 following the completion of the Crimean Bridge linking the occupied peninsula to the Russian mainland. The blockade is no longer in the headlines, but it continues nonetheless.

According to data released in mid-August by the Black Sea Institute of Strategic Studies, the average length of artificial delays encountered by Ukraine-bound shipping due to Russian interference in the Azov Sea during July 2020 was 21.4 hours, or almost double the figure for the previous month. This obstruction causes significant damage to local economies in the regions of southern Ukraine that are most at risk from an escalation in Russian aggression.

Kremlin efforts to destabilize southern Ukraine and undermine Ukrainian national identity are unlikely to succeed in transforming the situation in Moscow’s favor. Support for the “Russian World” was already relatively low in Zaporizhia, Mykolaiv, and Kherson regions in 2014 when Putin first launched his hybrid war. It has diminished further over the past six years of conflict, with polls consistently demonstrating the growth of pro-Ukrainian sentiment.

Few expect these unfavorable realities to deter Moscow. Putin’s thinking on Ukraine appears clouded by emotions and driven by a reluctance to acknowledge the damaging repercussions of his own aggressive policies. Despite considerable evidence pointing to the catastrophic erosion of Kremlin influence in Ukraine, Putin refuses to accept the historic loss of a country that has been part of the Russian imperial heartlands for over three centuries. Instead, the Russian dictator continues to repeat his belief that Ukrainians and Russians are “one people” while arguing that outside forces have artificially separated the two nations.

Putin’s comments reflect the fact that many in Russia have yet to come to terms with Ukrainian statehood. This was one of the key causes of Russian aggression in 2014, and it remains a major obstacle to peace. In his assessment of the national security situation published earlier this month, Ukrainian Foreign Intelligence chief Kondratyuk concluded that the current Russian authorities will never accept the existence of an independent, united, and Western-oriented Ukraine. Instead, he warned Ukrainians that the current hybrid war is likely to continue indefinitely.

It is important for the international community to hear this message. Diplomatic efforts have long focused on ending the shooting war in eastern Ukraine, but Kyiv’s Western partners must also recognize that this alone will not solve the problem of Russian imperial aggression in Ukraine. Putin’s hybrid war involves much more than traditional armed force. The Kremlin campaign is diverse and sophisticated, with the clear goal of undermining Ukrainian sovereignty. It will remain a threat to European security and global stability until Russia finally comes to terms with the reality of an independent Ukraine.