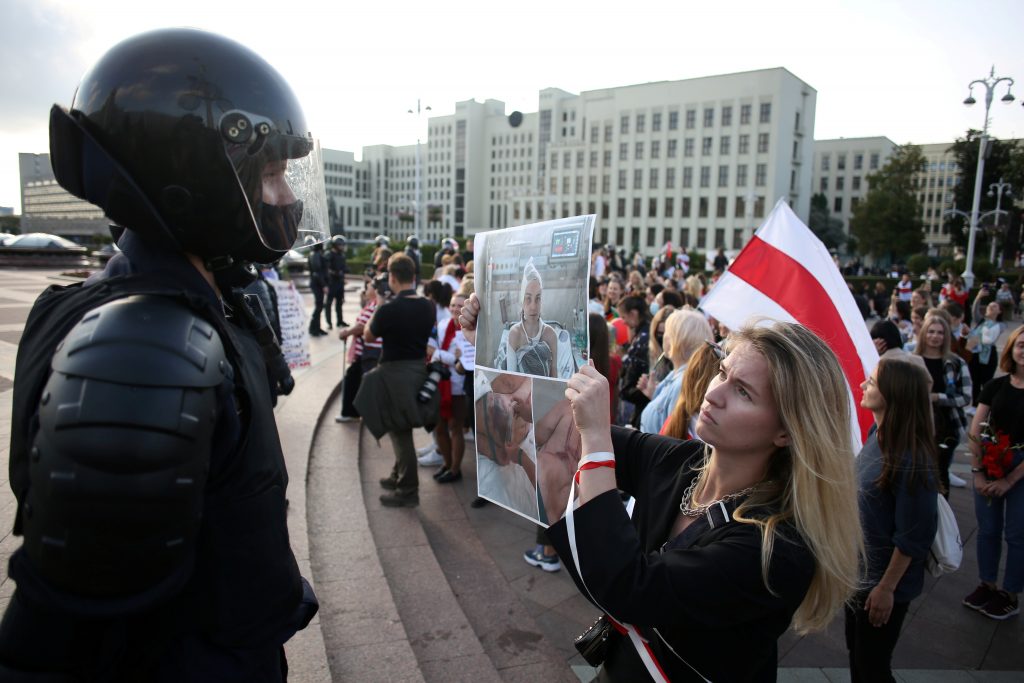 As the crisis in Belarus has unfolded over the past month, there has been a growing sense of deja vu about the Russian response. Officials and media in Moscow have attacked the Belarusian pro-democracy protests as the work of extremists and foreign agents, while at the same time warning of a nationalist threat and drawing emotionally explosive parallels to the WWII Soviet struggle against Nazism. These narratives are not new. They directly echo the Kremlin reaction to the 2004 and 2014 pro-democracy uprisings in neighboring Ukraine.

Moscow’s lack of originality should come as no surprise. This script sells itself in modern Russia, where attitudes towards the former captive nations of the Soviet and Tsarist eras remain strikingly imperialistic and few question the ethics of continued Russian domination. Such thinking makes it all too easy for the Kremlin to demonize non-Russian national awakenings in the post-Soviet world as little more than treacherous Russophobia. It also obscures the nation-building processes that began in 1991 and are still very much underway.

Similar claims of Russophobic nationalism have also been at least partially embraced by a significant number of academics and Putin sympathizers in the West, reflecting the continued dominance of russocentric thinking towards the former Soviet world. This needs to change if the international community wishes to fully grasp the implications of the geopolitical turbulence generated as nations in the post-Soviet region shake off generations of russification and embrace independent identities. An appreciation of this post-imperial process is key to understanding the crisis in today’s Belarus and deciphering the dramatic shifts taking place within Ukrainian society. It also offers the best chance of predicting how the region will develop in the years ahead.

Far from representing anti-Russian extremism, the nation-building processes in countries like Belarus and Ukraine are a natural and necessary response to an epoch of Russian domination that stretches back hundreds of years. Across the former USSR, the non-Russian republics are now asserting national identities that inevitably diverge from the imposed visions of the imperial past. This is creating novel perspectives for international audiences previously accustomed to viewing the region exclusively through a Russian lens.

Nowhere is this more evident than in Ukraine. As the largest of the non-Russian Soviet republics in terms of population and the country with the longest experience of Russian imperial rule, post-Soviet Ukraine’s nation-building journey has been particularly challenging. Nevertheless, the scale of Ukraine’s progress since 1991 towards an independent national identity makes a mockery of Kremlin attempts to dismiss this historic development as the work of extremists and outsiders.

Moscow’s ongoing information war against Ukrainian identity ignores the broad societal changes taking place in the country while exaggerating the influence of radical elements. This includes amplifying small-scale events and marginal figures in order to create the illusion of national significance. As part of this agenda, the Kremlin has frequently been accused of orchestrating far-right rallies and staging extremist incidents in Ukraine. Indeed, during a recent prisoner exchange between Kyiv and Moscow in early 2020, one particularly notorious “Ukrainian neo-Nazi” was even handed over to Russia at the Kremlin’s request. The case of Edward Kovalenko illustrates Russia’s long history of nurturing “fake fascists” for propaganda purposes and raises questions over the credibility of other fringe groups in Ukraine whose primary function seems to be serving as bogeymen for Kremlin TV and credulous international correspondents.

In reality, despite the polarizing influence of the ongoing war with Russia, far-right political parties have failed to make any electoral impact at the national level in Ukraine. During Ukraine’s wartime presidential and parliamentary elections of 2014 and 2019, support for nationalist parties remained firmly rooted in the low single digits. This is far lower than the backing received by similar parties during recent elections in numerous EU member states.

Meanwhile, the landslide victory of Russian-speaking Jewish candidate Volodymyr Zelenskyy in the April 2019 Ukrainian presidential election illustrated a side of Ukraine’s nation-building journey the Kremlin prefers not to acknowledge. Zelenskyy’s election was the most emphatic evidence to date of an emerging civic identity in independent Ukraine that moves beyond the traditionally narrow confines of language and ethnicity to reflect the realities of the modern Ukrainian nation.

This civic national identity has been evolving organically since the dawn of Ukrainian independence in 1991, but the process has accelerated dramatically following the outbreak of hostilities with Russia in 2014. The Russian-Ukrainian War, which is how two-thirds to three-quarters of Ukrainians view the conflict in the Donbas, is being fought on the Ukrainian side predominantly by Russian-speaking Ukrainians. While Ukrainian is also widely spoken on the front lines, it is the Russian-speaking contingent that dominated many of the leading volunteer battalions in 2014, before being integrated into Ukraine’s military and security forces.

This linguistic pluralism is mirrored in the ethnic makeup of Ukraine’s defenders. Significant numbers of Georgians, Crimean Tatars, Chechens, Belarusians, and Russians have fought for Ukraine since 2014, while the various branches of the Orthodox faith have been joined by other Christian denominations along with Jewish and Muslim contingents.

The conflict has exposed the shortcomings of traditional Russian efforts to divide Ukraine geographically into nationalist and pro-Kremlin camps. Dnipropetrovsk Oblast, which is firmly within the predominantly Russian-speaking heartlands of eastern Ukraine, has suffered the highest military casualties in all Ukraine. It treats large numbers of the Ukrainian military’s wounded and is home to the country’s first memorial museum documenting the conflict. Meanwhile, western Ukraine has the highest incidence of draft-dodging, despite being routinely depicted by the Kremlin as the source of all nationalistic sentiment in modern Ukraine.

The evolving nature of national identity in independent Ukraine can also be seen in changing attitudes towards language. While language issues are still often exploited in the Ukrainian political arena, opinion surveys indicate surprisingly high levels of consensus and a growing mood of tolerance across Ukraine on key aspects of the language debate.

A comprehensive nationwide survey conducted by the Razumkov Center and Kucheriv Democratic Initiatives Foundation in late 2019 found widespread acceptance of Russian-speaking Ukrainian patriotism. At the same time, there was broad agreement over the role of the Ukrainian language as an important marker of independence, with acceptance levels ranging from 95% in the west and 86% in the center of the country to between 64-71% in the east and south. Strong majorities of Ukrainians in all regions also agreed that at least half of national media should be in Ukrainian. In other words, a more nuanced picture is emerging where language no longer defines identity but is recognized as an important national symbol.

The growing number of Ukrainian citizens who self-identify as ethnic Ukrainians is a further indication of Ukraine’s strengthening post-imperial national identity. According to data from 1989, ethnic Russians made up 22% of the Ukrainian population. By the time of the 2001 Ukrainian census, this figure had dropped to 17%. More recent data from a 2017 poll conducted by the Gorshenin Institute and Germany’s Friedrich Ebert Foundation indicated that the number of people in Ukraine who identified as ethnic Russian had fallen to below 6%. While this decline may be partially due to migration flows since the fall of the USSR and the temporary exclusion of ethnic Russian Ukrainians in occupied Crimea and eastern Ukraine, it also suggests a growing readiness of Ukrainian citizens from different backgrounds to see themselves as Ukrainian.

Taken together, these developments indicate that Ukraine has achieved significant success in its civic nation-building efforts. The increasingly civic nature of modern Ukrainian identity is evident in the tendency of Ukrainians to direct any feelings of war-related animosity towards Russia’s political leaders rather than the Russian people. A Pew Research Center survey of Ukrainian public opinion conducted last year found that approval of Vladimir Putin had plummeted between 2007 and 2019 from 56% to just 11%. Meanwhile, February 2019 research by the Kyiv International Institute of Sociology found that 77% of Ukrainians had a positive attitude towards Russians in general. This diverges strongly from Kremlin propaganda narratives of Russophobic Ukraine and suggests that greater Russian respect for Ukrainian sovereignty could lead to rapid improvements in bilateral ties.

The biggest barrier to better relations between Russia and other former Soviet republics may well be Russia’s own reluctance to treat its former vassals as equals. The Kremlin demonizes nation-building elsewhere in the former Russian Empire, but the most toxic post-Soviet national identity is arguably that of Russia itself. During the two decades of Putin’s reign, revanchist sentiments and openly imperialistic rhetoric have become everyday features of the Russian national discourse. Nor are these merely words. The ongoing Russian occupation of whole regions in Ukraine, Georgia, and Moldova reflects the Kremlin’s willingness to back up its revisionist world view with military might.

Recent experience strongly suggests that Russia’s uncompromising approach towards the country’s former imperial possessions is counter-productive. Moscow’s six-year war in Ukraine has had a catastrophic impact on Russian influence. The Kremlin’s increasingly open intervention in Belarus could soon have a similarly negative effect on Belarusian attitudes towards Russia. Putin’s bid to prop up the Lukashenka regime in Minsk may prove successful in the short term, but it is likely to profoundly damage Russia’s standing among a new generation of Belarusians who are experiencing a national awakening but who might otherwise have been ready to maintain friendly relations with Moscow.

Russia’s aggressive reaction to nation-building in Belarus and Ukraine reflects Moscow’s failure to come to terms with the loss of empire. Modern Russia still bristles at the new reality of former colonies asserting their statehood in ways that challenge long-established imperial dogmas. Until this changes, the post-Soviet region will remain a source of geopolitical instability. Meanwhile, Putin’s “Russian World” will continue to shrink as Moscow’s outdated imperialism alienates the country’s natural allies.

Image: A woman in Minsk confronts a member of the Belarus security services with images of injuries inflicted during the country's crackdown on pro-democracy protests. Kremlin support for Belarus dictator Alyaksandr Lukashenka has helped prop up his regime but is also fueling anti-Russian sentiment in the country. (Tut.By/Handout via REUTERS)