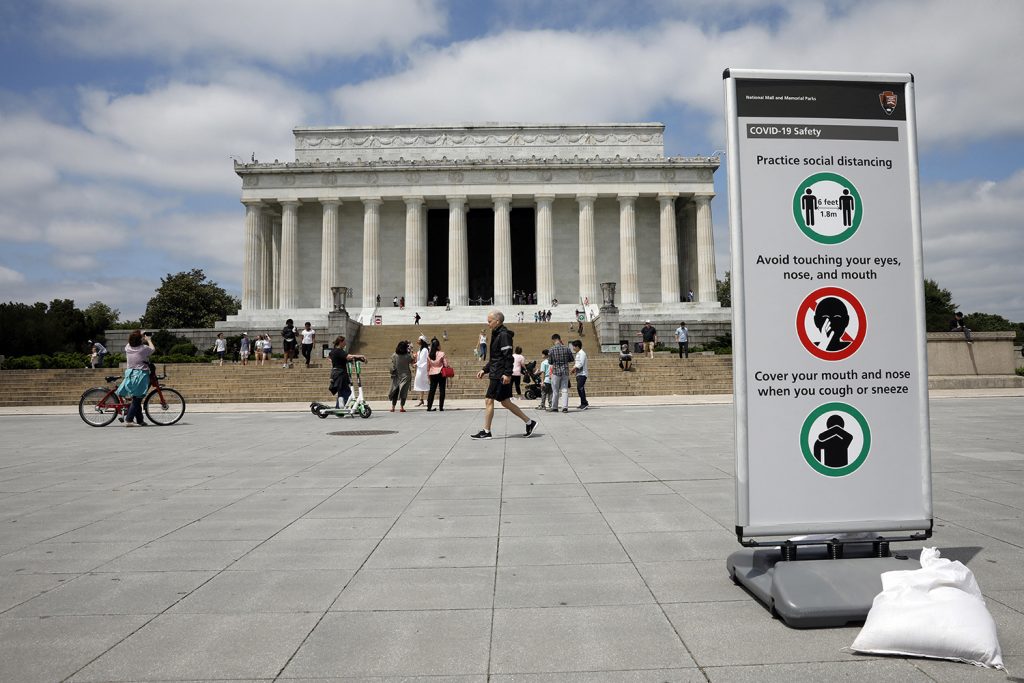 People visit the Lincoln Memorial on the National Mall in Washington on May 25, 2020. Traditional Memorial day parade and Rolling Thunder were canceled due to the coronavirus disease (COVID-19) outbreak. Photo by Yuri Gripas/ABACAPRESS.COM

This column has raised many questions pertinent to the coronavirus. Why, for example, has the US stock market remained so vibrant despite record global unemployment and dramatic economic decline? Despite whatever US President Donald J. Trump does, for good or ill, how does he sustain 42 to 43 percent levels of approval and support? And finally, why have the lessons of the economic boom that immediately followed the 1918-20 Spanish flu epidemic been ignored?

A much more important question, however, needs addressing. Is the greater danger posed by COVID-19 to America’s political health, rather than public health? In times of crisis, from the Japanese attack on Pearl Harbor on Dec. 7, 1941 to the terrorist attacks of Sept. 11, 2001 a divided nation unified to deal with the threat or danger. Yet, the coronavirus pandemic has further divided the nation across party lines. Some 80 percent of Republicans believe the Trump administration is responding well to the crisis. An equal level of Democrats hold diametrically different views.

Similar partisan divisions reflect support for maintaining strict rules of physical distancing and keeping the economy shut down and the need to reopen the economy in order to begin a recovery. After Pearl Harbor, while a relatively tiny slice of Americans remained in opposition, the vast majority of Republicans and Democrats agreed on fighting a world war to defeat the existential threat of fascism. After Sept. 11, Republicans and Democrat coalesced on battling violent extremism and destroying al-Qaeda.

That same unity is not only missing in action today, the coronavirus has exacerbated partisanship and animosity between the two political parties, further widening huge political divides. Neither party is prepared to propose policies and strategies that rise above partisanship. The coming election adds even more political gasoline to this conflagration.

As bad, given the Trump administration’s America first policies, international cooperation and coordination to defeat COVID-19 likewise are missing in action. The United Nations, World Health Organization, G7, G20, Association of Southeast Asian Nations, European Union, and NATO have been sidelined. Given the growing conflicts with China over the handling of the coronavirus, intellectual property theft, trade, and other issues that seem to be worsening, the outlook is not good for greater international cooperation.

What is to be done? First, the virus has a huge and probably decisive vote. If, over the next few weeks, reopening does not spark a spike in infections or a resurgence of the disease in America, many will understandably conclude the worst is over. And if, later in the year, the pandemic does not cause a second wave of outbreaks, this conclusion will be reinforced.

Of course, America is not alone in battling this pandemic. Thus far, the Southern Hemisphere has not experienced the same level of infections and contagion. In the Northern Hemisphere, South Korea and China, among others, have experienced re-infections. Nor has Europe seen the virus running its course. Indeed, the Spanish flu became more virulent after 1918 and the first wave of infection.

That leaves two courses of action. In the best case, the pandemic will be a short-run thing. The likely response will be getting back to business as it was. But that cannot happen. The virus is now a persistent part of the environment. Many of the jobs lost cannot be restored. Certain sectors of the economy, such as airlines, hospitality and real estate, will take more than a few years to recover.

If the virus does not recede, then returning to societal restrictions will persist until vaccines or treatments are found or coronavirus dissipates of its own accord. The problem and reality, regardless of the course of action, are that partisanship and animosity are worsening. Neither Republicans nor Democrats are likely to embrace bi- or non-partisan policies in the aftermath.

Presidential leadership is essential. Donald Trump shows no sign nor interest of reconciling with Democrats. A good start would be meeting with the speaker of the House for the first time in months.

The presumptive Democratic nominee, Joe Biden, has not put forward policies that could attract Republican support. In fact, the current $3 trillion relief bill passed by the House has NO chance of becoming law. Unless Biden is so inclined to cross the aisle as president, coronavirus may have the long-lasting effect of making these partisan divides irreversible.

Harlan Ullman is a senior adviser at the Atlantic Council. His last book was “Anatomy of Failure: Why America Loses Every War It Starts.”

A war will not beat coronavirus

What are the strategy and plans today for dealing with the coronavirus? And what lessons has the United States drawn from other countries that appear to have been successful in stemming the disease?

Economic recovery from coronavirus: Lessons from 1918-1923

The United States recovered in a short time from a world war, two recessions in quick succession, a pandemic, and a period of extreme domestic unrest. As the famous John Maynard Keynes wrote, technology was central to ending depressions. And that was the case in the early 1920s, in large part driven by Henry Ford and electrification.