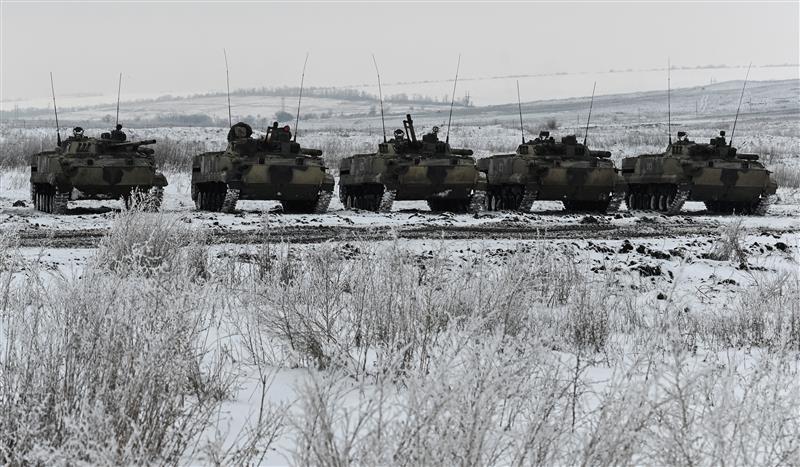 Kremlin Escalates War Threat. Russia deployed thousands of troops to Belarus, adding to a threatening military buildup that now surrounds Ukraine on three sides. US and allied officials also revealed the Kremlin plans to create a pretext for a further invasion of Ukraine with a false flag attack against Russian troops, and initiate a coup to topple Ukraine’s government. After high level negotiations with Moscow, NATO allies stood firm in rejecting Russia’s demands that NATO promise to stop future expansion and remove military personnel and equipment from Eastern Europe. The US and other allies announced increased weapons deliveries to Ukraine and troop commitments to frontline NATO states, while offering to continue negotiations to reach a practical solution.

Russian Troops to Kazakhstan. Vowing not to allow “color revolutions,” Russia sent several hundred troops to Kazakhstan to help clamp down on anti-government protests and bolster the position of the country’s authoritarian leader Kassym-Jomart Tokayev. Putin ordered the intervention under the auspices of the Collective Treaty Security Organization (CSTO), a security alliance that includes Russia and five other former Soviet states, marking the first time that its mutual defense clause has been invoked. Kazakh police forces opened fire to quell the demonstrations, leaving dozens dead and thousands injured, after which CSTO troops were withdrawn.

China Squeezes Lithuania. China intensified its coercive economic campaign against Lithuania, implementing a ban on Lithuanian imports and pressuring multinational corporations to reduce investments in Lithuania and stop sourcing supplies from that country or face additional hurdles entering the Chinese market. Beijing’s actions were in retaliation for Lithuania’s decision to allow Taiwan to open a representative office in its own name. In a show of solidarity, the EU accused Beijing of “discriminatory practices” and filed an action against China at the World Trade Organization – a move also supported by the United States.

“Now what we see is that Russia and China are becoming closer and closer… [T]hese are two authoritarian regimes that do not share our values when it comes to democracy, the rule of law, the rules-based international order… So all of us who believe in the rule of law, democracy, in the freedom of press, we need to stand together, and that makes NATO just even more important… in a time where we see authoritarian regimes stepping up.”