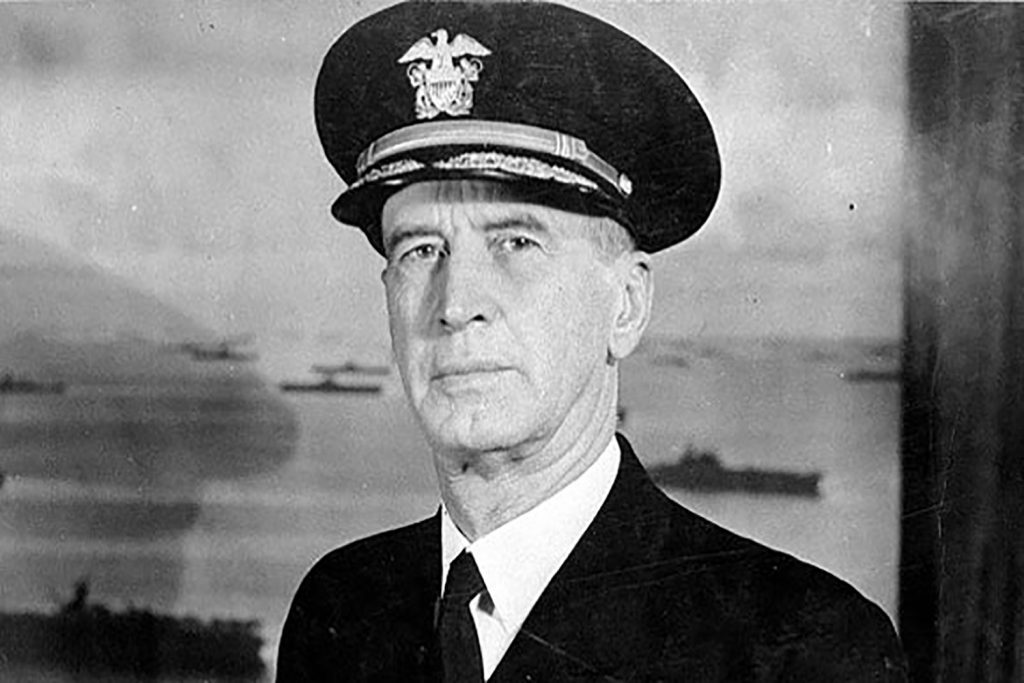 The fire on board the USS Bonhomme Richard (LHD-6) is the latest in a series of mishaps that have plagued the US Navy for a considerable time. The litany of misdeeds, disasters, and mistakes is, sadly, long. It includes the Fat Leonard scandal, in which many naval officers succumbed to all manner of bribes and gifts and lead to the disciplining of more admirals and senior officers than during World War II, the 2017 ship collisions that killed seventeen sailors, a number of high-profile acquisition failures, and an enormous backlog of ship maintenance.

Inside the service, the likely reaction is to dismiss these problems as the result of individual failures by individual ship captains, or a few bad apples who made bad choices, or whoever or whatever caused the Bonhomme Richard fire. But given the extent of these failures, a thorough examination of the Navy as an institution is long overdue.

Suppose Fleet Admiral Ernest J. King magically reappeared and was elevated to Chief of Naval Operations (CNO) tomorrow—what would he do in response to these ominous danger signs in the Navy? King was famously tough and very bright. By his own admission, he was an “SOB” who had a low tolerance for failure. Many viewed him as harsh and unjust.

A surface officer, he commanded a flotilla of submarines (without qualifying for dolphins that he would later design); oversaw the rescue attempts of the sunken submarine S-51; and earned his aviator wings as a captain. He was headed for retirement from the General Board when CNO Admiral Harold Stark resurrected him and sent him to command the Atlantic Fleet in 1940.

After Pearl Harbor, President Franklin Roosevelt appointed King CNO as Stark went to Europe to command of US Naval Forces Europe. King also took on the role of Commander-in-Chief (COMINCH) Navy, the only time any officer held both those posts. On balance, King’s wartime record was not perfect. He failed to appreciate the need for convoys given the shortage of escorts. He privately dissented with the “Europe first strategy.” Before the Battle of Midway, he doubted Nimitz’ intelligence appraisals. And he was not always a team player with the other heads of service.

Rather than using King’s wartime performance as an indicator of what he might do as CNO today, a better measure dates back to when he headed the Naval Postgraduate School—then based in Annapolis, Maryland—and served as a principal of the Knox-Pye-King Commission, named for Captain Dudley Wright Knox, Captain William S. Pye, and King himself.  The commission produced an extensive review of naval training and education in 1919. Unfortunately, as with virtually every other future review of naval education, the report was bureaucratically buried and only saw the light of day a year later when King leaked it to the Naval Institute Proceedings, where it was published in August 1920.

The report pulled no punches. It critiqued the traditional notion that time at sea and learning by doing (“OJT”) were sufficient education for naval officers. The report went back to basics as to what was required for the officer community in terms of skill sets and education at four levels— Naval Academy midshipmen to flag officers—to produce officers prepared to deal with a more complicated and demanding world. The report then made recommendations as to how to carry out those findings.

Although not in the report, King’s views about education were summarized in a lecture he gave in 1925 at the Postgraduate School: “Studying the history of war is the best preparation to hold the future peace.”1A re-reading of that commission report should be mandatory for all officers—especially flag officers—as the Navy still has not come to grips with fully integrating education into officers’ careers.

If he were to retake the Navy’s helm today, King would seek the broadest authority that could only come from the Commander-in-Chief, the President. King would strike a deal to “fix” the Navy, which could take a decade. The current president would likely think that was a good arrangement, especially if he believed King could grow the Navy to the mandated 355 ships. And like the Director of Nuclear Reactors, the CNO would have an extended term.

This would not please the Secretaries of the Navy and Defense or the Chairman of the Joint Chiefs and the regional combatant commanders. But King would not be worried. Armed with de facto COMINCH powers, King could consolidate authority in his office, and his first task, as he did in Knox-Pye-King, would be to assess the strategy, the readiness of the fleet to fight, and the people needed to man the Navy.

King would conclude that, similar to World War II, the Pacific is the key strategic theater—but with China, not Japan, the key threat. He would view Russia as an irritant to be contained rather than a serious danger for major war—its population and defense budget being fractions of NATO’s. Russia could be deterred with nuclear weapons and a trip wire naval force that could bottle up the Russian Navy in the far North Atlantic and the Baltic, Black and Barents seas, allowing a real pivot to the Pacific.

He would view presence in Afghanistan, the Middle East, and Persian Gulf as eccentric to the China problem, especially because America is now energy sufficient, and he would agree with the President’s intent to reduce US forces in those regions.

Regarding China, King would be highly influenced by the first year and a half of World War II—when the Navy took a bad beating despite winning at Midway (largely by luck, King thought) and ultimately at Guadalcanal by sheer stubbornness. King understood the vulnerability of aircraft carriers. After the Battle of Santa Cruz in October 1942, the Navy was down to one badly damaged carrier in the Pacific—the USS Enterprise (CV-6). And just as the US could not launch sustained attacks against Japan without unacceptable risk until it built up overwhelming superiority in 1944, King would apply similar logic against China today.

Hence, in the Pacific, the strategy must be to contain China’s navy to the first island chain. As the Navy and Marines “island hopped” in the Pacific to cut off Japan and establish bases for a final assault, the plan today should be to isolate and strangle China from external resources and by destroying or occupying its Belt and Road outposts along the new Silk Road.

To accomplish that, King would support the Marine Corps’ efforts to transform itself for those missions, and he would demand more submarines and autonomous units as vital offensive and stand-off weapons. Given aircraft carrier vulnerabilities to China’s current arsenal of long-range stand-off weapons, King would keep them as supporting units for operations to seize Belt-and-Road assets until China’s military could be attrited through long-range missile and electronic attack.

To exploit the latest non-kinetic technologies, King would energize Tenth Fleet as he did after creating and commanding it in World War II. Tenth Fleet’s role would be expanded from cyber to non-kinetic operations, including space, and used to disrupt potential adversaries in peace and in war. And this fleet would counter China’s electronic intrusions and Russian “active measures.”

After assessing the condition of the fleet to fight, King would conclude that the Navy is overstretched, under manned, and under resourced with too many legacy weapons systems. The recent record-setting deployments of some ships underscore the incessant demand signal for naval forces from the combatant commands.

King would not be surprised by the failure of the Navy to coordinate and integrate education while relying on the traditional view that time at sea was sufficient. He would find that the many mishaps, failures, and mistakes of the past half dozen years were deeply rooted in an institution that was long overdue for a major overhaul.

To correct these problems, King would borrow and expand on Admiral Arleigh Burke’s quote (which I heard Burke say at the keel laying of his namesake, the USS Arleigh Burke [DDG-51]), “This ship is built to fight and it better know how!” King would change “ship” to “Navy” and use that as his compass and chart for plotting the future course. He would reinstitute operational readiness inspections for all individual commands and fleets on an annual basis to determine how ready the Navy was to fight.

Tougher examinations for promotion at all levels would ensure officers and enlisted were professionally and personally qualified for greater responsibility. In his time as a submarine flotilla commander, King was well aware of the Royal Navy’s “Perisher Course” for submarine command, which started in 1919 and is still in force today. About a quarter of all its students fail and do not go on to command. King would put in place a “Perisher” course for all warfare communities.

For today’s flag officers and warfare commanders, none of whom have had significant naval combat experience, King would use taxing Fleet Problems at sea and war games ashore to test the mettle of senior officers in the most intense conditions he could create. Second chances would be rare. In this way, King could assess who was best prepared to lead strike groups and fleets into combat.

King would also revolutionize naval education with a modernized “Knox-Pye-King” Report, ensuring naval officers at all ranks were educated and trained throughout their careers for what would come next—relying less on “OJT” and getting logical payback tours for every year spent in the classroom. The Navy’s latest attempt to retool education, the “Education for Seapower” program, was a valiant effort, but like many such efforts in the past it was personality dependent and seems to have lost all momentum with the departure of former acting Secretary of the Navy Tom Modly and his education czar, John Kroger.

In dealing with defense contractors, King would ensure greater competition by demanding second and third sources and threatening to use foreign manufacturers despite huge protests from Congress. For monopsonies, such as the sole-source builder of nuclear-powered aircraft carriers, King would ensure contracts would not permit the delays, overruns, and problems the USS Gerald R. Ford (CVN-78) has suffered without severe penalties or defaults for the contractor. And if given an extended term of office, King could ensure his reforms were sustained.

Of course, today is a different time, and Ernie King won’t be coming back from the grave to fix the Navy. While it is conceivable a president could allow an Ernie King the scope of power and authority to fix the Navy and deliver 355 ships, that will not happen. What can happen is this: the current CNO, Admiral Gilday—and every flag officer in today’s Navy—can adopt King’s motto: “The Navy is built to fight, and it better know how.” And Admiral Gilday can delve deeply to find out just how well the Navy knows how to fight. That will be an interesting evaluation indeed.