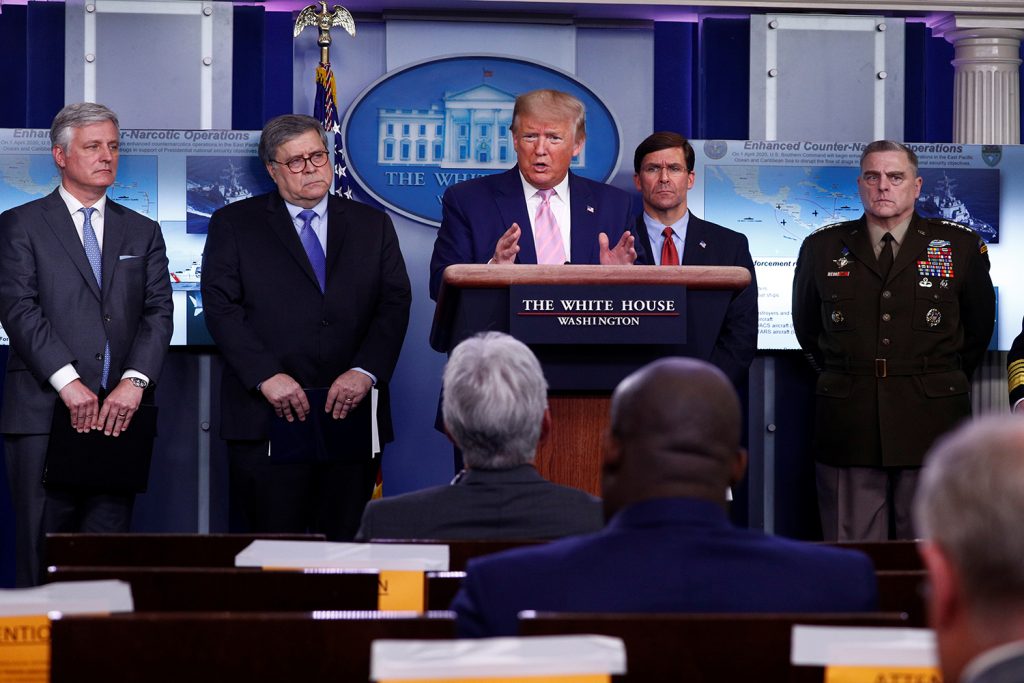 Bill Clinton campaigned and won on the slogan in 1992 “that it’s the economy, stupid.” That comment should apply to the Trump administration’s National Security Council process. Except it is not the economy—it is the process, stupid—or one might reverse that and say it is the stupidity of the process.

That President Donald Trump is on his fourth national security adviser is an ominous sign. That the interagency process seems incapable of producing a coordinated and integrated policy on most anything, given the president’s reliance on Twitter to post his decisions, likewise is not good. And the failure to have a national strategy to cope with the coronavirus and economic recovery is inexplicable and further proof of a failing process.

The most recent piece of evidence demonstrating a failing NSC process is the ongoing saga over The New York Times stories in late June claiming the GRU was offering $100,000 bounties in Afghanistan to kill American and British troops. It turns out that Russia has been re-engaged in Afghanistan for nearly a decade with the possible intent of disrupting and even sabotaging US efforts to end America’s longest war.

From a Russian perspective, US support of the mujahedin during the 1980-89 Soviet War with weapons and intelligence ultimately forced Moscow to capitulate. While that was thirty years ago, Moscow may not be inclined to be helpful to the United States, especially after the imposition of sanctions against Russia following the 2014 annexation of Crimea.

On the other hand, it is not inconceivable that Trump and Russian President Vladimir Putin may have some sort of “deal” over Afghanistan that both want to remain undisclosed. But neither the White House nor senior American military has clarified either the bounty or Russian involvement questions yet. On July 8, in a phone interview, Marine Gen. Frank McKenzie, Central Command commander, answered the question of GRU bounties, saying he was “skeptical” and that he told his intelligence officer to investigate the allegation and report back.

In a House hearing on July 9, Secretary of Defense Mark Esper and Joint Chiefs Chairman Gen. Mark Milley acknowledged having been briefed on the report. But there was confusion over Esper’s use of “payments” as opposed to “bounties” regarding what the Taliban may have received.

Milley’s revelations raise profound questions. Is there a basis for the bounty story or not, and why has the Pentagon not been more expeditious in determining an answer? Beyond the bounties, what is the full extent of Russian engagement in Afghanistan and how is that affecting the United States and its partners?

Had the NSC process been working properly, once the report of possible bounties was included in the President’s Daily Intelligence Brief in late February, alarm bells should have triggered some action if only to pre-empt possible leaks. Once the story broke four months later, an immediate and credible response was essential to defuse the negative reaction. Now that it appears the Russian presence in Afghanistan may be significant, the White House can no longer afford to defer confronting what may be an explosive story.

Meanwhile, many still wonder about the validity of the intelligence and, more importantly, why after several weeks confusion about its authenticity persists, fueling further speculation about presidential ignorance or inaction. With the intense cynicism that pervades politics today, some will conclude that White House officials were afraid to confront the president with bad news about Russia. And did the Pentagon leadership regard this as a White House matter, choosing not to intervene possibly for similar reasons?

Determining if the GRU did offer bounties or if Russia was out to stymie US efforts in Afghanistan is imperative. Or, is there another explanation as to the nature of the president’s relationship with Putin and why the administration seems reluctant to address this issue. In an election year, the perception of a president not taking every action to protect American troops in harm’s way could be politically fatal.

If the generals are correct and these reports are exaggerated, why has this not come out sooner and will any lessons be learned? Or will it be business as usual? And perhaps the famous PDB should be terminated, since few of importance, namely the president, seem to read it.

But, put another way, it ain’t the PDB that’s broken. It is the NSC process, stupid.