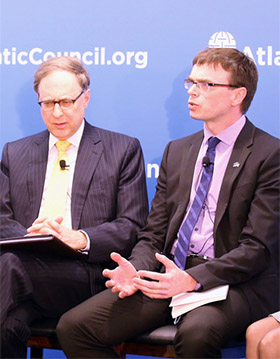 Eastern European Defense Ministers on NATO and the Crisis With Russia

Barry Pavel, director of the council’s Brent Scowcroft Center on International Security, moderated the discussion, asking whether the West is focusing  on tactics and just reacting to Russian actions, or whether it might strategically use the crisis as an opportunity to build European security in new ways. Pavel asked the panelists to address what NATO should do in Europe’s south and east, and how the West should respond to Ukraine’s needs.


Estonian Defense Minister Sven Mikser responded that the transatlantic vision of a Europe whole and free is being challenged by what he described as the expansionist, imperialist regime of Russian President Vladimir Putin. Moscow’s envisions a Europe divided so that Putin can dominate neighbors that the Kremlin sees as falling within its sphere of privileged interest. Mikser said Putin believes he can use quick military strikes to force the international community to focus its responses on de-escalation of the conflicts, rather than reversing Russia’s territorial gains.

NATO needs to improve its early warning system to deal with the speed of such threats, Mikser said. NATO members should re-direct military surveillance systems back toward Russia and should more closely monitor developments such as Russian troop movements.

The West is stronger than Russia militarily, economically, and morally, but deterrence needs to be more visible and credible, Mikser said. He expressed hope that long-term measures to strengthen deterrence will be agreed at the September NATO summit conference in Wales .

Czech Defense Minister Martin Stropnicky said that NATO Secretary General Anders Fogh Rasmussen’s visit to Prague helped his government win public support for the Czech defense budget. He thinks that gradually all NATO members have to push defense spending upwards. This is difficult because in Europe, citizens take peace for granted, even though Putin has said repeatedly and for years that he wants to restore a bigger Russia.

Western sanctions on Russia should be increased, Stropnicky said, noting that, even to Putin, they seem ridiculous. The West should have responded earlier, more than ten years ago, to Putin’s expressed ambitions to expand Russian power, he said.

Georgian Defense Minister Irakli Alasania stressed the need for the United States and Europe to act together. He also called for progress in Georgia’s membership action plan, preferably in time for the September NATO summit. Nations seeking to join NATO need validation from the alliance that they are on the right track and taking the correct steps, he said. Alasania said that one way the West can be more proactive and less reactive to Russia’s actions is through enlargement. The addition of NATO members is a positive and political measure to change the reality on the ground.

The sanctions on Russia are short-term measures that may not outlast the current crisis and the headlines it generates, Alasania said. In three to six months, relations will return to business as usual with Russia. Alasania also called for NATO to strengthen deterrence effortrs, especially military exercises, with partners and not just members.

Montenegro’s Defense Minister Milica Pejanović Đurišić said solidarity is the basis for NATO’s years of success.  The process of joining NATO has helped aspirant countries make valuable reforms, she said. She sees NATO performing a stabilizing role in the Balkans. Nevertheless, Đurišić declared that it is important to finish stabilizing Europe’s south, which otherwise may again experience serious problems.

NATO Deputy Secretary General Alexander Vershbow said that Putin’s aggression is a challenge both to the policies and principles of NATO and the West. According to him, Putin is trying to rewrite history; ignore the years of NATO-Russia partnership and cooperation, instead blaming NATO and its enlargement for Russia’s invasion of Ukraine. Vershbow made it clear that Putin has rejected a cooperative relationship with NATO. Under Putin, Russia sees NATO as its main enemy, not as a partner.

Vershbow urged an upgrading  of the NATO Response Force to respond more quickly – within days, not weeks – to threats. The Russia-Ukraine crisis has made clear that NATO needs more deployable forces. Vershbow also argued that the transatlantic community cannot continue the “institutional dysfunction” between NATO and the EU.