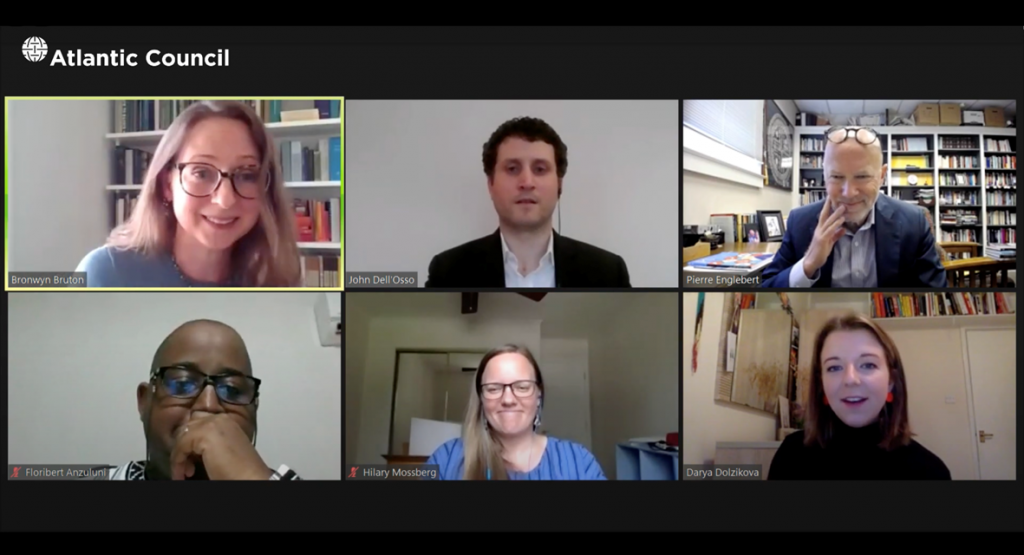 Dell’Osso opened with a brief introduction of the report, outlining the specific findings and broader implications. He noted that North Korean businessmen set up a company in the Democratic Republic of Congo (DRC), opened a US dollar banking account, and won public contracts, in apparent violation of US, European Union, and United Nations sanctions. While this principally implicates the DRC banking sector and the country’s institutional environment, Dell’Osso underscored that the insights from the report are relevant to a more general set of issues related to sanctions evasion, enforcement, and due diligence.

Following Dell’Osso’s overview, the expert panel aimed to contextualize the report’s findings. Dolzikova helpfully provided the viewing audience with an introduction to proliferation finance, explaining how analysts look to connect North Korean business activity to government proliferation efforts. In Africa, most of these efforts relate to revenue generation and given the evidence from the report, according to Dolzikova, it is exceedingly likely that the businessmen implicated were supporting North Korean government objectives.

Englebert added remarks on the political context in the DRC, in what he described as a corrupt institutional environment in which stakeholders rely on securing patronage in order to achieve their objectives. This applies to provincial governors, as well, helping to explain the statue-building activities implicated in the report as potential means to curry favor from Kinshasa. In this constrained political environment, Englebert highlighted that “following UN Sanctions is really a mild priority” when compared to political and financial survival.

For former banker and citizen activist Anzuluni, the report’s findings are unfortunately not surprising and reflect systemic issues of bad governance and corruption. He placed significant onus on the Congolese central bank in matters of financial regulation and suggested that it is a responsibility of civil society to ensure that the recommendations of this report and others are not only heard but acted on. In this way, he closed, the interests of Congolese citizens can be put first.

Missed the event? Watch the webcast, below, and engage us @ACAfricaCenter with any questions, comments, or feedback.

Overall, while there has clearly not been any regime transition in Congo, there are faint stirrings of change. It is long shot, but it seems that the Western strategy of embracing Tshisekedi in exchange for Kabila’s removal from office may yet – possibly, hopefully – bear some fruit.

Innovating around infrastructure: An interview with Africa50 CEO Alain Ebobissé

Watch Africa Center Senior Fellow Aubrey Hruby’s interview with Mr. Alain Ebobissé, CEO of the Africa50 infrastructure fund, on the role of infrastructure investment in post-COVID recovery, Africa50’s own efforts to support African markets during this period, and reasons for optimism in light of African digitization efforts.