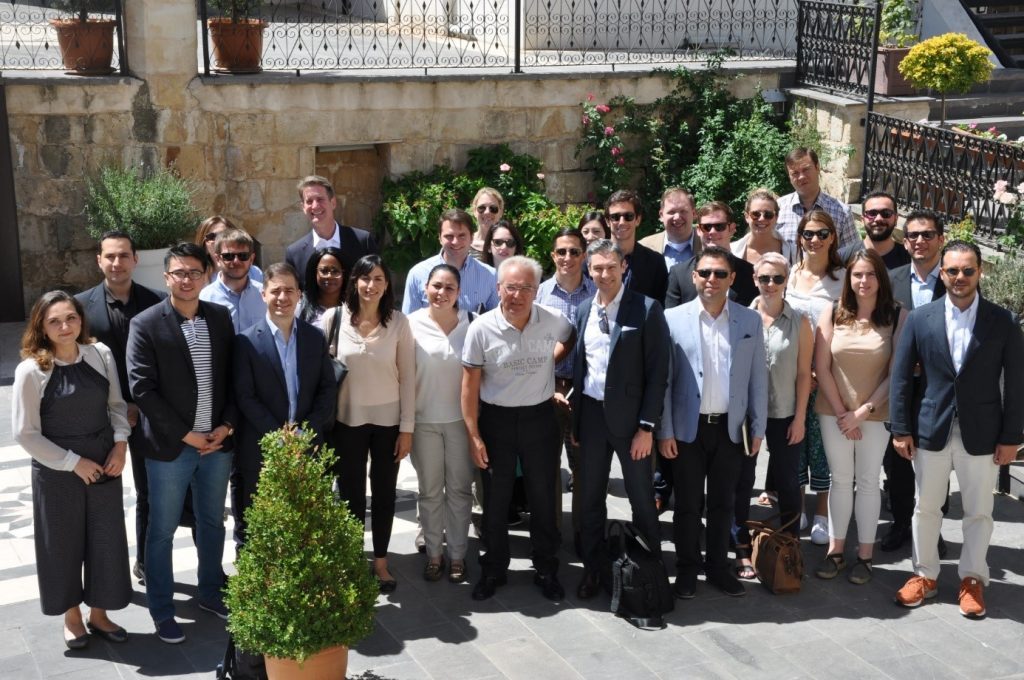 In Turkey and Greece, the presence of over four million asylum seekers, displaced persons, and unaccompanied minors, combined with preexisting stressors ranging from security on Turkey’s border with Syria to the historic economic and employment crisis in Greece, have produced one of the most significant humanitarian crises in since World War II. The Atlantic Council’s study tour aims to showcase the efforts made by Turkey and Greece to address the crisis and examine its connections to international security and cooperation.

In the context of the fourth Millennium Fellowship Program, the Atlantic Council brought twenty-one fellows from around the world to Turkey and Greece to follow the path of refugees fleeing Syria via Turkey on their way to Europe. Atlantic Council in Turkey facilitated the Turkey leg of the tour. The trip was organized in partnership and with support from the Turkish Heritage Organization and Turkish Airlines.

Today, Turkey stands as the world’s largest refugee hosting country, with some 3.57 million Syrians, and some 300 thousand non-Syrian refugees, mainly from Afghanistan and Iraq. The majority of refugees in Turkey are concentrated in provinces located in the South Eastern Anatolian region of the country. Gaziantep, near the Syrian border, ranks among the top five cities hosting the largest number of refugees. The fellows began their visit to Turkey in Gaziantep where they held meetings with the Turkish Foreign Ministry’s representative in Gaziantep, the Mayor of Gaziantep, Turkish Red Crescent, the largest humanitarian organization in Turkey and part of the International Red Cross and Red Crescent Movement, and the International Organization for Migration and visited the Nizip II Container city which hosts 4000 container-homes, a school, medical clinic, supermarket, social-psychological activities center, playgrounds, a library, a hair salon and a craft workshop for women.

It is worth mentioning that only a small portion of refugees in Turkey, around 200 thousand, live in government-run Temporary Accommodation Centers, while the rest are self-settled refugees living in urban and rural areas.

From Gaziantep, fellows travelled to the town of Çeşme on Turkey’s Western coast, one of the primary departure points for migrants seeking to enter Europe by sea as they crossing the Aegean Sea by boat to the Greek island of Lesvos – the primary assembly point for refugees seeking asylum in Europe.

In Çeşme, the fellows spent half a day with the Turkish Coast Guard Commander on the Corvette Umut. Due to the Turkish Coast Guard Command’s remarkable efforts, Turkey has succeeded in closing the Aegean Sea route—the number of migrants illegally crossing the Aegean from Turkey to Greece dropped from an average of 10,000 per day in 2015 to below one hundred in 2018. In addition to a decrease in fatalities from failed crossing attempts, the smuggling networks have been largely dismantled.

During their visit to Turkey, the MLP fellows had the opportunity to learn more about Turkey’s spectacular job in hosting over 3.5 million Syrian refugees within its borders and acquired a better understanding of the life of refugees in Turkey. They learned about the Government of Turkey’s (GoT) reponse to the crisis. The GoT has invested significant funds to respond to refugee needs, providing extensive support in humanitarian and social assistance, education, health and other services to refugees.