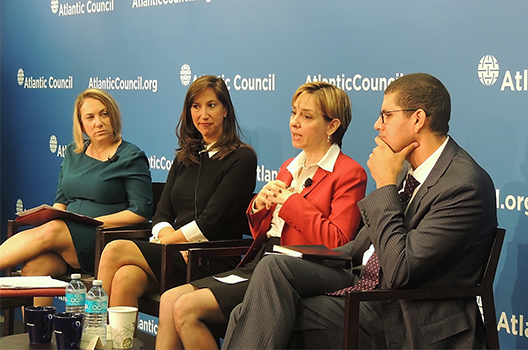 On Thursday, October 27, 2016, the Brent Scowcroft Center on International Security hosted Sweden’s State Secretary for Foreign Affairs Annika Söder for a conference on US-European cooperation in the Middle East. Söder delivered keynote remarks, in which she emphasized that the Middle East is undergoing a period of rapid transition and instability, threatened by a lack of inclusion, hope, equality, rule of law, and economic diversification. Following recent travel in the Middle East, Söder observed challenges and bright spots across the region: Jordan is struggling to cope with a massive influx of refugees, but countries like Tunisia recognize and promote the value of gender equality from economic, social, and political standpoints. She also highlighted Sweden’s important engagement in the Middle East as part of a broader narrative on the value of hope for struggling communities, and anticipated that Sweden’s new role on the United Nations Security Council will allow for more cooperation with the United States toward this goal.

Dunne described a systemic problem in Middle Eastern societies in which instability is fueled by economic and political systems that too often fail to adopt policies that are for the benefit of their citizens. She emphasized the need for engagement with civil society actors to make productive changes, as many Middle Eastern governments are unequipped to address the major problems facing the region, and the West has historically failed to implement constructive solutions outside of security assistance.

Alexander explained that USAID has always understood the root causes of conflict in the Middle East to be political. From her perspective, large populations of young people who perceive that their government is unjust are the most likely to become radicalized. Echoing Dunne, Alexander argued that civil society inclusion could alleviate the sense of political and economic alienation while pushing for better governance structures. She cited examples of USAID-supported projects that focused on stabilization as well as humanitarian and economic needs as being more likely to succeed than any single-front approach.

In his remarks, Younis referred to the results of Gallup’s extensive polling in the Middle East to explain why young people feel disillusioned with government. He pointed out that modern governments in many parts of the Middle East struggle to meet the expectations of their populations. Using a model based on future prospects rather than current economic situations, he believes that Gallup has been able to find a stronger explanation for why states like Tunisia have had such high rates of recruitment for the Islamic State (ISIS). By Younis’ estimation, most Middle Eastern populations don’t want more “big idea” solutions from the American government. Instead, they want increased trade and dialogue with Americans and business environments which encourage entrepreneurship.

The second panel, moderated by the executive director of the Atlantic Council’s Middle East Strategy Task Force, Stephen Grand, sought a strategy for future US-European cooperation in the Middle East. The discussion featured Ambassador Anne Patterson, assistant secretary for the US Department of State’s Bureau of Near Eastern Affairs, Colonel Paul D. Hughes (ret.), Interim Operations Chief for the Middle East and Africa at the United States Institute of Peace; Henri Barkey, director of the Middle East Program at the Woodrow Wilson International Center for Scholars; and Helena Boguslawska, deputy head of the European Delegation to the United States’ Political, Security, and Development Section.

Ambassador Patterson predicted that the security situation in the Middle East is likely to get worse before it improves. She cited the need to fight ISIS in places like Libya and Iraq while also shoring up the progress made in countries that are not currently immersed in violence but appear unstable. These countries in particular demand increased investment in education and skills development to prevent them from further volatility.

Boguslawska acknowledged that the US-European community could do more post-conflict reconstruction on the ground in Syria. However, she stressed the value of economic engagement with the countries of the Middle East that have also been hit hard by the refugee crisis like Jordan and Lebanon.

Hughes pointed to state failure as the leading enabler of criminal and terrorist organization growth across the Middle East. He cited the need for further focus on protecting civilians and aid workers in conflict zones while building more long-term structures to prevent mass unemployment and political disenfranchisement.

Barkey’s recommendation centered around the need for new political approaches. He suggested that further cooperation between the United States and Europe would open the door for a multi-lateral solution with Russia on the issue of Syria. He disagreed with the other panelists about the feasibility of a massive aid plan across the Middle East, instead suggesting that the West focus on rebuilding failed states.

Image: CNN Global Affairs Correspondent Elise Labott hosted a panel on the drivers of conflict in the Middle East featuring Paige Alexander, assistant administrator at the US Agency for International Development’s (USAID) Bureau for the Middle East; Michele Dunne, director and senior associate of the Carnegie Endowment for International Peace’s Middle East Program; and Mohamad Younis, a senior analyst at Gallup World Poll.