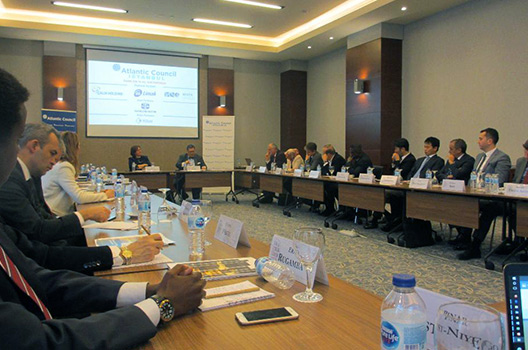 A high-level Turkish government and business delegation headed by President Recep Tayyip Erdoğan recently returned from Africa after visiting Algeria, Mauritania, Senegal and Mali. This trip is the continuation of a series of visits and initiatives undertaken by Turkey as part of its official policy of “Opening to Africa” which began in 2005. As Turkey’s business interest in the continent has grown over the past decade, the Atlantic Council Turkey office hosted Dr. J. Peter Pham, Vice President for Research and Regional Initiatives and Director of the Africa Center at the Atlantic Council, for a roundtable discussion on March 19, 2018 on the opportunities and challenges presented by selected African countries in 2018 for investors as well as rules for success in this dynamic continent which presents extraordinary potential for growth but also extraordinary challenges.

The Turkish President’s most recent trip followed his frequent visits to the continent over the past years. Since 2015, Erdogan has visited Ethiopia, Djibouti, Somalia, Kenya, Uganda, Tanzania, Mozambique, Madagascar, Sudan, Chad and Tunisia and since first becoming Prime Minister in 2003, Erdogan has visited a total of 23 countries 39 times. Turkey’s policy choice of engaging with Africa has resulted in the increase of the Turkey’s bilateral trade volume with the continent three-fold since 2003 to reach $18.8 billion in 2017. Trade volume with Sub-Saharan Africa stood at $6 billion in 2015 and total Turkish investment in Africa is estimated to have surpassed $6 billion. Currently, Ankara has diplomatic representation in 41 countries on the continent, an increase of 12 missions since 2009, while state-controlled Turkish Airlines now flies to 51 destinations in 33 African countries.

Turkey’s use of soft power instruments such as humanitarian and development aid programs also supports its aim of increasing economic and strategic relations with African countries. In 2015, Turkey’s development assistance to Sub-Saharan Africa was $395.77 million and the Turkish Red Crescent, part of the International Red Cross and Red Crescent Movement, launched a nationwide donation campaign in early 2017 in Turkey to assist drought-ridden East African countries.

The importance given to support education in African countries is also very critical in the fight against the Gülenist Terror Group (FETÖ) which controls many schools in the continent. The Turkish Ministry of National Education hosted the first Turkey-Africa Education Ministers Conference in Istanbul on 19-21 October 2017 in cooperation with the Maarif Foundation. Turkey has provided undergraduate, graduate and doctorate scholarships to more than 8,000 African students since 1992.

Last year, Turkey also opened its first military base in Africa in Somalia to help the country ensure its security and provide training for the Somali National Army.

However, Turkey’s primary motivation for stronger relations with African countries is economic. Africa has natural resources that Turkey needs for its manufacturing and industrial sectors, including oil and gas, and Africa needs income, infrastructure and jobs. Therefore, in order inform Turkish business circles interested in Africa as well as a group of academics and diplomats representing different African countries in Turkey, Dr. J. Peter Pham gave a talk on March 19 in Istanbul entitled “Africa in 2018 and Beyond: Challenges and Opportunities”. In her introductory remarks, Atlantic Council Turkey Representative Director Defne Arslan emphasized the importance of close Turkey-Africa ties and the opportunity presented by potential US-Turkish partnerships for investment in Africa.

Referring to the World Bank’s Global Economic Prospects report (WB) released in January, Dr. Pham focused in his talk on investment and business opportunities presented by six African countries ranked among the ten fastest growing economies in the world: Ghana, number one in the world and in Africa, Ethiopia, Côte d’Ivoire, Djibouti, Senegal and Tanzania. According to the WB’s figures, Africa is expected to grow by about 3.2% in 2018 and 3.5% in 2019. Reminding that this number also includes a number of resource-rich countries which have been depressed by commodity prices, Dr. Pham underlined that in non-commodity rich African countries the median growth rate is much higher.

Ghana’s expected 8,3% economic growth (8,9% according to the African Development Bank) is mostly due to the macroeconomic stabilization: the current government’s serious fiscal consolidation, as well as bringing expenditures under control. The fact that two major oil fields have come under production in the last 18 months, adding to an economy which was previously dependent primarily on agriculture resources (such as cocoa production), also played in these growth figures.

Ethiopia with an estimated 8,2% growth (IMF 8,5%) is the largest East African economy having last year surpassed Kenya with long term positive trends. Ethiopia’s GDP has more than quadrupled since 2006 when it totaled around $15.5 billion. Development rends are also strong in the country.

The opportunity the country is presenting is also about human capital: in 2006, 77% of school-aged children were enrolled in education while in 2016, that number increased to 92.6%. Regarding the higher education, the country has gone from having three universities a decade ago to close to 50 universities today. The country ranks as one of the highest in terms of the percentage of the budget devoted to education in the world.

In energy, Ethiopia has an estimated potential of 50,000 MW of clean hydro power. The country is nearing completion on one of the largest hydro projects in Africa and the world, the Grand Ethiopian Renaissance Dam, which will generate 6,550 MW of power.

Côte d’Ivoire is expected to grow 7,2% this year (7,9% according to the African Development Bank) despite the fact that cocoa, the primary export product of the country, suffered a 30% decline in price last year. Growth has been driven mainly by the favorable macro climate created by the current administration. IT and agribusiness as well as tourism infrastructure are the leading sectors for investment.

Senegal, the 8th fastest growing economy in the world (with 6,7% of expected growth according to the WB and 6,9% according to the African Development Bank). Senegal, which owns the largest natural gas field found anywhere yet to date in Africa, has just signed an agreement with Mauritania for the joint development and sharing of offshore natural resources.

Tanzania, with 6,8% of estimated economic growth presents important opportunities although this growth rate is lower than previously expected.

Dr. Pham explained the reasons for this growth and the opportunity presented by macro trends with the following factors: rich natural resources (up to 40% of the new oil, hydrocarbon discoveries over the last decade; 95% of the platinum mineral groups; 90% of the chromite-ore; 50% of the bauxite and more than half of the world’s unexploited agricultural arable land); important population (by 2050, Africa will have the world’s youngest population with a total of over 2 billion people); fast urbanization (from around 40% urbanization today to over 50% by 2020, while between 60-65% of the continent will be urbanized by 2050) and rapid rate of technological adaption (the increase in the number of mobile telephone networks and users in Africa is a good example: from no networks and 50,000 users in Sub-Saharan Africa in 2000 to one billion users with a number of countries close to a 100% mobile telephone penetration rate today).

While emphasizing the tremendous opportunity presented by African countries, Dr. Pham also shared some of the political risks to watch in 2018 in Africa as well as ways to mitigate these risks.

Regarding Ethiopia, Dr. Pham underlined the ongoing political transition. Large protests over the past year culminating in February with the Prime Minister’s announcement of a release of political prisoners and his subsequent resignation have been described by some as instability. However, Dr. Pham also reminded that this is the first time ever in the 3000-year history of the Ethiopian state that any  leader has voluntarily resigned in  a peaceful transition of power.

Another challenge is the ongoing transition or lack thereof in the Democratic Republic of Congo (DROC). Rich in both mineral and hydrocarbon resources, the country has a very strong economic potential but has seen its development held back due to political uncertainty. The constitutional term of the current president expired at the end of December 2016 and he still remains in office. On the human level, the country has generated more internally displaced people and refugees in the last two years than any other country in the world including Syria. The conservative estimate from the UN is that there are 4.5 million people internally displaced in the DROC.

The 3rd area of challenge on the continent in 2018 is the Sahel. Mauritania, Mali, Niger, Chad, Burkina Faso are facing challenges by violent extremism and terrorists such as DAESH, as well as Al-Qaida elements.

Another country presenting a challenge in the continent is South Africa. The replacement of the President Jacob Zuma and the recent announcement that he will be prosecuted for allegations of corruption that date back to 1990, as well as the ongoing struggles both within the ruling African National Congress and with the political opposition, present important challenges. Although South Africa remains the 2nd largest economy in Africa after Nigeria, after more than 20 years of the arrival of democratic rule, the economic potential of the country has yet to be fulfilled. There are also problems related to unemployment and education.

The last challenge Dr. Pham referred to is the ongoing tragedy in South Sudan. The country, born in 2011 with extraordinary promise, has been mired in conflicts since 2013. 2.2 million out of its population of roughly 10 million are refugees today while another 2 million are internally displaced. This presents a challenge not only for the country but also for its neighbors and the region in general.

Dr. Pham concluded his remarks by listing his five rules for success in navigating this dynamic and challenging continent.