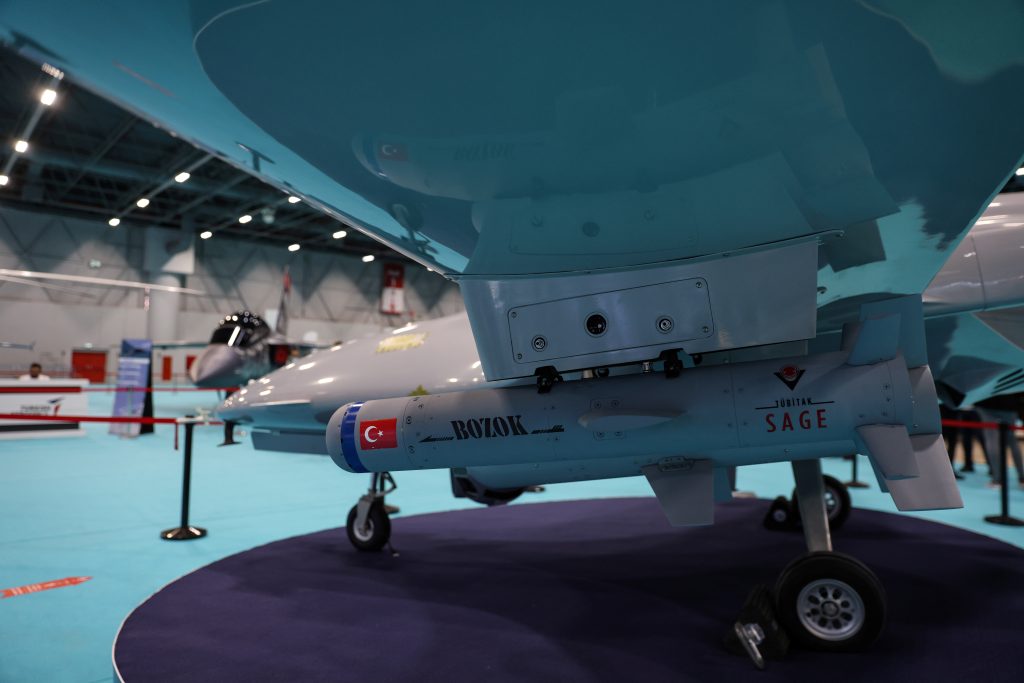 Turkey, over the last few years, has built a robust defense sector that has enabled more freedom of space for the Turkish Armed Forces in pursuing Ankara’s policies. Additionally, it has expanded exports that have grown the country’s geopolitical outreach and defense diplomacy capacity.

In the 2000s, the Turkish government registered a visible leap in its defense modernization efforts. By 2004, marking a milestone, Turkey’s Executive Committee of Defense Industriescanceled several acquisition projects worth US$11 billion in total. The main idea was encouraging more national industrial involvement in conventional war-fighting assets. Since then, Turkish military-industrial capacity has been on a steady and reliable growth route.

Moreover, drone sales have helped the country improve ties with Turkic states such as Kazakhstan, Kyrgyzstan, Turkmenistan, and Azerbaijan, and even establish new ties with various other countries such as Poland, Saudi Arabia, and Tunisia.

Overall, Turkish industries can now design, produce, modernize, and export—at varying levels of domestic contribution—some core conventional arms and equipment such as corvettes, fire support systems, unmanned aircraft systems, gliding munitions for drones, joint-direct attack munitions, across-the-spectrum land warfare platforms (except for main battle tanks), grenade launchers, and tactical anti-material rifles. On the other hand, the defense sector demands international cooperation, marking the limits of independence, at least at the time being, on strategic weapons and high-end arms, such as exo-atmospheric ballistic missile defense, fifth-generation tactical military aviation, air-independent propulsion submarines, and space-based assets. The country’s sensor and radar infrastructure is deeply integrated into NATO architecture and connected through a web of data links to the transatlantic network. Turkish defense modernization plans cannot quickly alter this critical sensor architecture given Turkey’s current shortfalls in high-tech command-control nodes, algorithmic warfare capacity, and battle networks. In these areas, Turkish military capacity will keep relying on NATO capabilities for the foreseeable future. When it comes to drone warfare, however, Turkish unmanned systems proliferation is a pioneering force for the rest of the allies, especially in the eastern flank.

The driving success behind the Turkish defense technological and industrial base is not merely about weapon systems proliferation, not even drone proliferation on its own. In essence, the country’s defense economics remain in good shape despite the Covid-19 pandemic’s shrinking effects.

Between 2020 and 2021, defense revenue increased by almost 15 percent, while the revenue coming from foreign contracts went up by 42 percent. Some figures optimistically suggest that this number might be as high as 48 percent. As for certain actors, first and foremost Baykar, foreign contracts constitute more than 90 percent of the revenue, marking an impressive outlook.

Most importantly, the volume of research and development activities, the main force that drives the technological edge of the defense industry, recently increased by 30 percent. Furthermore, in 2021, the industry employed over seventy-five thousand people. In other words, the Turkish defense technology generation has a sharp and reliable base. Therefore, despite the negative effects of the pandemic, the industry recovered quickly and revenue climbed back to pre-pandemic levels. Most of the growth in the country’s defense industry came from land platforms (with revenue of $2.347 billion, followed by the weaponry & ammunition and missile segments. The two latter categories showed a significant increase compared with 2020. The highest number of transactions was made in the civil aviation and weaponry & ammunition segments. Since 2020, Turkey also made progress in terms of reducing its defense imports (with a reduction of 4.58 percent) while maintaining somewhat stable export levels. This was a difficult balance to strike, especially given the disruptive impact that the pandemic had on global production and supply chains. The most sensational segment, namely drone warfare assets, is fast rising too. Together, Tusaş and Baykar, the two primary drone makers, secured more than $1 billion in exports in 2021, though the former has a broader export portfolio.

Turkish drone warfare solutions are growing large in diversity and concepts of operations flexibility. Akinci of Baykar, for example, is a high-end system with a heavy combat payload capacity, including cruise missile certification. Aksungur of Tusaş, on the other hand, can be equipped with anti-submarine warfare and maritime patrol assets. The country is offering other solutions too, such as the anti-radiation loitering munitions of Lentatek, Kargu, and the soon-to-be-unveiled turbofan-engine loyal wingman Kizilelma, along with a rising naval unmanned surface combat fleet.

In early 2022, Turkish Presidency of Defense Industries (SSB) announced that the industry will be upscaling and catalyzing ongoing indigenous projects to shield the country from potential external sanctions.

Even more importantly, the nation’s defense industry is expanding with a growing number of stakeholders, making it a more diverse effort. The number of projects in the industry has reached 750, made by over 1,500 local defense firms. In 2022, Turkey reached a record defense export volume of over $3 billion and might come close to $4 billion by the end of the year, making the country’s export volume comparable to some European nations’ overall defense budgets. Finally, clients are diversifying. The number of customers in the defense export portfolio has reached 170 countries. The Turkish weapons market is also a lucrative one for foreign suppliers. Despite the pandemic, defense spending is steady. Open-source works reveal that in 2018, Ankara spent some $12.98 billion in defense, ranking it seventh within NATO and eighteenth in the world. In 2021, even amid the global health crisis, Turkey spent more than $15 billion on defense and military projects. Moreover, its indigenous defense industries reported a turnover of more than $10 billion.

The technological and industrial base of Turkey’s defense sector has reached a critical mass in some ways. Still, given present defense economics trends and the sophistication of technological knowledge, Turkey’s defense ecosystem will continue to rely on bilateral and multilateral collaboration. The direction of Turkey’s fifth-generation airpower, as well as long-range and high-altitude air and missile defense weapon systems, thus remains to be seen.

Can Kasapoglu is a non-resident senior fellow at Hudson Institute, and the director of the Security & Defense Research Program at Center for Economics and Foreign Policy Studies (EDAM) in Istanbul. Follow him on Twitter @ckasapoglu1.