[02:55] Which countries have the Arab Barometer been looking at?

[05:42] What are the perceptions of China around the region?

[08:03] Could these perceptions of China change?

[12:34] A significant shift of opinion in a short period of time

[17:39] Different views of China in the Gulf region

[19:30] Negative perceptions of China in Israel

[26:33] Explanation behind MENA countries with the highest and lowest support for China

[32:03] Palestinians do not support China despite aid from China

[35:28] Factors that affect a country’s positive or negative perceptions

[41:21] Links and Resources on data and research from Arab Barometer

Michael Robbins is the director and co-principal investigator of Arab Barometer. He has been a part of the project since its inception and serving as director since 2014. He has led or overseen more than 100 surveys in international contexts and is a leading expert in survey methods on ensuring data quality. His work on Arab public opinion, political Islam and political parties has been published in Comparative Political Studies, the Journal of Conflict Resolution, the Journal of Democracy and Foreign Affairs. He received the American Political Science Association Aaron Wildavsky Award for the Best Dissertation in the field of Religion and Politics.

Ordinary citizens and residents across MENA tend to have different perspectives on China’s image in the region. Some are positive, while others are negative, and the general public’s perception is often different than that of the elites. To attempt to capture such varying perspectives, we discuss the general public’s opinion on China on a larger scale while employing the proper scientific techniques. The findings on the general public’s opinion on China come from nine nationally representative public opinion surveys conducted in MENA by Arab Barometer from 2021-2022 – including nearly 23,00 interviews.

In this podcast’s episode, we are joined by Michael Robbins, Director and Co-Principal Investigator of Arab Barometer, to discuss the region’s perception of China based on the Arab Barometer’s surveys, and the different perspectives of the general public versus the elite—as the latter tends to be more favorable toward Beijing. Arab Barometer is a nonpartisan research network that provides insight into the social, political, and economic attitudes and values of ordinary citizens across the Arab world. In the show, Michael also explains the Arab Barometer, its purpose, and how they conduct surveys and collect data.

The findings mentioned in this episode are primarily based on the Arab Barometer’s report, Public Views of the U.S.-China Competition in MENA, by Michael Robbins, Director and Co-Principal Investigator of Arab Barometer. The report concludes that China remains more popular than the US in MENA, but the gap may be shrinking as Beijing’s focus on economic engagement does not seem to be winning hearts and minds. China’s greater popularity may simply be due to the US unpopularity.

“We find that China remains relatively popular. We see that at least half or roughly half say that they have a positive view of China overall.” 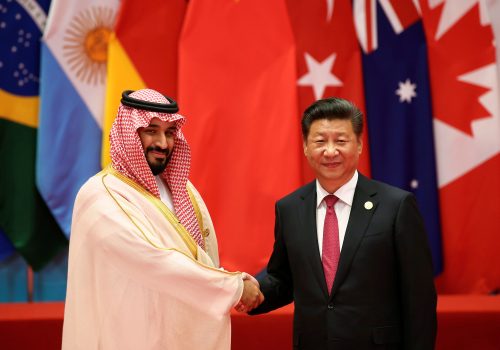 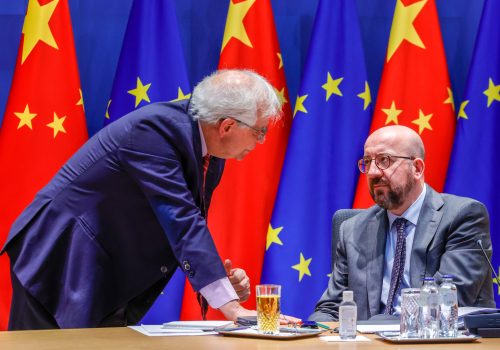 China in MENA: An EU Perspective

Camille Lons joins us to discuss how Europeans and the EU see China as a rising global player in the geopolitics of the Middle East and North Africa.

Image: FILE PHOTO: Visitors stand in front of a giant screen displaying Chinese President Xi Jinping next to a flag of the Communist Party of China, at the Military Museum of the Chinese People's Revolution in Beijing, China October 8, 2022. REUTERS/Florence Lo