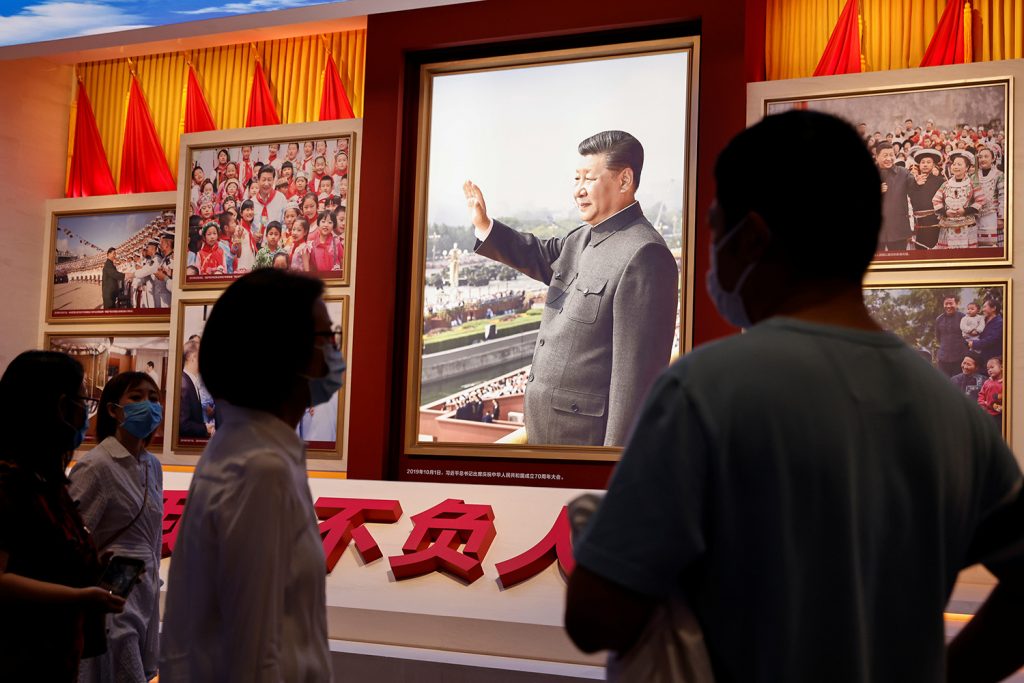 It must be said this bluntly: The Chinese Communist Party (CCP), which turns one hundred this week, represents history’s most successful authoritarians.

So, why does Chinese President Xi Jinping seem so uneasy?

It is a time when no obvious challenges to his authority are emerging, and China has never enjoyed such international reach, economic strength, or military might. Yet in a marked departure from his predecessors, Xi has been in a rush to tighten the screws on dissent, to expand technological surveillance of his people, to assert new controls over private business, and to vastly strengthen his party’s prerogatives and power.

It is this contradiction between China’s head-spinning authoritarian accomplishments and Xi’s head-scratching nervousness about the future that is most worth watching as the systemic contest of our times unfolds.

Arrayed across from each other in these global sweepstakes for the future are the ruthless, technology-empowered efficiency of autocratic capitalism and the enduring (though dangerously challenged) attractions of democratic capitalism with its magnetic charms of individual rights and freedoms.

It is the question of our times whether these two systems, as represented by China and the United States, can agree to a set of terms that allows them to peacefully compete and sometimes even cooperate. Even if they do, one system or the other will emerge ascendant as the dominant rules-setter for an evolving global order. One or the other is also likely to emerge as the more successful provider for citizens’ needs.

While the fragility of democratic societies has been on full display in recent years, most dramatically on January 6 during the riot and violent attack on the US Capitol, it may be the less transparent challenges to Xi’s ambitions that are more decisive.

This weekend’s Economist cover story lays out the contradictions.

“No other dictatorship,” it writes, “has been able to transform itself from a famine-racked disaster, as China was under Mao Zedong, into the world’s second-largest economy, whose cutting-edge technology and infrastructure put America’s creaking roads and railways to shame.”

At the same time under Xi, adds the Economist, “The bureaucracy, army and police have undergone purges of deviant and corrupt officials. Big business is being brought into line. Mr Xi has rebuilt the party at the grassroots, creating a network of neighbourhood spies and injecting cadres into private firms to watch over them. Not since Mao’s day has society been so tightly controlled.”

History suggests something has got to give if Xi continues to sharpen his repression at home and assertiveness abroad.

As Jude Blanchette writes in Foreign Affairs: “His belief that the CCP must guide the economy and that Beijing should rein in the private sector will constrain the country’s future economic growth. His demand that party cadres adhere to ideological orthodoxy and demonstrate personal loyalty to him will undermine the governance system’s flexibility and competency. His emphasis on an expansive definition of national security will steer the country in a more inward and paranoid direction. His unleashing of ‘Wolf Warrior’ nationalism will produce a more aggressive and isolated China.”

Yet recent history also shows that the CCP has demonstrated a ruthless resilience, brutal efficiency, and ideological dexterity that has confounded its critics time and again and has allowed it to navigate Mao’s Cultural Revolution from 1966 to 1976 with its estimated death toll of up to twenty million, the Tiananmen Square Massacre of 1989, the COVID-19 crisis of 2020 that China spawned and then slayed, and so much more.

Not long after he came to power, Xi abandoned the studied patience of his immediate predecessors who had acted in the spirit of Deng Xiaoping’s guiding philosophy, “hide your strength, bide your time,” in their approach to world affairs. As they did so, the CCP’s power over society also waned.

Xi’s narrow window to achieve a win for authoritarianism

Xi’s dramatic decision to change internally and externally was a result of his own conviction that the United States and Western democracies were in relative decline.

Xi’s worldview was colored by the collapse of the Soviet Union and its communist party between 1988 and 1992, a lesson that drives almost everything he does regarding his own communist party, and also by his own struggle for power.

Back in 2018, he reflected on how it was possible for the Soviet party to collapse with its twenty million members when with two million members it had defeated Adolf Hitler and the Third Reich.

“Why?” he asked. “Because its ideals and beliefs had evaporated.” He derided Mikhail Gorbachev’s policy of “so-called glasnost,” which allowed criticism of the Soviet party line. The implication was clear: There would be no such openness under Xi.

Though he’s said less about the experience of his own rise to power in 2012, when the party was facing its biggest political scandal in a generation, he could only have come away from it having learned how perilous infighting and corruption could be to holding the CCP together. His consolidation of power ultimately involved the disciplining of 1.5 million officials by 2018.

One can only understand his rush now to crush all possibility of internal dissent and seize all opportunity of international gain as the keen reading of his own political lifeline, measured against the emergence of the Biden administration with its efforts to reverse Western democratic decline and allied disarray.

Xi likely has a window of only about a decade before his country’s demographic decline, its structural economic downturn, and inevitable domestic upheavals threaten to reduce the historic possibility currently presented to him by his country’s technological advance, its geopolitical gains, and his own current hold on power.

This man in a hurry sees an inflection point to be seized, but only if he acts with a quick, decisive purposefulness and, where necessary, ruthlessness.

And under Xi, China isn’t only sprinting to seize a window of opportunity. Xi, Blanchette writes, at the same time has put China “in a race to determine if its many strengths can outstrip the pathologies that Xi himself has introduced into the system.”

In short, the test is whether authoritarianism’s most compelling success story can overcome its fundamental failings.

#1 China’s Communist Party at 100: the secret of its longevity
THE ECONOMIST

As the CCP approaches its one-hundredth anniversary this week, the Economist dedicates a special report to the extraordinary adaptability that has allowed it to not only survive but thrive as other communist governments collapsed.

“One party has ruled China for 72 years, without a mandate from voters,” the Economist writes. “That is not a world record. Lenin and his dismal heirs held power in Moscow for slightly longer, as has the Workers’ Party in North Korea. But no other dictatorship has been able to transform itself from a famine-racked disaster, as China was under Mao Zedong, into the world’s second-largest economy, whose cutting-edge technology and infrastructure put America’s creaking roads and railways to shame. China’s Communists are the world’s most successful authoritarians.”

Still, as the Economist notes, the greatest threat to Xi comes from within the party, particularly around the possibility of succession. Even the most powerful leader does not live forever, and Xi’s scrupulous refusal to name a clear successor ensures a degree of uncertainty. Read more →

Andrew Nathan writes how, despite its demonstrated adaptability, the CCP under Xi has increasingly turned to repression to ensure its control.

“Few people may believe these ideas or even understand them,” Nathan writes. “But few are foolish enough to question them. Every Chinese person who thinks about politics—which most people do not—knows how dangerous it is to challenge the regime.”

Yet even so, China’s rising middle class is “almost twice as likely to express dissatisfaction with the way the political system works (32.5% versus 17.2%) and more than twice as likely to endorse liberal-democratic values such as independence of the judiciary and separation of powers (47.4% versus 20.4%).”

This is something the CCP will have to reckon with. Read more →

University of Michigan political scientist Yuen Yuen Ang presents a sweeping analysis of the role of corruption in Chinese society and governance. She shows how the prevalence of “access money” has helped to spur large-scale growth while creating potentially fatal societal weaknesses—weaknesses that Xi aims to stamp out through top-down control.

“Once one unbundles corruption, the Chinese paradox ceases to look so baffling,” Ang writes. “Over the past four decades, corruption in China has undergone a structural evolution, moving away from thuggery and theft and toward access money. By rewarding politicians who serve capitalist interests and enriching capitalists who pay for privileges, this now dominant form of corruption has stimulated commerce, construction, and investment, all of which contribute to GDP growth. But it has also exacerbated inequality and bred systemic risks.”

Further, she argues that in Xi’s bid to end crony capitalism, “he is reviving the command system, the very approach that failed miserably under Mao.”

As a Chinese official once told Ang, “It’s like riding a bike. The tighter you grip the handles, the harder it is to balance.” Read more →

Xi, as Jude Blanchette notes, is a man in a hurry. He has thrown off the cautious approach of his predecessors and surged ahead, determined to seize what he believes is a unique opportunity to remake the international order in China’s image.

Yet as Blanchette notes, “ambition and execution are not the same thing, and Xi has now placed China on a risky trajectory, one that threatens the achievements his predecessors secured in the post-Mao era.” Xi faces the contradictions associated with his consolidation of power, and his “unleashing of ‘Wolf Warrior’ nationalism will produce a more aggressive and isolated China.”

On top of that, Xi is getting old—he will be eighty-two in 2035, and on the vaunted one-hundredth anniversary of the CCP’s victory in the Chinese Civil War, he will be ninety-five, if he is still alive. There remains a lot to be done, especially for a man who believes he is uniquely suited to do it. Read more →

Brian Deese, director of US President Joe Biden’s National Economic Council, came to the Atlantic Council this week to offer a striking vision for a potential American industrial policy, with roots in the tradition of public-private partnership.

Still, any American industrial policy worries America’s European allies who have concerns that it might be shorthand for a form of protectionism. As Deese notes, “[W]e need to work with allies and partners. This is an important point. It’s neither feasible nor advisable for us to re-shore all of our supply chains.”

That said, Deese argues, “[W]e need a new strategy, one that draws from the best lessons of our past but also leans into the challenges of the future. Our view is this strategy needs to be built on five core pillars: supply-chain resilience, targeted public investment, public procurement, climate resilience, and equity.” Read more →

The US secretary of state spoke at an Atlantic Council Front Page event in honor of Pride Month, setting out the department’s priorities on LGBTI issues.

Under a Raisi presidency, ties with Iraq will still matter

For Baghdad, it will be essential to maintain friendly relations with the new Iranian administration and its other neighbors.

Image: People look at images showing Chinese President Xi Jinping at the Museum of the Communist Party of China that was opened ahead of the 100th founding anniversary of the Party in Beijing, China on June 25, 2021. Photo via REUTERS/Thomas Peter.