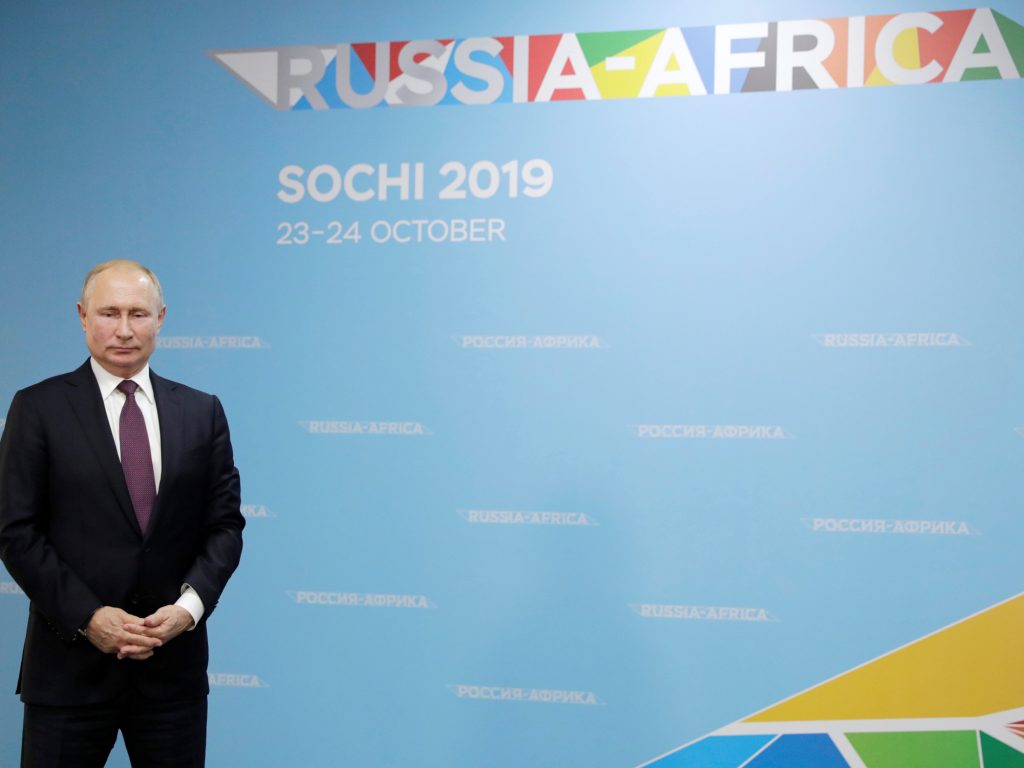 You could feel the unmistakable rumble of a geopolitical earthquake this week.

Though the tremors have long been evident, it’s growing clearer with each day that we’re experiencing a seismic shift that is threatening the political and economic world the United States did so much to create.

What’s also clear is that those countries challenging American leadership most – China most profoundly and Russia with increasing intensity – see new opportunities to accelerate their gains in the face of a polarized and distracted Washington through November 2020 elections – and beyond.

From Syria to Ukraine, and from Afghanistan to Africa, the tectonic plates are shifting in a manner that threatens not only the credibility and durability of US global leadership but also the democratic values, the Western institutions and the alliance structures that it has inspired for the past seventy years and since World War II.

You could feel the tremors in President Trump’s decision to advance the troop withdrawal from Syria and his abandonment of Kurdish allies in Syria. That was followed by Russian, Turkish, Iranian and Syrian actions to translate US decisions into their gains. Moscow emerged as the fastest rising Mideast power broker.

You could feel the quake in Russian President Vladimir Putin’s six-hour meeting with Turkish President Erdogan at Putin’s own version of Mar a Lago, his summer home in Sochi. It was there that he and this NATO ally, who recently bought the S-400 air defense system from Moscow in defiance of the West, talked about how they and other regional players would carve up control of Northeastern Syria to serve their interests.

And one could feel the aftershocks as far away as Paris, where French President Emmanuel Macron spoke with increased frustration about President Trump and NATO.

“I consider what happened in the last few days (in northern Syria) to be a serious mistake by the West and NATO in the region,” Macron said after a European Council summit in Brussels. “It weakens our credibility in finding partners on the ground who will be by our side and who think they will be protected in the long term. So that raises questions about how NATO functions.”

The geopolitical shift also was evident this week in President Putin’s hosting also in Sochi of Russia’s first-ever Africa summit, another maneuver to profit from a distracted America. He welcomed more than 40 African leaders with a focus on building defense relationships, providing fellow authoritarian leaders with the tools to maintain power and seeking trade deals particularly focused on energy and mining.

A week earlier, the earthquake’s location was the Gulf, where President Putin visited Saudi Arabia for the first time in a dozen years. The recent attack on Saudi oil fields, which prompted little response from Washington, and the increased ostracization by Congress and others of Saudi Crown Prince Mohammed Bin Salman – following the October 2018 murder of journalist Jamal Khashoggi – has left Riyadh even more open to Putin’s entreaties.

From 2014, Moscow and Riyadh have grown closer through a bilateral effort both at the top leadership level and through their ministers to work on what is known as the OPEC+ deal on reducing oil output to stabilize prices. Putin’s most recent trip produced a number of new agreements, importantly including a charter on long-term cooperation between OPEC countries and producers that are not part of the cartel that was signed by Putin and Saudi Arabia’s King Salman.

“Putin must be looking out at the world and savoring the fact that things are going his way,” said Angela Stent of Georgetown University, one of America’s leading experts on Russian affairs.

Three weeks ago, Stent attended the 15th annual gathering of the Valdai Discussion Club in Sochi, where Putin sets the agenda each year before an international audience. “The message we received,” said Stent, “was that the West is on the decline, Pax Americana is over, and at the dawn of this new era, Russia, China and India will lead a new ‘democratic’ multipolar order.”

Putin praised President Trump in his address to the group for his “brave actions” in reaching out to North Korea to avoid war, which he called a product of Trump’s “non-standard thinking.” When Stent asked Putin how Russia would deal with an increasingly unpredictable US during the 2020 election campaign and impeachment proceedings, Putin shrugged: “Life goes on, and we will work with the United States.”

Though it has been Russia that has been at the forefront of events in the past week, it is clearly China that has made the greatest and potentially most lasting global inroads. It has done so most prominently through its Belt and Road Initiative, which among other things is the most ambitious infrastructure development initiative in history.

Less noticed have been unprecedented efforts at diplomatic outreach, the newest of these reaching directly into an ongoing US initiative. This week, for example, Afghan officials said China is organizing talks among Afghanistan’s rival factions after negotiations broke down between the Taliban and the United States.

One shouldn’t exaggerate the lasting impact of any the above events – and many more could be included – on US global leadership. It’s also true that the United States continues to enjoy unique advantages that have served it well in the past and would do so again in the future – resilient institutions, a dynamic and job-creating economy and overwhelming military capabilities.

It’s also true that authoritarian systems like those of China and Russia have built in disadvantages that could undermine them over time. China faces aging demographics, slowing growth, Hong Kong protests, and authoritarian structures that may prove brittle in the face of new challenges. Russia’s structural problems are far deeper, and no one can predict the shape of a post-Putin world.

That said, it’s time to recognize the fact that a geopolitical earthquake is under way. Its consequences will grow only greater the longer we are distracted by our own domestic political ferment and fail to respond with a seriousness and strategy that is equal to the challenge.

Must-Reads from a World in Transition

This week’s top reads include an Economist look at the sources of Putin’s strength, Yaroslav Trofimov’s reflections in the Wall Street Journal on why the United States can’t escape the Middle East and the Financial Times’ look at an underestimated but troubling crisis, the increased strains between South Korea and Japan.

Also don’t miss this week’s two must-reads: Ivan Krastev and Stephen Holmes look at the reasons behind the failure of liberalism in Central and Eastern Europe and Colum Lynch and Robbie Gramer provide a rich, telling look at how China outmaneuvered the US in putting a top United Nations official in place.

The West should learn some lessons from Vladimir Putin’s success

The Economist takes a hard look at what Putin has achieved – as he makes impressive new inroads in the Mideast, Africa and Europe – and also at his remaining vulnerabilities.

“How did a country with an economy the size of Spain, corruption on a par with Papua New Guinea and life expectancy below Libya achieve all this?” the Economist asks. It concludes that military modernization played a crucial role, “but he has also been politically more astute than the West, both in swiftly seizing opportunities and sticking by his allies.”

The magazine lists Putin’s vulnerabilities, ranging from falling incomes to the cost of his military adventures. It then ladles out advice for the West: “support your allies, play to your strengths, do not buckle under pressure and do not create a vacuum that can be filled by a rival power. The West needs a muscular foreign policy to face down the world’s new strongman.” Read More →

Yaroslav Trofimov takes a smart look in the Weekend WSJ at why the United States can’t seem to extract itself from the Middle East, even as President Trump joins a long line of American leaders who have wanted to do so.

“…Subsequent attempts to pivot away from the region or ignore it altogether have contributed to humanitarian catastrophes, terrorist outrages and geopolitical setbacks,” writes Trofimov, “further eroding America’s standing in the world.” Read More →

Divided by history: why Japan-South Korea ties have soured

One of the most concerning, yet undercovered recent global developments, is the breakdown of Japanese-South Korean relations. At a time when both countries should be growing closer, given their common concerns about China and friendships with the US, their disagreements are growing – fueled as much by historic grievances as current policy differences.

FT reporters Robin Harding and Edward White conclude, “With the US all but absent from the traditional role of mediator between its fractious allies, it is hard to find any escape route” as long as the current Japanese and South Korean leaders are in office.” Read More →

How liberalism became ‘the god that failed’ in eastern Europe

This week’s must-read is Ivan Krastev and Stephen Holmes long-form analysis in the Guardian of the rise and fall of liberalism in Central and Eastern Europe.

“In the first years after 1989, liberalism was generally associated with the ideals of individual opportunity, freedom to move and to travel, unpunished dissent, access to justice and government responsiveness to public demands,” the authors note. Yet, “encouraged by hopes of joining the EU, the reformers underestimated the local impediments to liberalisation and democratisation and overestimated the feasibility of importing fully worked-out western models.”

The authors conclude that “fear of diversity and fear of change, inflamed by the utopian project of remaking whole societies along western lines, are thus important contributors to eastern and central European populism.” Read More →

#5 CHINA AT THE UNITED NATIONS

Outfoxed and Outgunned: How China Routed the U.S. in a U.N. Agency

Colum Lynch and Robbie Gramer produce a must-read narrative on how the United States got outmaneuvered by China at the United Nations in a contest to see who would be the head of the Rome-based U.N Food and Agriculture Organization.

The story, based on interviews with some two dozen officials and experts, underscores both China’s growing global sway and ability to get what it wants and the cost of the Trump administration’s “clumsy state of diplomacy.” Write the authors, “Critics charge that the president and his top diplomats are ceding influence in international organization while at the same time trying to keep China from assuming greater control of them.”   Read More →

Brexit: Another day, another crisis

In a day that has created as much uncertainty as any other in the four-year long saga of Britain’s proposed exit from the EU, Johnson actually managed to trigger not one but two constitutional crises.