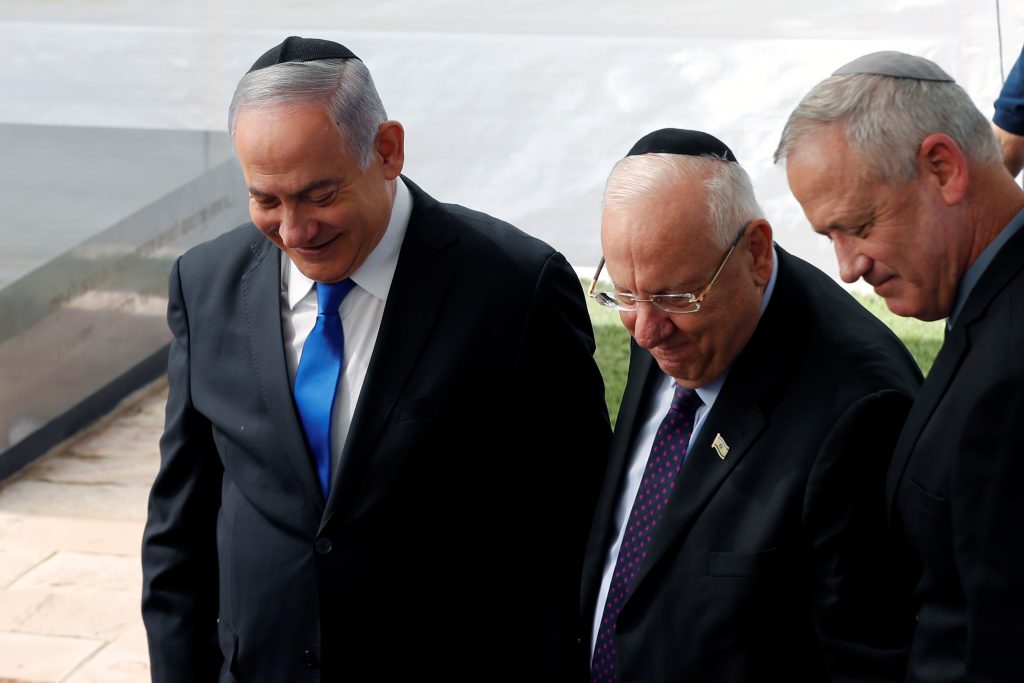 On October 21, on the occasion of his 70th birthday, Israeli Prime Minister Benjamin Netanyahu returned the presidential mandate he had been given to form a government, having failed for the second time to form a coalition. For the first time in over a decade, someone else will have the opportunity to do so.

President Reuven Rivlin is now expected to give the mantle to opposition leader Benny Gantz, who will have twenty-eight days to form a government led by his Blue and White party. The challenges he faces in doing so are formidable—and the consequences of further delays to the formation of a government in Israel could be severe.

Several potential scenarios for a government configuration have emerged. They include some version of a unity government, a minority government, handing the mandate to someone else, or ultimately third elections.  Every scenario offers several permutations—each more complicated than the next. A Gantz-led minority government, for example, could be supported by either the Joint List or Yisrael Beiteinu, but would likely only act as a caretaker government for a limited period or face challenges from the Supreme Court. Alternatively, any of the relevant players, enticed by the prospect of power and the weakening of Netanyahu—be it Gantz, Lieberman, members of the Likud, or the religious parties—could still abandon prior agreements or campaign promises they made and sit with those with whom they vowed never to serve.

Any scenario in which Gantz succeeds in forming a government—or at least a durable one—is optimistic.

Any scenario in which Gantz succeeds in forming a government—or at least a durable one—is optimistic. In some ways time is in Gantz’s favor—Netanyahu’s fate will be sealed by his corruption trial while the 28-day clock ticks. If indicted for fraud, he is likely to be further weakened by the charges. The prospect of long overdue defections from Likud could increase and his coalition partners may start looking for other options. They could either join the Gantz government—in a scenario similar to the 1984 Peres-Shamir unity government in which party members who agreed to the terms were co-opted and everyone else was out—or wait for a third election in which Netanyahu would no longer serve as Likud leader. In the less likely scenario in which the charges are reduced, Netanyahu could join a unity government with a rotating premiership in which Blue and White would now be willing to serve. Gantz would still emerge victorious having secured a unity government on his terms and would preside, at least in part, over what could be a remarkably stable government.

If Gantz fails in building a durable government over the course of the month, the process will only drag on longer. Another candidate with majority backing—an unlikely scenario Bennett and Lieberman both pine for—would enjoy yet another twenty-one days to try to form a coalition. When the clock finally runs out, Israel could be heading to a third election, and Netanyahu’s time as interim prime minister and his corresponding prospects for skirting possible imprisonment both increase. Similarly, if Gantz builds a care-taker or otherwise unstable government, the prospect of elections still run high, albeit on a longer timetable.

Third elections may have political advantages, but they are a bleak prospect for the Israeli people. They will cost the economy billions of additional shekels, could generate even lower turnout among increasingly disaffected voters, and will only further prolong government paralysis. A caretaker government—whether under the interim leadership of Bibi or Gantz—is significantly limited in the action it can take. The social, economic and political impact are considerable, as the lack of both a budget and certainty permeate all aspects of the government, from judicial appointments to education and health subsidies. Moody’s has threatened to downgrade its rating of the Israeli economy if a caretaker government doesn’t mange the deficit or pass a 2020 budget. National security is also harmed, as the military is paralyzed by indecision. Uncertain of the size or content of the budget, training, procurement and organizational planning are all stalled.

Political instability is also bad for Israel’s foreign relations. Whereas a major source of Netanyahu’s perceived strength had been his ability to court and influence international leaders, they now recognize him as not only weak, but increasingly likely to be headed out the door. US President Donald Trump has made no secret that he disdains “losers” almost as much as “haters.” When son-in-law and senior advisor to the president Jared Kushner arrives in Israel this week—where, for the first time he will meet both Bibi and Gantz—very little is likely to come out of the discussions until he knows what partner he will be working with in the long term.

As the Israeli government enters what could be a prolonged state of limbo, so too will US policy toward Israel. Unless the Trump administration believes that Netanyahu is poised for yet another resurrection—the charges are downgraded or dropped, or a unity government is formed—the timely political gifts, including recognition of the Golan Heights, moving the embassy to Jerusalem, the suggestion of a US-Israel defense pact, are all a thing of the past. Similarly, any action on the long-awaited peace initiative is unlikely to resume during this interim period, though its delay may come as a relief to all three parties.

Weakened relations also stands to impact Israel’s security. The Israeli media have widely broadcast the frustrations of the security establishment over the United States’ non-response to Iran over the September 14 Aramco attacks in Saudi Arabia. They are also deeply concerned about the consequences of the administration’s abrupt decision to leave Syria—which not only emboldens Iran but is also psychologically jarring for Israelis who see a mercurial administration turning on its allies. The prospect that Trump may, at Israel and Jordan’s behest, leave some US troops at the Syrian-Jordanian border is a helpful if potentially marginal afterthought. Israelis publicly claim to know better than to rely on outsiders when it comes to defending their interests—and the alleged Israeli bombing in Northeast Syria is telling. Given that the dismay of Trump’s own party has failed to affect the president’s decision, it’s not clear how much impact others can have now. But the uncertainty combined with Netanyahu’s weakness has clearly cost him access to a president, with whom he has not spoken since the election. It’s tough to influence a president when he isn’t speaking to you.

When Trump saw Netanyahu stumble in the last polls, he cleverly reminded the press that “our relations are with Israel.” Of course this is true. And the reality is that, when it comes to foreign policy and US-Israel relations, Gantz and Netanyahu aren’t likely to be hugely different leaders, though the composition of the future governing coalition could have a significant impact on policy. In some ways, Gantz is a blank slate—he managed to say almost nothing for the duration of his campaign—but as a former Chief of Staff of the Israel Defense Forces, he’s likely to be hawkish and eager to court US favor.  If he—or someone, anyone—doesn’t manage to take the reins of the government—sooner rather than later—the consequences for Israel will be formidable.

Carmiel Arbit is cofounder of Key Bridge Strategies and a Truman National Security Fellow. She researches and writes on US-Israel relations and has consulted for NGOs around the world, including in Israel and the Palestinian Territories.

Results were disappointing for the incumbent, Prime Minister Benjamin Netanyahu, but still inconclusive. The next phase promises to be no less tortuous.

Six nail-biting weeks after he was first tasked by Israeli President Reuven Rivlin to construct Israel’s next government, Prime Minister Benjamin Netanyahu was forced to concede defeat and admit that he had failed to cobble together a new ruling coalition.

None of this means that the horse-trading stage — during which Netanyahu’s potential partners will all compete for key postings in his administration — will go smoothly.