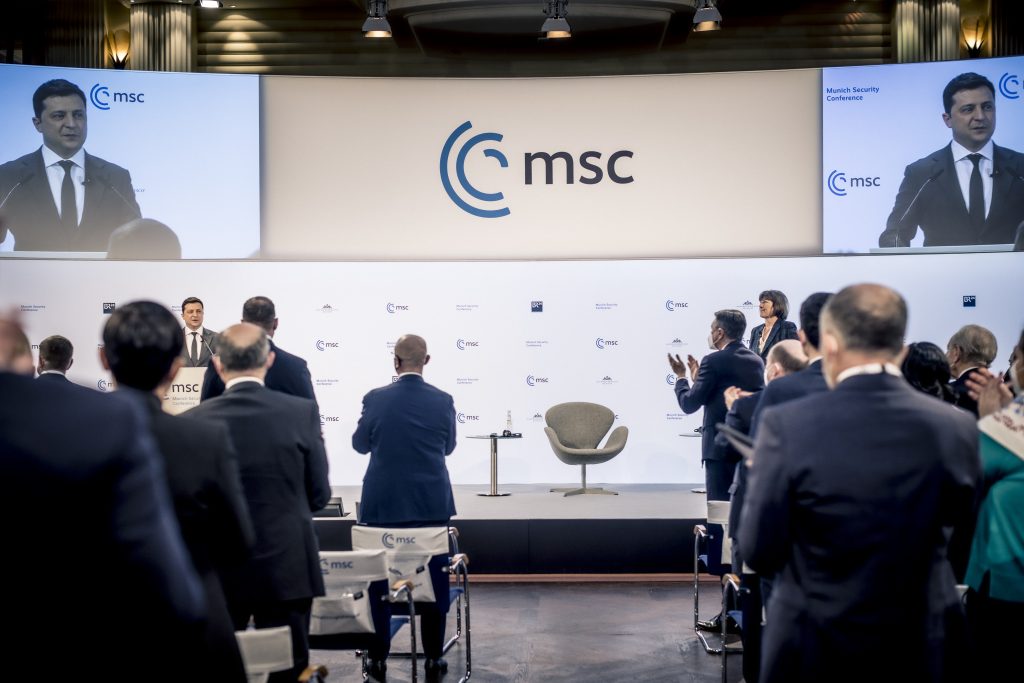 A sense of helplessness and dread hangs in the air over the Western leaders gathered here at the Munich Security Conference as the expectation grows that Russian President Vladimir Putin will unleash a military attack on Ukraine within days, if not hours.

Balanced against that is a renewed and reinvigorated sense of common cause and unity among the United States and its allies and partners, alongside an increased conviction of the historic nature of this moment. Not since the Cold War’s end have NATO allies and their partners engaged in more intensive military planning, designing of sanctions, political consultation, and intelligence sharing.

What’s uncertain is what will be more defining for Europe’s future: Putin’s determination to reverse the Cold War’s outcomes by recreating a Russian sphere of influence by force, or the momentary return to Western common cause that it has provoked. In every crisis lies opportunity, but it’s anyone’s bet how deep the crisis Putin unleashes will be, or how lasting the Western response.

US and European leaders alike have been hard-pressed to rally their publics around the dangers Putin poses to post-Cold War principles: that borders can’t be erased by force, that great powers can’t be allowed to subjugate their neighbors, and that independent countries should be free to make sovereign choices about their alliances and associations.

But in recent days the mood here has shifted to one of greater alarm because of a mounting and indisputable tide of evidence that Putin is poised to launch the biggest military action the world has seen since 1945.

One US official with access to real-time intelligence told me, “One can’t reach any other conclusion from the growing evidence we see [than] that Putin just wouldn’t go to this level of trouble, cost, and logistical gymnastics if he weren’t intending to do something very serious with it.”

The mood here is one of disbelief that such a conflict can be possible in modern Europe, after several years of focusing more on less kinetic issues such as climate change and pandemic response.

There is also a mood of resignation that all the West’s threats of political and economic sanctions—and commitment to move NATO forces forward to allied countries on the eastern front should Putin further attack Ukraine—won’t be enough to sway the Russian leader from what he considers his historic imperative.

Munich is awash with armchair psychologists, many of whom have met with Putin over the years, wondering why the preternaturally calculating Russian leader is rolling the dice now. European officials who know him best believe controlling Ukraine has become more an obsession than strategy for Putin, some twenty-two years into holding power and shortly before turning seventy. To restore what he called “Ancient Rus” in his essay on Ukraine last summer, which would cement his place in his nation’s history, regaining control of Ukraine alongside Belarus is non-negotiable.

European officials here give great credit to the Biden administration for preventing Putin from controlling the narrative by releasing intelligence, both open-source and classified, regarding Russia’s unprecedented troop buildup and plans for false-flag operations intended to prove that Ukraine was provoking Russia’s military actions. Within hours, US officials also rebutted Putin’s claims that Russian troops were withdrawing.

Speaking here, Michael Carpenter, the US ambassador to the Organization for Security and Cooperation in Europe, said Russia has now deployed between 169,000 and 190,000 military personnel near Ukraine and in Crimea—far more than US allies had known—a disturbing increase from a force of 100,000 on January 30.

Said Carpenter, “This is the most significant military mobilization in Europe since the Second World War.” How, when, and in what numbers Putin will use all these troops remains uncertain, but only a dwindling number of experts believe that he won’t use them at all.

“Every indication we have is they’re prepared to go into Ukraine, attack Ukraine,” US President Joe Biden said Thursday. “My sense is this will happen within the next several days.”

General David Petraeus, the former US Army commander and CIA director, told a lunch gathering here that what’s most revealing is Russia’s considerable deployment of “enablers” for combat that aren’t usually present for military maneuvers. “You don’t need field hospitals for exercises,” he said. “You need them for invasion.”

What’s disturbing is knowing how long the West has had to counter Putin’s revanchism, as he signaled this path fifteen years ago here in a speech that landed in the conference hall of the Bayerischer Hof hotel like a hand grenade.

Several weeks later in April 2007, Russia launched a series of cyberattacks on Estonia; it invaded Georgia in 2008; it annexed Crimea in 2014; and then it backed Russian separatists in the Donetsk and Luhansk regions of Ukraine. Along the way, Putin more brutally repressed opposition at home, while Russia was connected abroad to assassinations, poisoning, cyberattacks, election meddling, and disinformation campaigns.

With a smile toward his Munich audience in February 2007, Putin said, “This conference’s format will allow me to say what I really think about international security problems. And if my comments seem unduly polemical… then I would ask you not to get angry with me. After all, this is only a conference.”

He got to his point quickly. “One state and, of course, first and foremost the United States, has overstepped its national borders in every way. This is visible in the economic, political, cultural, and educational policies it imposes on other nations. Well, who likes this? Who is happy about this?”

The height of audacity came when he quoted former US President Franklin Delano Roosevelt on why the post-Cold War security order could not stand. “When peace has been broken anywhere, the peace of all countries everywhere is in danger,” said Putin in quoting FDR.

Now it is Putin who is breaking the peace.

There is another well-known historic association with this city and that is the Munich Agreement of September 30, 1938, when Germany, the United Kingdom, France, and Italy ceded to Hitler the German-speaking Sudetenland of Czechoslovakia. At the time, Europe celebrated the agreement as a way to prevent major war.

The lesson of Munich then, Munich of fifteen years ago, and Munich now is the same: appeasement doesn’t reduce dangers but only increases them. Putin is unlikely to back away from his Ukraine obsession. However, Ukraine, the United States, and its partners still can make his pursuit so costly that the boldest assault on the post-World War II international order yet will fail.

Frederick Kempe is president and chief executive officer of the Atlantic Council. You can follow him on Twitter: @FredKempe.

David Brooks writes about a time we shared in Europe working for the Wall Street Journal, when it seemed that all the news was good: the Berlin Wall fell, the Cold War ended without a shot, the Soviet Union peacefully imploded, Ukraine became independent, and democracy spread to Central and Eastern Europe.

“What the hell happened?” he asks. “Why were the hopes of the 1990s not realized? What is the key factor that has made the 21st century so dark, regressive and dangerous?”

His answers could provide an antidote to turn around what he calls our dark century’s reversion toward barbarism.

“Democrats are not born; they are made,” he writes. “If the 21st century is to get brighter as it goes along, we have to get a lot better at making them. We don’t only have to worry about the people tearing down democracy. We have to worry about who is building it up.”  Read more →

Michael McFaul, former US ambassador to Russia, argues that if Putin agrees to negotiate, it will present the perfect opportunity for Biden to seize the diplomatic offensive and turn a foreign crisis into an opportunity to restructure the international security framework along the lines of the Helsinki Accords with the Soviet Union nearly fifty years ago.

“After decades of division, it will be difficult—and maybe impossible—for Russia and the West to strike any security deals on Europe,” McFaul writes. “They have little faith in each other and plenty of reasons for suspicion. But given the stakes, the world must try.”

Further, McFaul warns, “as US policymakers must explain, the alternative is worse. In the absence of a new security deal, Putin will continue to stoke divisions, tensions, and conflicts both between and within countries in Europe and North America—even if he does not launch a full-scale invasion of Ukraine.”

The United States cannot fall over itself making concessions to Putin, but McFaul argues that if an opportunity for negotiations arises, the United States should seize it with both hands. Read more →

To better understand Putin’s internal calculations, read this Economist analysis on how Putin sees the potential negative consequences of war for Russia’s elite as a benefit that allows him to rule them through fear rather than mutual cooperation.

The Economist reports that those Russians speaking against the war behind closed doors include technocrats who “reduced debt to just 20% of GDP, brought down inflation, built up $620bn of reserves and constructed a ‘fortress economy’” in the face of tough sanctions since 2014. “Others are businesspeople who managed to survive and prosper despite a worsening economic climate and the predations of Mr Putin’s cronies. Many of these men and women are looking for escape routes.”

And, as a consequence, Putin has painted himself into a corner.

Putin is playing a dangerous game for everyone, himself included. Read more →

To understand the US strategy of publicly broadcasting information about Russia’s intentions, look no further than this stellar piece of reporting from the Financial Times.

“To do this sort of thing quickly and seamlessly, they would all have to agree on the strategy and be a part of it. If people did not want to do this there would obviously be sniping and moaning, and you’re not seeing that,” a former intelligence officer is quoted as saying of the strategy.

Yet the biggest problem with dealing with an authoritarian regime is highlighted by a Kremlin official, who tells the FT: “This is all in one man’s head. Only he knows when and how to escalate or tone things down. He has decided that this is the right place and time to make these demands. He worked in security for so many years—you and I can’t even imagine all the threat scenarios he sees in his head.”

In other words, it all comes down to Putin. Read more →

This brilliantly reported and chilling analysis of Vladimir Putin from the New York Times’ Anton Troianovski highlights the toll the pandemic may have taken on the Russian leader, and how that may in turn have made him more reckless and more ruthless.

“For almost two years,” Troianovski writes, “Mr. Putin has ensconced himself in a virus-free cocoon unlike that of any Western leader, with state television showing him holding most key meetings by teleconference alone in a room and keeping even his own ministers at a distance on the rare occasions that he summons them in person.”

This may in turn hint at a changed Putin.

“There’s this impression of irritation, of a lack of interest, of an unwillingness to delve into anything new,” says Ekaterina Schulmann, a political scientist and former member of Putin’s human rights council, of the Russian leader’s latest public appearances.

As bad as Putin has been, he may have changed for the worse. Read more →

Transatlantic Telegram: Whatever happens next in Ukraine, a new European security order is emerging

The view from Vilnius, Lithuania, and Washington about a crisis that is both familiar and taking us into uncharted waters.