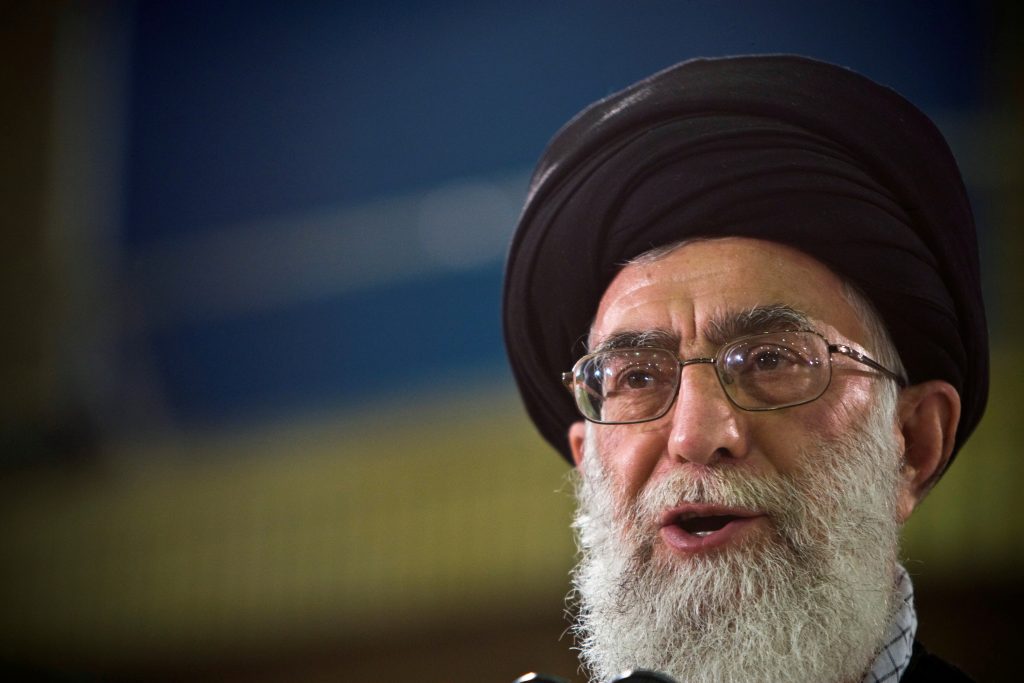 Surprising new signs are emerging that President Trump’s controversial “maximum pressure” campaign on Iran could set the table for new negotiations toward a better agreement.

To get there, however, President Trump will have to navigate the greatest perils in US-Iranian relations in recent memory, something he has done so far with a military restraint that has confounded his critics and gained him praise for “prudence” even from Iran’s foreign minister.

Since late April, when the Trump administration ended waivers for eight countries that allowed them to continue to buy Iranian oil, Tehran’s exports have nosedived to some 300,000 barrels a day from more than a million previously. Its economy has shrunk by 6%, and its currency has lost 60% of its value over the past year.

The immediate impact of that escalated US economic pressure has been the most dangerous ratcheting up of Iran’s threatening activities in memory, which one senior US official explains as Tehran “punching its way toward new talks.”

Iran has begun to breach the nuclear deal’s enrichment restrictions, it shot down an American drone, and it now has seized a British tanker. This week, Tehran announced plans to execute a ring of alleged CIA spies.

Beyond that, Iranian-backed Houthis in Yemen have been using drones and missiles provided to them by Tehran to strike Saudi targets such as airfields, pipelines and pumping stations. Iranian trained and financed Shia militias are firing rockets at US bases, and Israeli security officials have told former US official Dennis Ross that the Iranian-backed group Islamic Jihad is trying to provoke conflict with Israel in Gaza.

None of that may look much like a prelude to the return of Iran to the negotiating table, except that Iranian officials in the last few days are showing an unexpected and public willingness to talk. Past patterns have shown that Iran never likes engaging from a position of perceived weakness.

Talking to US journalists, Foreign Minister Mohammad Javad Zarif last week floated the idea of a deal that would have the US easing sanctions and Iran agreeing to a tougher nuclear protocol. Then he met with Senator Rand Paul, a self-appointed US mediator.

The New York Times’ Farnaz Fassihi also reports on what she regards as an intriguing split among Iranian hard-liners on how to deal with President Trump between those who have long ruled out any dealings, including the country’s supreme leader, Ali Khamenei, and President Mahmoud Ahmadinejad, known in Washington for his Holocaust denial and anti-American and anti-Israeli fervor, as well as other conservatives clerics and officials close to the revolutionary guards who are advocating for negotiations with the US.

“Mr. Trump is a man of action,” Mr. Ahmadinejad said. “He is a businessman and therefore he is capable of calculating cost-benefits and making a decision. We say to him, let’s calculate the long-term cost-benefit of our two nations and not be short-sighted.” He conceded the issues went far beyond the matter of the nuclear agreement and would require “a fundamental discussion.”

Given both the present perils and the emerging potential, it’s time to transform President Trump’s maximum pressure into diplomatic activity. It’s also time to provide a more common front on Iran by taming transatlantic tensions, moderating Washington’s partisan bickering and toning down Trumpian tweets so that all parties can better leverage the indisputable economic bite of sanctions into a deal that better contains Iran and avoid war.

It really doesn’t matter anymore whether you believe President Trump never should have withdrawn from President Obama’s nuclear deal with Iran in May 2018, and instead should have done more to leverage it with allies and through sanctions for a better deal. (My view.)

It also doesn’t matter whether you believe President Obama never should have entered such a significant agreement without more effort at bipartisan, Congressional approval. Or that US engagement with Iran failed to address the present danger of Iran’s use of regional proxies, support for terrorists or ballistic missile development. (Also, my view.)

That’s water under the bridge.

The question now is a larger one: What’s the best course to address the largest security challenge in the Middle East, now that the danger of an ISIS caliphate has been wrestled down. Iran’s nuclear ambitions had been an accumulating danger, but its Arab and Israeli neighbors all along argued that their more immediate worries were Tehran’s destabilizing activities in Lebanon, Syria, Yemen, Iraq and Gaza – which continue.

Even President Trump’s fiercest critics concede US unilateral sanctions have reduced the resources Iran can invest in malign activities. Intelligence intercepts and news reports have confirmed that. The world is far from the better agreement the Trump administration wants with Iran, reaching from its nuclear activities to is regional behavior, but the wallet Teheran wields is smaller.

“The US is looking for a change in behavior,” said Brian Hook, the State Department’s Special Representative for Iran, at an Atlantic Council event last week alongside Bahrain’s foreign minister, Sheikh Khalid bin Ahmed Al Khalifa. “Iran would not like to change its behavior, so we are constraining its decision space through our sanctions and deterrent actions. Iran faces a choice. They can accept the diplomatic offramps we have offered over the past year, or watch the economy continue to collapse.”

Lay aside all the transatlantic and domestic differences that have poisoned the Iran debate, and one is left with a simple question: how can one best alter the Iranian regime’s cost-benefit analysis and render unsustainable its support for proxies, terrorism and nuclear arms ambitions?

Hard as it may be for Democrats and some Europeans to swallow, it would be better to circle the wagons than let differences cloud this opportunity. Hard as it may be for some in the Trump administration to accept, it is time for talks where maximalist positions will need to be compromised.

President Trump’s maximum pressure and Iran’s escalating responses have increased the risks of conflict. They have also brought a new chance of resolution that may become the most significant test yet of President Trump’s ability to transform his disruptive foreign policy into positive outcomes.

Must-Reads from a World in Transition

This week’s top reads capture the risk and opportunity swirling around Iran, Nikki Haley’s powerful Foreign Affairs’ piece on China and the Economist’s cover story on what Russia risks in its deepening relations with China. The two must-reads are Tom McTague’s rich profile in the Atlantic of Boris Johnson, the UK’s new Prime Minister, and how childhood trauma shaped him; and the New York Times’ rich reconstruction on the near collapse and rescue of Notre-Dame.

Iran’s Threats Are an Attempt to Negotiate
Suzanne Maloney / POLITICO

Writing from aboard the USS Boxer in the Persian Gulf, David Ignatius reports on both the military muscle and the military restraint the US is showing in deterring Iran. He quotes General Kenneth F. McKenzie Jr., US Central Command commander: “We want to be the calm, steady part of the equation. We don’t want to be the irresponsible actor.” Read More →

Writing for Politico, former State Department official Suzanne Maloney argues that Iran’s interest to return to the negotiating table is hiding in plain sight. “Tehran’s provocations in the Gulf… can be seen as a crucial part of their good cop-bad cop negotiating strategy — one that reinforces persuasion with intimidation,” Maloney writes.

She adds, “Tehran is currently dictating the tempo and intensity of escalation, what happens next depends largely on the Trump administration.” Read More →

Technology: how the US, EU and China Compete to Set Industry Standards
Alan Beattie / FINANCIAL TIMES

President Trump’s blacklisting of Chinese tech companies such as Huawei, writes the FT’s Alan Beattie, has escalated the struggle between “the US and China to control the standards and technologies of the digital economy. The battlefront of that conflict now stretches from establishing market dominance to setting industry standards to influencing regulation.”

Whoever dominates the next wave of tech innovations will also shape rules and norms that guide societies in the next decades. And so, “with its company executives working in close alliance with government, China has adopted an aggressive multipronged strategy to push its standards globally,” he writes. Read More →

Former US Ambassador to the UN Nikki Haley puts down her own marker on China in Foreign Affairs, and perhaps a platform for a future cabinet position. She calls for an urgent, “whole of nation” approach to China’s “intellectual, technological, political, diplomatic and military challenges.” Read More →

One of the most significant yet underreported international events of the past week was the first ever joint Russian-Chinese air patrol mission in the East China Sea and the Sea of Japan, prompting South Korean and Japanese interceptions and protests.

It underscored the increasing depth of the Sino-Russian “comprehensive strategic partnership,” to which the Economist dedicates this week’s cover story. While Mr. Putin might see his friendship with Xi as an opportunity to rattle Western diplomats, the Economist cautions that the partnership is increasingly lopsided.

“Mr Putin’s approach to China is making Russia technologically and politically dependent on its neighbour… For China, a relationship with Russia is a foreign relationship like others—an important one, a complex one, but a matter of statecraft. For Russia, the new closeness strikes at questions of national identity. Russia’s elites have defined themselves by looking west for centuries. Becoming the first European power to fall into China’s orbit is a reversal—even a rejection—of that history.” Read More →

Writing for the Atlantic, Tom McTague delivers a brilliant profile of Boris Johnson, the new British prime minister, with a particularly rich account of childhood traumas that have shaped him to this day as “a man with a yearning to be loved—a “neediness” in the words of one biographer… a ‘man-child politician’ seemingly unable to control himself yet at the same time intensely focused.”

“This is Boris Johnson the enigma,” writes McTague. “The American Englishman, born in the New World but raised in the traditions of the old; a genuine intellect wrapped in a veneer of buffoonery; someone who has dismissed Donald Trump as ‘clearly out of his mind’… yet remains on friendly terms with the notoriously thin-skinned president… a disheveled mess who bumbles from one success to the next.”

With history now resting in his hands, this one’s a must-read. Read More →

This week’s second must-read is the New York Times’ gripping reconstruction – based on scores of interviews with firefighters and officials – of how one of the world’s most revered landmarks was saved from the brink of collapse this April.

“The first hour was defined by that initial, critical mistake: the failure to identify the location of the fire, and by the delay that followed,” write the authors.

“The second hour was dominated by a sense of helplessness. As people raced to the building, waves of shock and mourning for one of the world’s most beloved and recognizable buildings, amplified over social media, rippled in real time across the globe.”

“That Notre-Dame still stands is due solely to the enormous risks taken by firefighters in those third and fourth hours….” Read More →

With Boris Johnson, will Britain get Brexit or a general election?