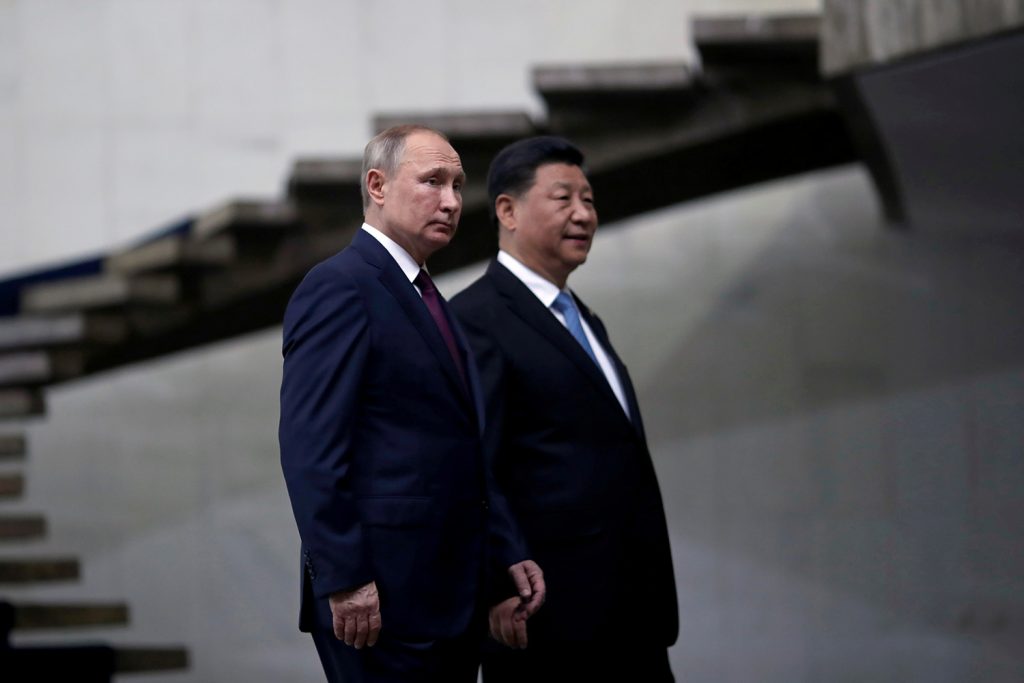 It is the most significant and underrecognized test of Biden’s leadership yet: It could be the defining challenge of his presidency.

This past week, Russia and China simultaneously escalated their separate military activities and threats to the sovereignty of Ukraine and Taiwan respectively—countries whose vibrant independence is an affront to Moscow and Beijing but lies at the heart of US and allies’ interests in their regions.

Even if Moscow’s and Beijing’s actions do not result in a military invasion of either country, and most experts still believe that is unlikely, the scale and intensity of the military moves demand immediate attention. US and allied officials dare not dismiss the certainty that Russia and China are sharing intelligence or the growing likelihood that they increasingly are coordinating actions and strategies.

“That [Russian] buildup has reached the point that it could provide the basis for a limited military incursion,” William J. Burns, director of the Central Intelligence Agency, told the US Senate Intelligence Committee this week. “It is something not only the United States but our allies have to take very seriously.”

On China, the Annual Threat Assessment of the US Intelligence Community said, “China is attempting to exploit doubts about US commitment to the region, undermine Taiwan’s democracy, and extend Beijing’s influence.” Lost in media coverage of the report was a warning about “Russia’s growing strategic cooperation with China… to achieve its objectives.”

Seen independently, the Chinese and Russian challenges would be a handful for any US president. Should China and Russia act more cohesively and coherently, you’ve got a narrative more consequential than any Tom Clancy novel’s plot. It’s a scenario for which the United States and its allies lack a strategy or even a common understanding.

For any who doubt Sino-Russian ambitions, one of my favorite places to read Chinese tea leaves is the Global Times, often a mouthpiece for Beijing’s leadership. In an editorial late last month, under the headline “China-Russia ties deepen while U.S. and allies flail,” it wrote, “The most influential bilateral relationship in Eurasia is the China-Russia comprehensive strategic partnership of coordination for a new era.”

In an only thinly veiled warning to Japan and South Korea, it added, “China and Russia understand the weight of their ties… To be honest, no country in the region can stand alone against either China or Russia, let alone fight against the powers at the same time. It would be disastrous for any country which tends to confront China and Russia through forging an alliance with the US.”

Asked last October about the possibility of a formal military alliance with China, Russian President Vladimir Putin said, “theoretically, it is quite possible.”

In any case, there’s nothing theoretical about the military escalations around Ukraine and Taiwan.

Over the past week, Russia has amassed the largest concentration of troops along Ukraine’s border since the annexation of Crimea in 2014. Ukrainian government officials say Putin has brought more than forty thousand troops near Ukraine’s eastern border for “combat training exercises” over a period of two weeks.

At the same time, China has ramped up its military overflight incursions into Taiwan’s air defense zone to unprecedented levels, having flown more than 250 sorties near the island this year. Just this past Monday, the Chinese military sent twenty-five warplanes Taiwan’s way, a record high since Taiwan began disclosing figures last year.

The Biden administration this week responded to Putin with the carrot of a summit meeting and the stick of new sanctions. On Tuesday, Biden called Putin, signaling he is not looking to escalate tensions with the leader he only a month ago agreed was a “killer.”

China’s incursions over Taiwan came shortly after the US State Department issued guidelines loosening the rules for US government officials engaging with Taiwan. Blinken has said the administration is concerned by China’s “increasingly aggressive actions” and is committed to ensuring that Taiwan “has the ability to defend itself.” The United States further demonstrated its support on Wednesday by sending an unofficial delegation consisting of a former US senator and two former US deputy secretaries of state to Taiwan.

This unfolding great-power drama couldn’t come at a worse time for the Biden administration, whose officials won’t even clock their one-hundredth day in office until April 30. Yet that is probably the point for Putin and Chinese President Xi Jinping, as they look to gain advantage before Biden can secure surer footing through policy reviews and by staffing up key leadership positions.

These real-world events also complicate the Biden administration’s carefully laid plans to methodically sequence its actions, arguing reasonably that US renewal is a prerequisite for effective global leadership.
Biden’s aim is to quell COVID-19 through accelerated vaccine distribution, to gin up economic momentum and competitiveness through four trillion dollars of stimulus and infrastructure spending, and to restore relations with key allies, a goal reflected in Biden’s meeting this week with Japanese Prime Minister Suga Yoshihide. The Biden administration also confronts a number of other foreign-policy challenges simultaneously, ranging from the president’s announcement this week that he would withdraw US troops from Afghanistan by September 11 to efforts to restart nuclear talks with Iran despite last Sunday’s attack on Tehran’s Natanz nuclear enrichment facility.

That’s a lot for any new president to handle. However, how deftly Biden addresses the combined, growing challenge from Russia and China is the one that will shape our era.

Most chilling was a surprise, sixteen-minute lecture about America’s racial problems and democratic failings delivered by Yang Jiechi, President Xi’s top foreign-policy aide. Embedded within it was a message that Beijing will demand to be treated as an equal by Washington—and that China’s time had arrived.

#2 The U.S. and Europe must be ready to stand up to any Russian aggression in Ukraine
Carl Bildt / THE WASHINGTON POST

Former Swedish Prime Minister Carl Bildt, one of the most significant European strategic thinkers, is worth reading in the Washington Post on the challenge Russia’s troop buildup near Ukraine poses to the West. “The security and stability of the continent is on the line,” he writes.

“The West must take decisive action,” writes Bildt, who is also an Atlantic Council International Advisory Board member. “Russia could face severe penalties, such as getting kicked out of the international financial system as part of a response. If that were to happen, not even China might be able to rescue the Russian economy.”

Bildt makes one thing clear: Russian troops poised on the Ukrainian border “are not on a holiday excursion.” Moscow may be thinking “this might be the time to do some ‘correction’ of the situation with Ukraine.” Read More →

Biden this week took the biggest foreign-policy risk of his young presidency, against the advice of his generals, in deciding to withdraw all US troops from Afghanistan unconditionally on September 11.

Ignatius captures the drama for Biden, who as vice president a decade ago “thought the Pentagon was muscling a new president, Barack Obama, into adding more troops for an unwinnable war.” Ignatius calls his withdrawal decision now “a gutsy move because the price of being wrong is enormous.”

He notes that while “sometimes cutting the knot and removing U.S. troops opens the way for peace; more often, in recent years, it has been a prelude to greater bloodshed.” One only needs to look at Iraq, where troops had to return to help defeat the Islamic State of Iraq and al-Sham five years after withdrawing.

“Now that Biden has made his choice, he must pray that the troops he is bringing home will never have to go back,” Ignatius concludes. Read More →

With so much US reporting on the more nefarious sides of Chinese power, Zak Dychtwald provides this week’s must-read in the newest edition of Harvard Business Review on the more human reasons why China has become a world leader in innovation, particularly of the digital variety.

“To understand what’s powering the global rise of Chinese companies,” he writes, “we need to recognize that China now has at its disposal a resource that no other country has: a vast population that has lived through unprecedented amounts of change and, consequently, has developed an astonishing propensity for adopting and adapting to innovations, at a speed and scale that is unmatched elsewhere on earth.”​​​​​​ Read More →

Writing in Foreign Affairs, Matthew Slaughter and David McCormick take a deep look at how “the global economy has become a perpetual motion machine of data: it consumes it, processes it, and produces ever more quantities of it.”

Slaughter, dean of the Tuck School of Business at Dartmouth College, and McCormick, CEO of Bridgewater (and chairman of the Atlantic Council International Advisory Board), argue in this week’s must-read that it is time for Washington to establish a new framework for international data.

“If the United States does not shape new rules for the digital age, others will,” they write. “China, for example, is promulgating its own techno-authoritarian model, recognizing that shaping the rules of digital power is a key component of geopolitical competition. The United States should offer an alternative: with a coalition of willing partners, it should set up a new framework, one that unleashes data’s potential to drive innovation, generate economic power, and protect national security.” ​​​​​Read More →

Today the Biden administration hit thirty-two Russian government officials and entities, plus six companies, with economic sanctions in retaliation for the SolarWinds hack, 2020 election interference, and other Russian malfeasance. What measures matter most?

What does it say about our system of government that hard truths are not absorbed? This year’s Annual Threat Assessment and Global Trends 2040 are blunt about the challenges facing the United States. But the warnings about China should have been heeded a decade or more ago.

How much support does the Chinese Communist Party really have?

The precarious balancing act that China’s leaders have struck—one that mixes strident nationalism and policies that push overheated economic growth with overwrought propaganda—will continue to present them with daunting challenges.