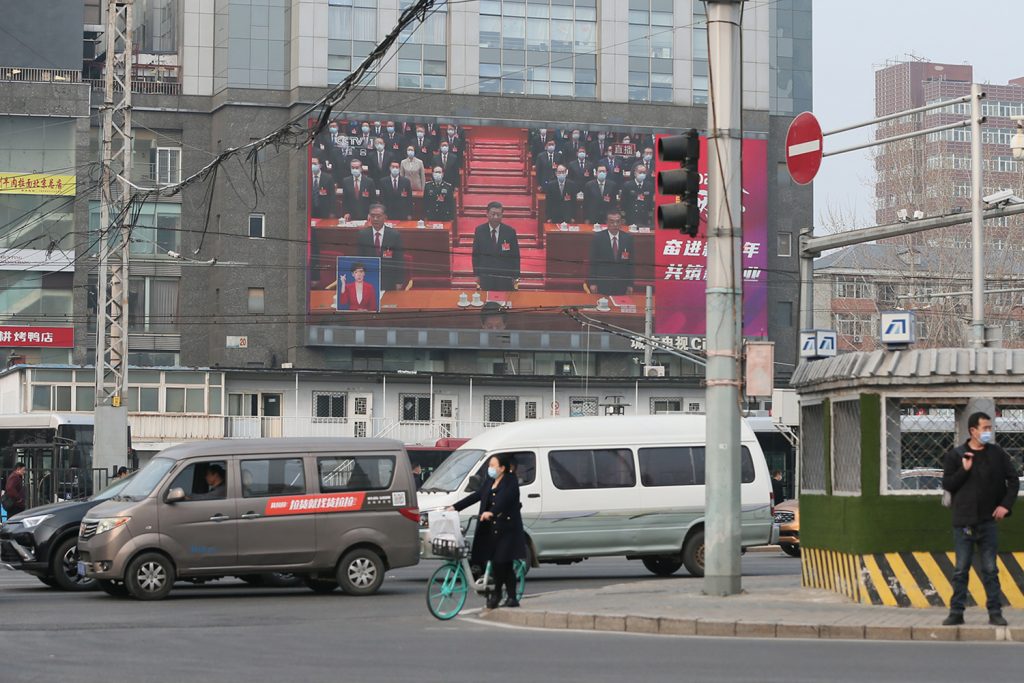 To watch the news broadcast inside China is to see the United States in chaos: police brutality against African Americans, the January 6th storming of the US Capitol, and people freezing to death during the Texas power shortages. When Chinese state councilor Yang Jiechi berated the United States, mentioning the Black Lives Matter movement as evidence of its human-rights abuses in a recent meeting with US Secretary of State Antony Blinken in Anchorage, he was celebrated by the Chinese media for highlighting the hypocrisy of the American government. Anger at multinationals pledging to no longer source cotton from Xinjiang, in response to China’s treatment of the Uighur minority in the region, has led to an angry backlash, with Chinese consumers burning Nike shoes and denouncing Swedish clothing retailer H&M.

The onslaught of negative news about the United States is part of an effort to make the Chinese Communist Party (CCP) look capable in contrast to a floundering US administration, thereby convincing the Chinese people that they should be pleased with their current leadership. This is important, as China has ever fewer supporters abroad while US President Joe Biden works to strengthen alliances in Europe and Asia (though Beijing has announced its intention to boost ties with its old allies Russia and North Korea). A recent survey by Gallup revealed that American perceptions of China are at an all-time low, worse even than after the Tiananmen Square massacre of 1989. The Chinese people have typically viewed other nations and particularly the United States showing respect for China as a source of legitimacy for the party and a demonstration of its growing global heft.

Serious challenges to China’s future economic growth make it doubly important to bolster popular support for the leadership. China’s gross domestic product (GDP) grew by 6.5 percent in the final quarter of last year—faster than almost any country—and policymakers expect to easily meet their target of over 6 percent growth for this year. But the impressive numbers mask problems. In order to keep their economies humming during the pandemic, China’s local governments built up a potentially destabilizing $2.3 trillion of hidden debt in 2020, according to a Bloomberg report citing a Chinese government-affiliated think tank.

Income inequality in China has gotten worse thanks to a lopsided recovery from the COVID-19 crisis that has mainly benefitted the wealthy and jeopardized the household consumption of the less well-off. Last year, China’s richest 20 percent had an average disposable income of over 80,000 yuan ($12,000), 10.2 times that of the poorest one-fifth. That surpassed the United States, where the multiple was about 8.4, according to the Organization for Economic Co-operation and Development. As one study put it, “the pandemic has exacerbated [China’s] preexisting inequalities.”

For now, however, Chinese leaders are touting their success in controlling the pandemic and returning the economy to normalcy far faster than most of the world has. At the same time, Beijing has squashed questions about COVID-19’s origins and the government’s initial cover-up of the outbreak. And even as China struggles to vaccinate its own people, it has sent Chinese-developed vaccines around the world—sometimes charging high prices for them—as a gesture of its magnanimous goodwill. Meanwhile, the Chinese media has denigrated US vaccines as unsafe.

So is all of this a sign of strength or weakness? It seems to be both. China’s leaders are emboldened by their economy outpacing global growth as they witness the West’s real problems. But they are also deeply worried about whether the economic momentum, and the public support that comes with it, will last. “This is a party that lives in a state of catastrophic anxiety,” Matt Pottinger, the former deputy US national security advisor, said in a recent dialogue I moderated at the Mansfield Center in Montana.

This year and next are of critical importance to the Chinese leadership. They are planning celebrations heralding the hundredth anniversary of the Chinese Communist Party, falling on July 1 this year, which will highlight the elimination of extreme poverty, rising living standards, and economic growth, among the nation’s other successes. A quinquennial party congress—the country’s top political gathering—will be held in the fall of 2022, setting key policies that will define China’s future path and deciding the top leaders for the next decade. The Winter Olympics will be held in Beijing later that year.

At the center of all this is Xi Jinping, who has established himself as China’s most powerful and ambitious leader in decades and is expected to break political norms and stay on for at least a third five-year term at next year’s twentieth Party Congress. Xi’s decision to abandon former leader Deng Xiaoping’s mantra of tao guang yang hui, or “keep a low profile and bide one’s time,” and push much more rapidly for national glory is the driving force behind China’s actions—from its bellicose diplomats to the angry pushback against international criticism of the horrendous human-rights tragedy in Xinjiang. In Xi’s vision, China must replace the West as a global model by “blazing a new trail for other developing countries to achieve modernization” and by offering “Chinese wisdom and a Chinese approach to solving the problems facing mankind,” as he put it in 2017.

Might Xi and the party face internal opposition? There is no doubt that powerful political families have been upset to see their wealth diminished by Xi’s sweeping crackdown on corruption. Party cadres and intellectuals are unhappy with Xi’s unprecedented power grab and decision to discard the rule-by-consensus norm that Deng set. Private entrepreneurs are spooked by Xi’s extension of party control over their businesses. But for now, Xi’s unrivaled power has cowed any serious opposition and his push to raise China’s global influence is widely supported. Xi, according to Pottinger, “is actually representing the grand strategy and aspirations that the Chinese Communist Party has held for a long time. It’s simply that he has accelerated them.”

With the major caveat that limits on free expression affect the Chinese people’s willingness to openly criticize their leaders, polls show growing support for the party. And that is understandable. People’s lives have gotten much better over the last few decades, and it is natural for the Chinese to take pride in the growing strength of their country after years of feeling like a little brother to an often hectoring United States. Progress on combating the pandemic has also lifted support for the Chinese regime, and a barrage of propaganda from China’s press constantly reinforces the idea that life in China is now better than it is in the rest of the world.

But positive sentiments can quickly evaporate. Research in China by Wang Chengli of the Shanghai University of Finance and Economics and Huang Haifeng of the University of California, Merced has shown that when a government is exposed as having misled or deceived its own people, such revelations can have “lasting effects on government credibility and can erode citizen satisfaction with the government.” Even more significant is the peril of elevated expectations. Many young Chinese have only known rising GDP and living standards. The CCP could face blowback if the economy slows substantially or, for example, following a failed Chinese military foray into Taiwan. The latter scenario would be an enormous blow to the prestige of a government that has based one plank of its legitimacy on reunifying a divided China and protecting the country’s sovereignty. And the economic costs of an attempted invasion would damage the party’s standing too.

“Satisfaction and support must be consistently reinforced,” write Edward Cunningham, Tony Saich, and Jesse Turiel of the Harvard Ash Center. “[T]his is a double-edged sword. Citizens who have grown accustomed to increases in living standards and service provision will expect such improvements to continue, and citizens who praise government officials for effective policies may blame them when policy failures affect them.” The precarious balancing act that China’s leaders have struck—one that mixes strident nationalism and policies that push overheated economic growth with overwrought propaganda—will continue to present them with daunting challenges.

Dexter Tiff Roberts is a senior fellow in the Asia Security Initiative at the Atlantic Council’s Scowcroft Center for Strategy and Security. Previously, he was China bureau chief and Asia news editor at Bloomberg Businessweek, based in Beijing for more than two decades. This is the first in a series of posts on China made possible by a grant from the Charles Koch Institute.

China’s strengths shouldn’t blind us to its weaknesses

China is a “pacing threat” and the United States’ strongest competitor. But it isn’t an unstoppable colossus. There may be a fatal flaw in China’s aspirations.

Three implications of the US-China confrontation in Anchorage

After the meeting in Alaska, sanctions on China’s officials, and other key events of the past week, here are three main takeaways.

Image: Chinese President Xi Jinping attending the closing ceremony of National People's Congress (NPC) is seen on a monitor in Beijing, China on March 11, 2021. The Yomiuri Shimbun via Reuters