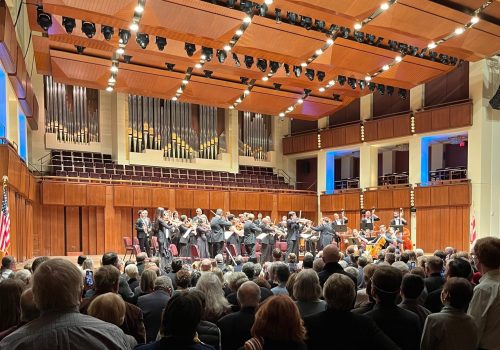 Ukraine's defiant spirit was on display on October 18 at a Kennedy Center concert organized by the Chopivsky Family Foundation and featuring the New Era Orchestra of Kyiv together with celebrated violinist Joshua Bell.

Jacob Heilbrunn is a nonresident senior fellow at the Atlantic Council’s Eurasia Center and editor of the National Interest, a foreign policy magazine that was founded by Irving Kristol in 1985. He began his career as an assistant editor at the magazine, where his first issue was one featuring Francis Fukuyama’s “The End of History?” essay. He went on to become a senior editor at the New Republic and an editorial writer for the Los Angeles Times. He has written on both foreign and domestic issues for numerous publications including the New York Times, the Washington Post, the Wall Street Journal, Financial Times, Foreign Affairs, Reuters, Washington Monthly, and the Weekly Standard. He has also written for German publications such as Cicero, the Frankfurter Allgemeine Zeitung, and Der Tagesspiegel.

In 2008, his book They Knew They Were Right: the Rise of the Neocons was published by Doubleday. It was named one of the one hundred notable books of the year by the New York Times.