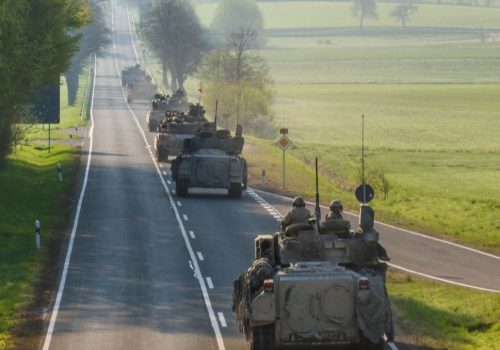 Dr. John R. Deni is a nonresident senior fellow with the Scowcroft Center’s Transatlantic Security Initiative. He is also a research professor of Joint, Interagency, Intergovernmental, and Multinational (JIIM) Security Studies at the Strategic Studies Institute, the research arm of the US Army War College, and an adjunct professorial lecturer at the American University’s School of International Service.

Previously, he worked for eight years as a political advisor for senior US military commanders in Europe. Prior to that, he spent two years as a strategic planner specializing in the military-to-military relationships between the United States and its European allies. While working for the US military in Europe, he was also an adjunct lecturer at Heidelberg University’s Institute for Political Science where he taught graduate and undergraduate courses on US foreign and security policy, NATO, European security, and alliance theory and practice.

Before working in Germany, Dr. Deni spent seven years in Washington, DC as a consultant specializing in national security issues for the US Departments of Defense, Energy, and State. Dr. Deni completed his undergraduate degree in history and international relations at the College of William & Mary. He holds an MA in US foreign policy from the American University in Washington, DC, and a PhD in international affairs from George Washington University. He is the author or editor of several books, peer-reviewed monographs and journal articles, book chapters, essays, and op-eds all of which can be found at www.johnrdeni.com.