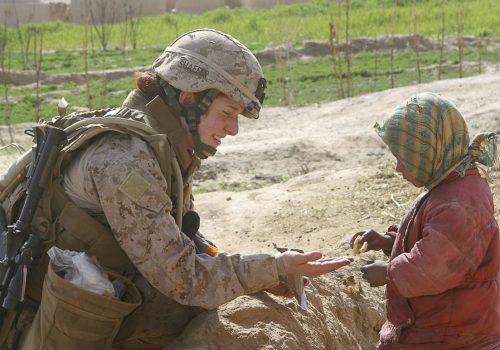 NATO leaders are finally focusing on human security, a major step toward a broader vision of crisis management.

Embracing Afghan refugees is a strategic opportunity for the US

More than simply a humanitarian gesture, it represents the best possible continuation of US foreign policy.

Sarah Dawn Petrin is a nonresident senior fellow at the Transatlantic Security Initiative in the Atlantic Council’s Scowcroft Center for Strategy and Security. Petrin is an author, humanitarian, and peace and security advisor. She recently served as a peace operations and human security analyst with the US Army Peacekeeping and Stability Operations Institute, where she provided expert advice on army, joint and multinational concepts, doctrine, and training, and monitored trends in United Nations (UN) peacekeeping exercises and NATO operations in cooperation with the Joint Chiefs of Staff and the Office of the Secretary of Defense.

Petrin formerly served as a senior civilian advisor to NATO on the protection of civilians and advised the Military Contributions to Peace Support Operations working group. She supported revisions to the US Peace Operations Manual, NATO’s Stability Policing concept, and planning scenarios for UN Peacekeeping exercises. She also contributed to the Military Reference Guide on the Protection of Civilians and the Mass Atrocity Response Operations project. She previously served as the managing director of Protect the People where she facilitated trainings for the US military and partner nations on vulnerable populations including refugees, migrants, and victims of human trafficking.

Petrin has over twenty years of experience in the humanitarian sector, leading teams in complex emergencies and advising United Nations agencies, the International Committee of the Red Cross, and non-governmental organizations in over twenty countries. She has managed programs for refugees and internally displaced people along the borders of Afghanistan-Pakistan, Kenya-Somalia, and Thailand-Myanmar and responded to major disasters such as the global Ebola response, Southeast Asian tsunami, Hurricane Katrina, and the Haiti earthquake. Early in her career, she served as a legislative aide to US Senator Olympia J. Snowe (R-ME).

She has written numerous publications including ”Human Security in US Military Operations;” ”The US Women Peace and Security Agenda and UN Peacekeeping” for the US Civil Society Working Group on Women, Peace and Security; and “Syrian Women in Crisis” for the Georgetown University Institute for Women, Peace and Security. She advised the Center for Strategic and International Studies Task Force on Women’s and Family Health, providing policy recommendations in ”Health Implications of the Global Refugee and Migrant Crisis.” Her first book,  BRING RAIN: Helping Humanity in Crisis, was released in March 2021.

Petrin graduated from Oxford University with a master of studies in forced migration from the Refugee Studies Center and a distinction for her research on refugee return and state reconstruction. She also holds a BA in international relations, African studies, and French from Gordon College in Massachusetts, where she was a Pike scholar and AJ Gordon scholar.