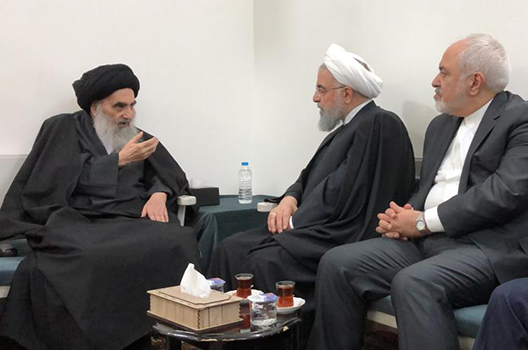 As Iraq’s Grand Ayatollah Ali Sistani and Iran’s Ayatollah Ali Khamenei age, the international community of Shia Muslims faces a looming void in religious and political leadership. Whoever succeeds these leaders will determine the extent of international influence in Iraq, the direction of Iran’s foreign policy and nuclear program, and the nature of both countries’ relations with the United States. As the Atlantic Council’s Iraq Initiative Director Abbas Kadhim and Future of Iran Initiative Director Barbara Slavin argue in their new Issue Brief “After Sistani and Khamenei: Looming Successions Will Shape the Middle East,” the successors to these two prominent leaders will be paramount in defining the political and social landscape of Iraq, Iran, and the greater Middle East.

Throughout the paper, Kadhim and Slavin explain Sistani and Khamenei’s unique political philosophies. Although Sistani is primarily a religious figure, he possesses unparalleled de facto authority in Iraqi politics. With his support, Iraq established a civil state and is pursuing democratization. Meanwhile, Khamenei leans right in both Iran’s foreign and domestic policy, supporting the opportunistic expansion of influence in the region and repressing democratic aspirations at home. Changes in either of these leadership styles could disrupt the current trajectory of Middle Eastern politics, particularly as tensions between Iran and the United States continue to mount.

Given the varied succession processes, the landscape of the Middle East also depends heavily on the sequence of Sistani and Khamenei’s deaths. Because there is no formal process to replace Sistani, his passing is likely to create a vacuum in Iraq and provide Iran with an opportunity to expand its influence. However, if Khamenei passes away first, his successor will be appointed quickly but may be incapable of handling Iran’s turbulent domestic politics. The Issue Brief assesses prospective successors to Sistani and Khamenei, considers the domestic and foreign policy implications of each, and discusses the Middle East’s prospects given different scenarios of succession.