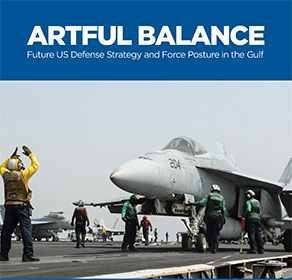 Saab and Pavel argue that it is more critical than ever that US defense strategy in the Gulf be designed around reassuring partners, deterring adversaries, continuing to conduct counterterrorism missions, and advancing needed political development to help dry up the sources of extremism and promote internal stability. Underwriting a new force posture in the region to support that strategy effectively is just as important. The authors propose a more flexible and dynamic force posture in the Gulf that can help protect US long-term interests and those of its partners. To achieve this, they recommend a series of incremental improvements to current US posture to increase its geographical distribution, operational resiliency, political sustainability, and tactical robustness.

Saab and Pavel’s recommendations include:

The Pentagon must consider a formal defense treaty with its Arab Gulf allies in light of Iran’s ongoing attempts to destabilize the region politically, according to a new Atlantic Council report. “While we have very effective forces and a strategy guiding those forces, it’s our sense that there’s enough going on in the world that […]

Securing the Middle East after an Iran nuclear deal is the next big challenge for both the region and the international community. The United States and its allies have engaged in tireless diplomacy with Iran over the past few years to produce an agreement that would limit Tehran’s nuclear program for the next decade and […]