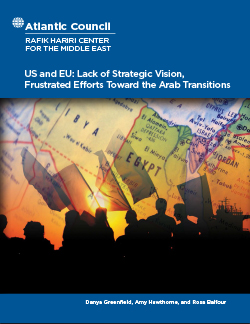 A new Atlantic Council report, US and EU: Lack of Strategic Vision, Frustrated Efforts Toward the Arab Transitions, argues the United States and its European allies lack strategic vision in supporting the Arab countries that embarked in 2011 on a democratic path—Egypt, Libya, Tunisia, and Yemen—and have not lived up to their stated commitments for robust support. While the European Union (EU) and the United States have tried to advance specific assistance initiatives in the transitioning countries—some of which were announced more than two years ago—they have not made as much headway as hoped over the past year. In part, the lack of progress is due to serious political and security challenges in these countries, yet bureaucratic delays, insufficient funding, and inadequate political will in Brussels and Washington also hampered success.

Report authors Danya Greenfield, deputy director of the Atlantic Council’s Rafik Hariri Center for the Middle East, and Senior Fellow Amy Hawthorne, together with Rosa Balfour, head of the Europe in the World Program at the European Policy Center in Brussels, argue that despite clear convergence between the United States and the EU in values and professed objectives in the Arab transitioning countries, the transatlantic powers have not been able to leverage their joint weight and influence toward the Arab transitions. The report’s central conclusion is that democratic outcomes in the region remain critical to Western interests; the authors argue that the best hope for encouraging the development of prosperous Arab democracies with inclusive and ultimately stable governing systems, is a reenergized, redesigned strategic approach for Western support. Specifically, the authors offer the following recommendations:

A transatlantic approach for the Arab world: Stability through inclusivity, good governance, and prosperity

A new Atlantic Council report warns against the tendency of Europe and the United States to sideline political and economic reform in the Middle East while they pursue urgent security priorities in this turbulent region. Instead, the transatlantic partners should forge a shared strategy to encourage political systems that can protect Arab citizens’ basic rights, […]

US and EU: Lack of Strategic Vision, Frustrated Efforts Toward the Arab Transitions

A Transatlantic Strategy for a Democratic Tunisia

By Rafik Hariri Center for the Middle East