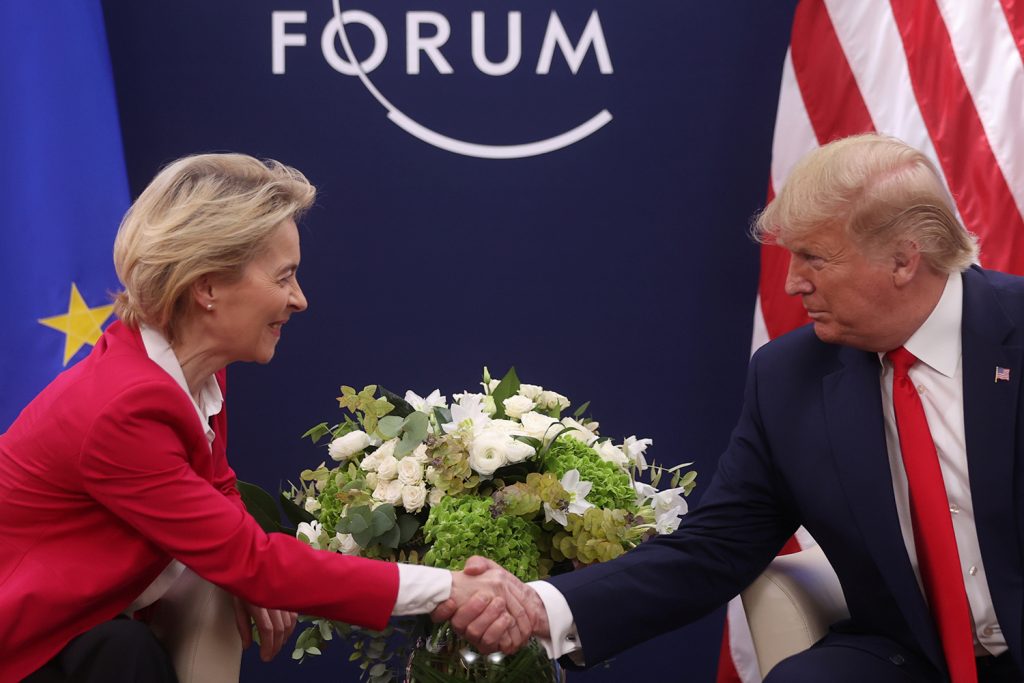 With the “phase one” trade deal behind them, the United States and China will now probably shift attention to sorting out their economic and trade relationships with Europe. Caught in the middle of the US-China trade war and geopolitical competition, the European Union (EU) has tried to steer an independent course, balancing security and geopolitical concerns with economic and business needs. Doing so, however, has exposed many differences vis-a-vis the United States as well as China—such as Europe’s criticism of the phase one deal as “not going to be good for competitiveness and jobs.” The new “geopolitical” European Commission—as President Ursula von der Leyen has characterized her administration—will have to navigate these vexing problems, both externally in asserting its own identity and, perhaps more importantly, internally in forging a consensus among EU members allowing it to do so.

The EU and the United States

The disagreements between Brussels and Washington seem to multiply all the time. US President Donald J. Trump’s skeptical attitude toward the EU (“Europe treats us worse than China”) as well his administration’s willingness to use hardball tactics to put pressure on European allies (threatening to impose 25 percent tariffs on European autos if the UK, Germany and France don’t call out Iran), has made overcoming these differences even harder. Against these headwinds, a recent visit to Washington by the EU’s new Trade Commissioner Phil Hogan may offer a glimmer of hope—in the shape of a tripartite agreement with the United States and Japan demanding serious World Trade Organization (WTO) reform to deal with China’s subsidy of its state-owned enterprises (SOEs). However, it should be noted that for the three, ganging up on China is the lowest of the low hanging fruits.

Nevertheless, that breakthrough seems to have been boosted by a truce reached on January 19 by French President Emmanuel Macron and Trump to avert a tariff war on digital taxation. France has agreed to delay the collection of its digital services tax (DST) and Washington agreed to not impose retaliatory tariffs (of up to 100 percent on $2.4 billion of French goods) until the end of 2020, to give time for the Organisation for Economic Cooperation and Development (OECD)-sponsored multilateral negotiations for an international agreement on digital taxation to bear fruit. The “unified approach” proposal, released by the OECD last October, tries to combine the three main ideas currently under discussion, and therefore can be expected to ease the deadlock which had frustrated many countries—and led some, such as France, the UK, Italy, and Austria, to adopt their own versions of DST.

The France-US truce can serve as a template to deal with the remaining threats of US tariffs on other countries adopting DSTs—the situation is fluid and needs to be monitored. Meanwhile attention has also focused on other trade disputes. Washington has already imposed 10 percent tariffs on large European civil aircrafts and 25 percent tariffs on selected farm and other goods (worth $7.5 billion) consistent with the WTO’s authorization of measures in response to EU subsidies for Airbus. The Trump administration has also planned to hike tariff rates to 100 percent following the WTO’s ruling on December 2, 2019 against the EU claim of having stopped providing subsidies to Airbus. A decision on the tariff increase may come any time after the public comment period has ended on January 13, 2020. Such an increase could influence the way the EU determines its own tariffs on US goods after the WTO assesses damages caused by the state tax breaks enjoyed by Boeing—the EU is unhappy with the US Airbus tariffs but cannot appeal since the WTO Appellate Body has been rendered inoperative.

Another growing irritant is the EU plan to introduce a carbon border tax on imports from countries deemed not having sufficiently strong climate policies—the aim is to maintain an even playing field for European producers having to buy carbon allowances. Such a tax will likely be contested as a violation of WTO rules as well as provoke retaliation by affected countries such as the United States. To further complicate matters, Macron has declared that France will not sign a trade agreement with any country not adhering to the Paris climate agreement—which the United States has formally withdrawn from.

Also poisoning the atmosphere is a plethora of US sanctions—many of which affect the EU. Most direct are US sanctions on companies working on the Nord Stream II gas pipelines to prevent increasing European dependency on Russian energy supplies. This has caused Allseas, a Swiss-Dutch company, to suspend laying pipes in the remaining 100 miles of the project. Furthermore, Washington has recently expanded sanctions on Iran to cover the construction, mining, manufacturing, and textiles industries, raising the risk of secondary sanctions on European companies doing any business with Iran. In particular, if Europe’s INSTEX—an arrangement designed to offset EU companies’ export and import to Iran, bypassing payments through the banking system—becomes operational, it would further irritate the United States. Last but not least, the US campaign to exclude Chinese telecom giant Huawei from participating in building out 5G infrastructures has put many EU countries in a difficult position.

To prevent a further deterioration of the situation, it is crucial that the EU and United States agree on an agenda to start trade talks. This has so far been elusive as Washington insists on including agriculture while the European Commission just wants to discuss industrial goods, constrained by the mandate given to it by EU members. Unhappy with the large goods trade surplus the EU has with the United States (2019 will exceed the $169 billion posted in 2018), Trump has threatened tariffs on EU cars and car parts on national security grounds to break the stalemate. He repeated these threats at this year’s World Economic Forum meeting at Davos. Even though his authority to impose tariffs under Section 232 of the Trade Expansion Act of 1962 lapsed after the November 14, 2019 deadline, he can initiate a Section 301 (Trade Act of 1974) investigation, with broader scope, into alleged unfair practices by the EU in the auto trade—laying the basis for tariffs. Developments on this front will determine the fate of EU-US trade tensions.

The EU and China

An important goal this year for the EU and China is to complete the Comprehensive Agreement on Investment in time for the summit of leaders from both sides scheduled for September in Leipzig. Germany, holding the Presidency of the EU in the second half of 2020, hopes to present a unified 27+1 approach to China at the summit, in an effort to counter China’s “divide and conquer” tactics. Since 2012, China has developed a framework to cooperate with Central and Eastern European countries called 16+1—recently extended to 17+1 with the addition of Greece—complementing its dealings with the EU. Indeed, to send a message of its preference, Prime Minister Li Keqiang will host the EU-China Summit in Beijing on March 30-31, but President Xi Jinping will host the 17+1 Summit two weeks thereafter.

In addition, despite opposition by the European Commission, twenty-four European countries, many of them EU members, have signed Memorandums of Understanding (MOUs) with China’s Belt and Road Initiative (BRI). Despite the controversy associated with numerous BRI projects elsewhere, the success of Greece’s Port of Piraeus, which since the sovereign debt crisis has increased its cargo volume more than five times under the management and ownership of COSCO (China Ocean Shipping Corporation) to become the 6th largest cargo port in Europe, serves as an advertisement to European countries hungry for infrastructure investment.

Moreover, the EU must expect that Beijing will push back on the declaration of China as “an economic competitor and systemic rival” in the EU 2020 Strategic Agenda, as well as the new EU policy on screening foreign investments (aimed at China). Since then, various senior Chinese officials have warned of serious “trade and other consequences of bad decisions,” especially in the possible exclusion of Huawei. In this context, it is interesting to see how China reacts to the EU joining up with the United States and Japan to demand WTO reforms to deal with China’s SOE subsidies.

In short, with the US-China trade war held in a standstill for the moment, the EU’s pending economic and trade problems with both countries will command center stage this year.

Hung Tran is a nonresident senior fellow at the Atlantic Council’s Global Business and Economics Program and the former executive managing director at the International Institute of Finance.