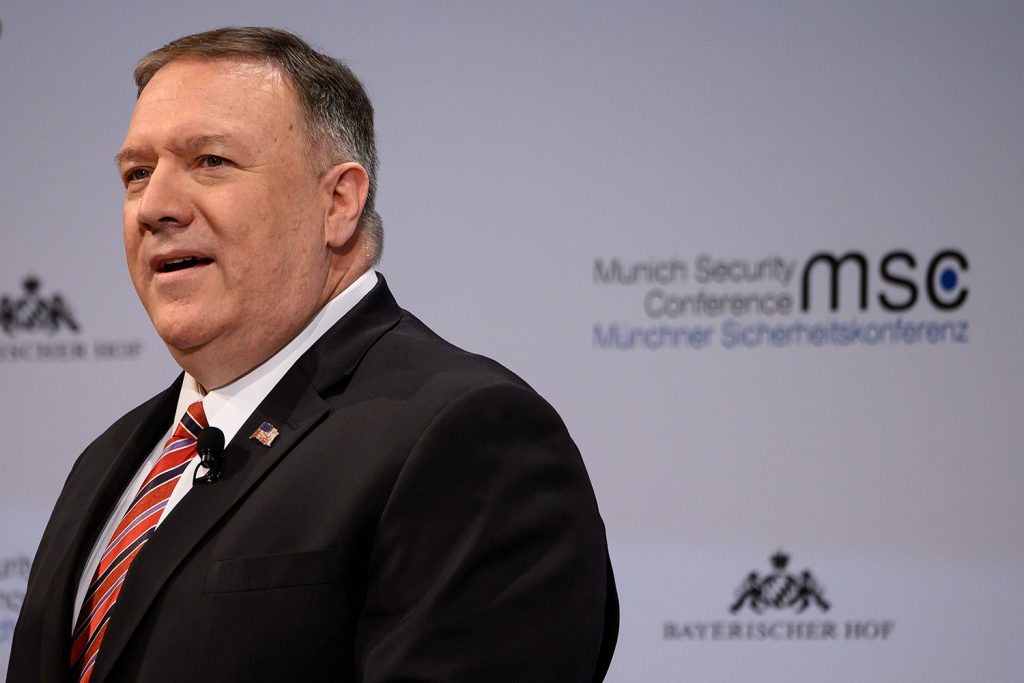 Munich, Germany, February 15, 2020:  The United States announced a major commitment to reinforce energy security and economic growth in Central Europe. The announcement by US Secretary of State Michael Pompeo was made during his address before the annual Munich Security Conference convening top political, business, and academic leaders from around the world.

“The West is winning, we are collectively winning, we are doing it together, and as a brand new statement today of our support for sovereignty, prosperity, and energy independence for our European friends, today I want to announce that through the International Development Finance Corporation and with the support or our United States Congress, we intend to provide up to one billion dollars in financing to Central and Eastern European countries of the Three Seas Initiative,” Pompeo said.

The Three Seas Initiative is an effort to accelerate the development of cross border energy, transport, and digital infrastructure in Central Europe, the region between the Baltic, Black, and Adriatic Seas. The Initiative was launched by Central European leaders in 2016 and has received strong diplomatic endorsement by the United States, Germany, and the European Union. The US Government announcement in Munich was the first major commitment of financial support from a country beyond the Three Seas region and it precedes the initiative upcoming Summit and Business Forum hosted in Tallinn by the president of Estonia on June 15-17.

The Initiative’s objectives are to stimulate economic growth, strengthen the region’s and Europe’s energy security by diversifying sources of supply, and to deepen Central Europe’s integration with Western Europe. Members of the Initiative are all EU members states and include Estonia, Latvia, Lithuania, Poland, Czech Republic, Slovakia, Austria, Hungary, Slovenia, Croatia, Bulgaria, and Romania.

Jones co-chaired an Atlantic Council Task Force that produced a report, Completing Europe: From the North South Corridor to Energy, Transport and Telecommunications Union that contributed to the launch of the Three Seas Initiative.

The Initiative is intended to help Central Europe overcome a $500 billion+ infrastructure deficit that is a legacy of the Soviet occupation.  “The Three Seas region is all about eliminating the legacies of a divided Europe,” said Fred Kempe, president and CEO of the Atlantic Council. “It shows continued US determination to fulfill—to complete—the vision of Europe that is undivided, secure, free, and prosperous. This development moves the Three Seas Initiative from the realm of rhetoric into the domain of operational significance, and it deserves support from the European Union and all our European friends and allies”

The US announcement in Munich is a significant diplomatic accomplishment for Central Europe’s leaders. “This is a huge success for Central Europe,” said Atlantic Council senior fellow Ian Brzezinski. “The Three Seas was launched by democracies of Central Europe. It has been led and championed by the nations of Central Europe. They, on their own initiative, brought to the table an undertaking that is geopolitically significant, has real economic value, and promises to generate real business opportunity. They have earned this investment from the United States.”

“A unique characteristic of the Three Seas Initiative is its effort to marshal international private capital markets to accelerate the region’s development. By putting their own money into the Fund—their own skin into the game so to speak—Central Europe is demonstrating determination, self-confidence and self-initiative and ingenuity to fulfill a long-standing vision of an undivided Europe,” Brzezinski said.

This new level of US support to the Three Seas Initiative occurs amidst reanimated great power competition and concerns about Russian pressure and Chinese economic influence in the region. Ian Brzezinski noted that “this US initiative portends a trifecta for the Washington’s foreign policy:  it provides justified support for some of America’s closest allies. It reinforces Central European efforts to counter malign Russian and Chinese pressure and influence and if it directs resources into the Three Seas Investment Fund and projects, it will likely yield in the years to come a healthy return.”