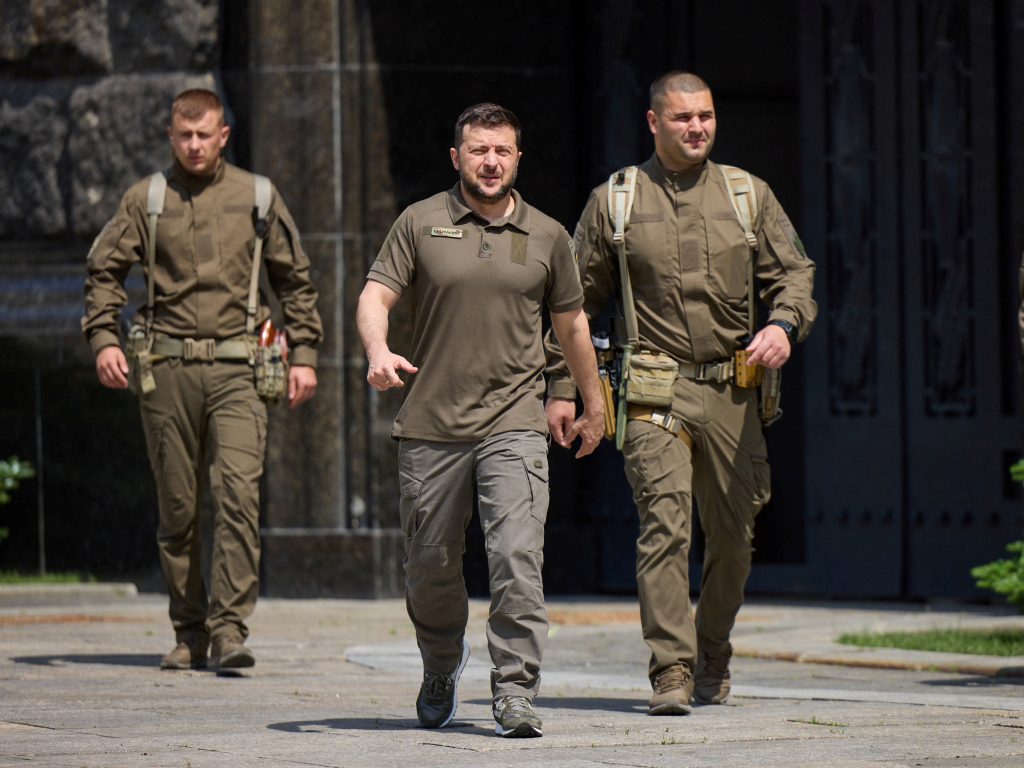 Russia’s invasion of Ukraine has provided a brutal reminder to the world—but especially to the West—that hard power matters and that employing military means to alter political realities has not been relegated to a distant past. For countries in the Middle East and North Africa, this is something with which they have lived for decades, and their response to the war in Ukraine has generally been to remain neutral and pursue their own interests.

Several major factors have defined the perceptions and reactions of most Arab countries. First, they are trying to avoid taking sides in a conflict that is far from their shores. By hedging their bets among the major powers, they seek to position themselves to negotiate with all of them—the United States, Russia, and China. This was most evident in the reluctance of key Arab country that initially voted in favor of United Nations Security Council resolution demanding Russia end its invasion of Ukraine, to abstain from a vote to suspend Russia from the UN Human Rights Council.

Oil-producing states have also refused to increase oil and gas production at the request of the United States to compensate for the cutback in demand for oil and gas from Russia. Not only do these countries benefit from the higher prices of hydrocarbons, they also do not want to be seen as taking steps that are designed to circumvent Russia.  In essence, by diversifying their relationships they are also preparing for a Middle East in which the role of the United States will be reduced.

Second, from the perspective of many Middle Eastern governments, the war in Ukraine highlights Western double standards. They see that the United States invaded Iraq in 2003 with little of the reaction from states around the world that has accompanied Russia’s invasion of Ukraine. For many Arab regimes, the invasion of Iraq was the opening salvo in the region’s two-decade-old upheaval. The invasion not only dismantled Iraq’s ruling party and state institutions, it also opened the door to the expansion of Iranian influence in Lebanon, Iraq, and beyond. The onset of the Arab Spring in 2011, and the autocratic backlash against these uprisings, plunged countries into deep crises. It also allowed Tehran to mobilize proxy forces in Syria and Yemen, so much so that former Iranian MP and current mayor of Tehran Ali Reza Zakani once boasted that Iran controlled three Arab capitals with a fourth on the way (Beirut, Baghdad, Damascus and Sanaa). For different Arab countries, especially in the Gulf, this poses an existential threat to their regimes.

A third consideration is that Arab countries have felt abandoned by the United States as they have faced the spread of Iran’s regional influence. They are no longer convinced of the United States’ commitment to maintain the rules-based global order. Gone are the days when Washington dominated a unipolar international order. Today, countries such as China, Russia, and Iran are more openly challenging the United States. At the same time, the United States has declared its intention to pivot away from the Middle East and decrease its military footprint there, leading to a regional power scramble. This has pushed Arab states to reconsider their previous reliance on a US security umbrella and pursue their interests independently of Washington. One aspect of this approach has been to remain on good terms with all the major powers, since the United States, Russia, and China all provide safeguards against Iran’s rising sway.

In the Middle East, US disengagement has led regional and global powers to fill the subsequent void. This has included Russia and to a lesser extent China, but also regional countries such as the United Arab Emirates and Turkey, not to mention Israel. They have adopted an expansive interpretation of their own national security, thereby triggering, making more likely, or prolonging conflicts across the region. In Syria, Yemen, Libya, and Iraq, tens of thousands, if not hundreds of thousands, of people have been killed, and millions displaced, as different regional actors have sought to shape political outcomes to their advantage in countries often far from their borders.

Syria is one place where the impact of the war in Ukraine may be most directly visible in terms of regional calculations. What worries many Arab states is that the war in Ukraine could upend the precarious status quo in Syria. There have been concerns voiced recently, notably by King Abdullah of Jordan during a visit to Washington, that Russia may be withdrawing some of its forces from Syria to fight in Ukraine, and repositioning others inside Syria, allowing Iran to expand its footprint in some parts of the country. In southern Syria, where Russia had guaranteed stability starting in 2018, there is increasing instability today, with more regular attacks in border areas as well as targeted assassinations of former rebels in Deraa. In this context, both the Syrian regime and Iran have been keen to reassert the strength of their alliance, as Bashar al-Assad’s visit to Tehran on May 8 demonstrated. For Iran, it is about projecting power across the region as nuclear negotiations reach a climax in Vienna.

The prospect of an expanded Iranian deployment near the Golan Heights is also causing concern in Israel. If Russian-Israeli tensions increase, this may undermine Israel’s capacity to conduct air raids against Iranian and Hezbollah positions in Syria. Until now, Russia has generally avoided firing anti-aircraft missiles at Israeli aircrafts, which Israel has interpreted as an implicit green light to continue such attacks. However, Moscow is said to have allowed the recent use of such missiles against Israeli aircraft conducting a raid against Iranian and Syrian military positions. In time, this may alter the military equation in Syria. However, whether it will prompt Israel to modify its gradual tilt toward Ukraine in the war with Russia remains to be seen.

In this fraught environment, it is not surprising that many Arab countries have favored regional deescalation. This means continuing the process that began in 2020, when three Arab states—the UAE, Bahrain, and Morocco—formally agreed to diplomatic ties with Israel through what was collectively known as the Abraham Accords. US policy makers are also working to forge an agreement between Saudi Arabia and Israel. There have been other reconciliations as well, as Saudi Arabia, the UAE, Bahrain, and Egypt restored normal ties with Qatar in 2021, and as Turkey mended its relationships with Saudi Arabia, the UAE, and Israel in 2022.

Countries of the region have also taken note of Russia’s intimation that it might use tactical nuclear weapons in Ukraine, particularly in light of the negotiations with Iran over reviving the nuclear agreement. There are two sets of concerns for the Arab states. They worry that if the nuclear agreement is not revived and Iran builds a nuclear device, this could lead to a regional arms race. And they worry that if it is revived, the fact that it fails to address Iran’s regional activities would allow Tehran, which would benefit from an inflow of cash as sanctions are lifted, to reinforce its network of proxies throughout the Arab world.

Countries of the region are also exploiting the war in Ukraine to advance their political goals or impose favorable arrangements. Turkey, for example, has announced that it will launch a military operation to create a 30-kilometer safe zone along its border with Syria, something it was unable to do previously because of Russian mediation of a cease-fire and the prospects of European pushback. Even though it is uncertain whether Turkish President Recep Tayyip Erdogan will go ahead with his plan, his desire is to clear the border area of its Kurdish population, and of militants loyal to the Kurdistan Workers’ Party (PKK), and replace them with Syrian refugees currently residing in Turkey, whose presence has become a polarizing issue in Turkey. If this were to take place, and notwithstanding the significantly different border conditions, it would open the door for other countries, such as Lebanon, which is going through a major economic and financial collapse, to revive calls for the international community to help it establish a safe zone along its borders to which Syrian refugees could be moved.  Indeed, Lebanese policy makers have recently made such appeals including the country’s Prime Minister Najib Miqati.

Meanwhile, the UAE and Saudi Arabia have taken advantage of Western countries’ need for lower oil and gas prices to redesign their relationship with the United States. A high-level U.S. delegation traveled to the UAE to offer condolences after the death of its ruler, Sheikh Khalifa bin Zayed Al Nahyan. In July, US President Joseph R. Biden, Jr., will visit Saudi Arabia and meet with Crown Prince Mohammed bin Salman (MBS), something he had refused to do thus far because of the crown prince’s suspected involvement in the killing of Washington Post columnist Jamal Khashoggi. This comes after leaked news that MBS and the then de facto ruler of the UAE, Mohammed bin Zayed Al Nahyan, had both refused to take calls from Biden, who sought an increase in oil production to offset the global increase in oil prices because of supply shortages resulting from the boycott of Russian hydrocarbons. For its part, the UAE is seeking to negotiate better access to US intelligence and targeting capabilities to prevent future attacks by the Houthis in Yemen. It would also like Washington to redesignate the Houthis as a terrorist group.

What Arab governments will be especially careful to watch, however, is the economic impact of the Ukraine war on their own societies, particularly on the cost of food and basic commodities. The Ukraine war is having a detrimental effect globally on economic growth and will aggravate inflationary pressures. In the Middle East and North Africa, close to 80 percent of Tunisia, Lebanon, and Egypt’s wheat imports come from Ukraine and Russia, while energy prices have been soaring because of the cutoff of Russian oil and gas. Given the size of the vulnerable populations in the region, food crises are increasingly likely, with the concomitant impact this will have on social and, therefore, political stability. There is significant concern that the knock-on effects of rising global inflation may also lead to widespread protests. The Arab Gulf countries, for whom the increase in oil prices as a result of the Ukraine war has been a bonanza, had already taken action to address potential food security challenges. Most Arab Gulf countries implemented food security strategies in the aftermath of the 2008 financial crisis and others, such as the UAE, went as far as dedicating a ministry to food security. The financial gains from the increase in oil prices gives them an additional buffer. As a result, the socioeconomic impacts of the war in Ukraine in these countries continue to be muted for now.  In oil-importing countries such as Egypt, which is also facing a substantial economic crisis, the government has increased the number of beneficiaries of its cash transfer programs. For countries in conflict—Syria, Libya, and Yemen—or those facing economic collapse, such as Lebanon, fiscal solutions are simply not possible.

The road ahead is paved with major challenges. The impact of the Ukraine war on the Middle East and North Africa, and indeed globally, will very much depend on the conflict’s duration. If, as expected, it is protracted, this could have potentially catastrophic political and social repercussions for the Middle East.

Maha Yahya is the Director of the Malcom H Kerr Carnegie Middle East Center where her works focuses on political violence, identity politics and social justice.