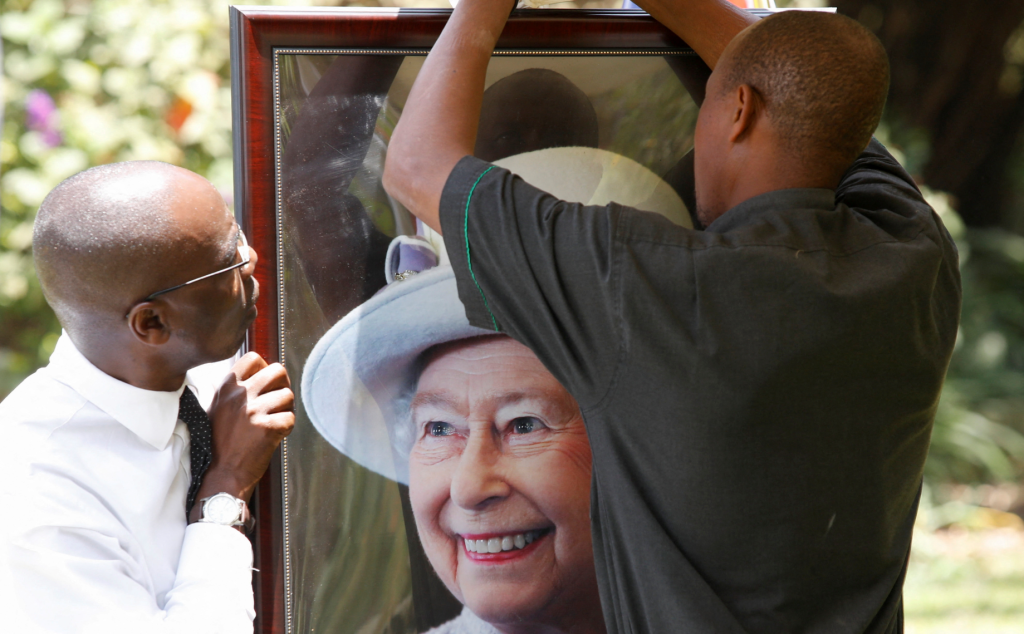 Africa’s relationship with the British monarchy is fraught with complications, not least being that the cornerstone of their modern affiliation, the Commonwealth, is rooted in a dark legacy of colonialism and empire.

Yet even against that historical backdrop, the late Queen Elizabeth II was respected by her peers across the continent, and upon the announcement of her death, tributes from African heads of state poured in.

How did a monarch that, for many, embodied empire and colonialism garner such tribute among people whose ancestors chafed against British rule? The Queen committed herself to fostering relationships with various African heads of state, an effort that sometimes required her to step outside the United Kingdom’s dominant political context of the time. And after seventy years on the throne, she was omnipresent as a symbol of continuity, comradery, and commonality across the Commonwealth.

The Queen, both as head of state or head of the Commonwealth to twenty-one African nations, took her duties seriously. She respected local customs, was comfortable operating in a post-colonial environment, and often went against the advice of the British political establishment when approaching issues on the continent.

Such an approach paid off.

Not only was the Queen respected by many African political figures, but she enabled the United Kingdom to make inroads where politicians were unable to do so. But can the Commonwealth’s relationship with Africa continue to thrive with its greatest asset gone?

The Queen’s relationship with Africa began at the very start of her reign: After all, she ascended the throne while in the foothills of Mt. Kenya in 1952. Her connection to the continent over the course of her reign would be long standing, but also one defined by a forced evolution as the United Kingdom left its ambitions for empire behind.

From her first visits to Africa as monarch, she would work to cement her credibility as a leader not only for the United Kingdom, but also for the Commonwealth. While reigning over a tumultuous shift in global geopolitics, she was able to juggle her responsibilities and effectively serve as a moral and figurative leader.

This is perhaps most evident in her 1961 visit to Ghana. The former colony had recently declared its independence and was debating leaving the Commonwealth; its founding father and president, avowed socialist Kwame Nkrumah, increased his hold on power and cozied up to the Soviets at the same time the Berlin Wall was being erected and the Cold War was getting into full swing.

British politicians were very much against the trip. Former Prime Minister Winston Churchill called the prime minister at the time, Harold Macmillan, in an attempt to lobby the government to cancel the Queen’s travel. The Queen was steadfast, however, and despite the pressure visited for twelve days.

The visit was an immense success.

Most famously, at a ball organized to celebrate the trip, the Queen shone in a way only she could. In the year that apartheid partitioned South Africa and the Freedom Riders took on segregation in the United States, the Queen danced with Nkrumah in front of the world media. The Queen was able to reassure Ghana’s political leadership on a personal level, one of her key skills as a monarch.

Nkrumah maintained his political differences with the West, but he chose to keep Ghana in the Commonwealth, allowing the West crucial access to counter Soviet influence in the region. But on a more concrete level, the Queen demonstrated that while the nations of the Commonwealth may have their political differences, they could remain united under her leadership; more than just an association of former British colonies, the Commonwealth could also be a community of independent nations working together for their mutual advancement.

Another example of the Queen’s strong moral determination and her sense of duty was her willingness to go against the British political establishment in the 1980s. It was an open secret that the Queen quarreled with then Prime Minister Margaret Thatcher over sanctioning the apartheid regime in South Africa. The Queen would go on to establish a close personal friendship with Nelson Mandela, the dissident who became the country’s first post-apartheid president. Not only were they known to call each other by their first names, but they also communicated regularly and famously danced together during his state visit to London.

Her willingness to advocate for the needs of Commonwealth nations, sometimes contradicting the home government’s positions, earned the Queen the respect she held among several important African leaders—relationships that were only enhanced by her seemingly singular ability to connect with leaders on a personal level.

In short, the Queen’s personality and her approach to cultivating people-to-people relationships with African leaders allowed the Commonwealth to remain relevant and even thrive at a time when it probably shouldn’t have.

However, despite the Queen’s ability to connect with Africa and (at least by the standards of the time) rebut the sometimes racist tendencies of Western attitudes toward the continent and its leaders, some Africans saw her, and continue to see her, as an emblem of a painful history of empire and colonialism. This viewpoint is one of the key challenges facing the future of the Commonwealth.

A legacy of colonialism

With the United Kingdom’s history of colonialism in Africa, it comes as little surprise that the Queen’s death brings complex emotions to the fore for many former colonial subjects. There is a history of brutal colonial oppression that many say has been overlooked.

For example, Nigerian Carnegie Mellon professor Uju Anya recently made headlines for her criticism of the Queen on Twitter, saying that Queen Elizabeth II “supervised a government that sponsored the genocide that massacred and displaced half my family” in reference to the UK government’s role in the Biafran War in the late 1960s.

This dichotomy is one with which the Commonwealth will continue to struggle. Queen Elizabeth II’s emphasis on strong interpersonal ties with African leaders helped smooth over relationships, but it didn’t address the past injustices endured by many African groups. Given that past injustices are no longer swept under the rug, the monarchy will need to address criticism of its historical actions and its representations if it hopes to maintain the Commonwealth’s relevance.

At a time when imperial legacy is a burden, not a boon, and the dark shadow of colonialism is no longer quietly brushed aside, it remains to be seen whether the Commonwealth will be able to flourish without its greatest asset and distraction from that historical truth: Queen Elizabeth II.

What’s next for King Charles III

The Commonwealth has historically served as a vital link for the United Kingdom, and by extension the West, to engage with Africa.

But to maintain that link, the Commonwealth needs to address its imperial legacy and work to solidify itself in a changed world.

King Charles III stands a good chance of managing that endeavor and for the past few years has stood in for his mother at many Commonwealth meetings. Those meetings have seen significant change. To the dislike of many of its detractors, the Commonwealth has not been relegated to the history books just yet—it is actually expanding.

Just earlier this year, Togo and Gabon were admitted to the club at the Commonwealth Heads of Government Meeting in Rwanda—a country that itself joined in 2009. The inclusion of two Francophone nations signifies how the Commonwealth is evolving and how crucial that evolution is for the organization’s future. They joined not because of historic connections to the British empire, but because of the cultural and commercial prowess of the Commonwealth. Charles III should harness these cultural and commercial ties to maintain the strong ties that currently exist across the continent and to foster new ones.

The Commonwealth is evolving into an organization based more exclusively on mutual interests and benefits. King Charles III, as head of the Commonwealth, will need to shepherd the organization through this transformation using similar methods as his mother: personal connections and an acceptance of each member’s political autonomy. He will also need to address the Commonwealth’s origins rooted in colonialism, but there are questions about whether he will even be able to do so.

The African continent is crucial to the Commonwealth’s continued success. Out of fifty-six Commonwealth members, twenty-one out of fifty-six member states are African. Plus, the continent is central to many of the United Kingdom’s economic interests abroad, as Africa is now home to the world’s youngest population and the largest free-trade zone by number of countries. And in the wake of Russia’s invasion of Ukraine and of increased Chinese interest across the continent, Africa’s role in geopolitics is growing—which will be of interest to the post-Brexit United Kingdom. Without ties to the European Union, the Commonwealth is increasingly important as a key mechanism for both the United Kingdom to remain a key player on the international stage and for the West’s attempts to engage with Africa.

The West and Africa’s historical ties, while not always something to be proud of, served as a foundation so that Queen Elizabeth II could build people-to-people ties and reset bilateral relations with African countries in a way that reflected the modern world. That desperately needs to continue. But in addition, King Charles III will need to address the very real grievances those historical ties represent.

Queen Elizabeth II’s reign saw her navigate a tumultuous shift in global geopolitics all while keeping a steady course. Hopefully, King Charles III is up to the challenge to do so as well. If he is, the Commonwealth will continue to flourish. If he isn’t, the West will have lost an invaluable tool to engage with a continent and group of nations that are now more important than ever.

Alexander Tripp is a program assistant for the Atlantic Council’s Africa Center.

Caitlin Mittrick is a young global professional at the Atlantic Council’s Africa Center and a graduate student at the George Washington University Elliott School of International Affairs. 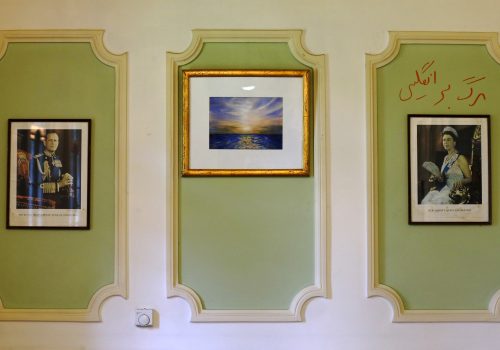 Britain is mourning Queen Elizabeth II. But for many Iranians, she was the ‘Queen of Coups.’

While Queen Elizabeth II did not play a direct role in British imperialism and actually reigned as the empire declined, Iranians inside and outside Iran will never forget the role Britain once played in exploiting their country’s wealth and controlling their destiny. 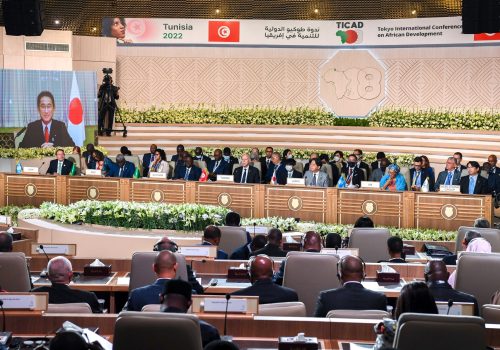 Japan’s opportunity to build a new legacy in Africa

The outcomes of TICAD8 in Tunis, attended by some 20 African heads of state and government, reflect the clear aim of Japan to differentiate itself from China. 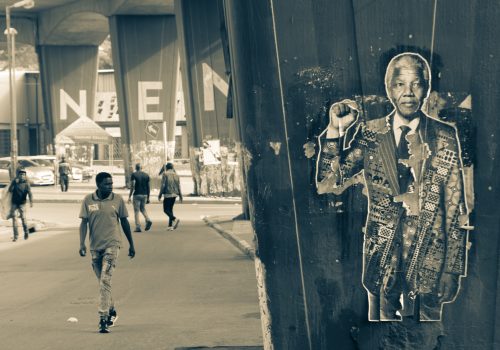 Mandela Day recognizes not only a great world leader, but also the value of African voices on the international stage.

Image: Workers prepare to hang for display a portrait photograph of Britain's Queen Elizabeth, before a live screening of her State Funeral, at the British High Commissioner's residence in Nairobi, Kenya September 19, 2022. REUTERS/Monicah Mwangi