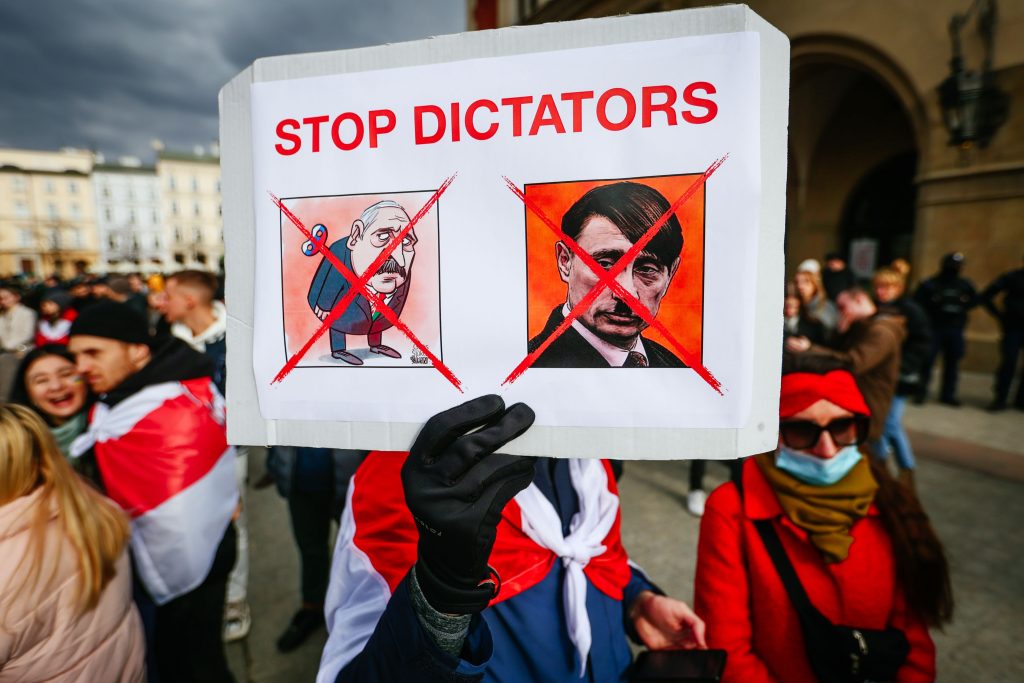 Ukrainian President Volodymyr Zelenskyy called a security meeting in Kyiv on June 16 to assess the risk of a possible renewed invasion of the country from Belarus. Zelenskyy raised the alarm following mounting evidence of a Belarusian military build-up close to the border with northern Ukraine.

The move highlighted continuing concerns in Kyiv over the threat posed by Putin’s closest ally, Belarusian dictator Alyaksandr Lukashenka. In his latest hint at a possible forthcoming military intervention, Lukashenka warned on June 17 that he may be forced to “defend” western Ukraine from Poland.

Menacing rhetoric of this nature is nothing new. Nor can it be written off as mere saber-rattling. When Putin launched his full-scale invasion of Ukraine on February 24, the main thrust of the attack came from Belarus toward Kyiv. Throughout the first month of the war, Belarus continued to serve as a launch pad for Russia’s ultimately failed attempt to seize the Ukrainian capital.

Members of the Belarusian opposition have long argued that the underwhelming international reaction to Lukashenka’s ruthless crackdown on the country’s 2020 pro-democracy protest movement was a dangerous mistake that has left Europe significantly less secure. They claim this inadequate response set the stage for Belarus’s current supporting role in Putin’s Ukraine War.

At the time, the Ukrainian authorities condemned Lukashenka’s brutal response to the protests and welcomed fleeing Belarusians. However, Kyiv also maintained economic ties with the regime and adopted a cautious approach towards exiled opposition leader Sviatlana Tsikhanouskaya.

There are indications that this strained relationship with the Belarusian opposition persists. In a recent interview with the independent Belarusian media, Ukrainian presidential advisor Mykhailo Podolyak claimed Ukraine did not understand Tsikhanouskaya’s position on Russia. He accused the Belarusian opposition leader of making “rather strange statements that, to put it mildly, were no different from the statements coming out of official Minsk and in some aspects were even more pro-Russian.”

Podolyak’s comments reflect lingering disquiet in Kyiv over Tsikhanouskaya’s initial attempts in 2020 to avoid criticism of the Kremlin in a bid to deter Putin from backing Lukashenka. His claims angered many Belarusians who accused Podolyak of ignoring the opposition leader’s more recent pro-Ukrainian statements. Since the invasion began in February, Tsikhanouskaya has spoken out frequently in support of Ukraine while attacking Russian aggression and condemning Lukashenka’s support for the war.

Tsikhanouskaya is one of many Belarusians who have demonstrated their opposition to the invasion of Ukraine. Despite the threat of severe penalties, hundreds of Belarusians used the occasion of a February 27 national referendum to protest the war in Ukraine. Throughout Europe, the Belarusian diaspora has mobilized to support Ukrainian refugees.

Meanwhile, hundreds of Belarusians have travelled to Ukraine to join the fight against Russian aggression, with Tsikhanouskaya recently estimating the overall number of volunteers at 1,500. The presence of so many Belarusians within the ranks of the Ukrainian military has drawn praise from Kyiv. For example, presidential advisor Oleksiy Arestovych called the Belarusian battalion one of the most effective units in the Ukrainian army and praised them as “examples of personal courage, bravery and military conduct.”

On the domestic front, significant numbers of Belarusians have joined an underground anti-war movement that has targeted the country’s rail network and is credited with significantly disrupting Russian military logistics moving through Belarus. This sabotage campaign proved so embarrassing for Lukashenka that he introduced changes to the country’s capital punishment legislation in May allowing the death penalty for railway partisans.

Ukraine’s mixed messaging on Belarus has created the impression that there is still some reluctance in Kyiv to cut all ties with Lukashenka despite his deep involvement in Putin’s invasion. However, attitudes may now be hardening. As the international community seeks solutions to the mounting global food crisis sparked by the Russian blockade of Ukraine’s Black Sea ports, Zelenskyy recently ruled out the possibility of sending Ukrainian grain to Baltic ports via Belarus. “We understand why we were offered this but we are not ready to help our “friendly” neighbors,” he noted sarcastically.

This was an encouraging step that suggests a more uncompromising stance toward Belarus. The international community must now maintain this pressure on the Belarusian authorities while supporting the country’s democratic opposition and imposing further costs on Lukashenka for aiding Putin’s war effort and engaging in domestic human rights abuses.

Lukashenka’s participation in the Russian invasion of Ukraine has underlined the security threat posed by the authoritarian regime in Minsk. Without a fundamental political transition in Belarus, the country will continue to provide support for Putin’s policies of imperial aggression and will remain a source of regional instability.

Image: A protester holds a placard during an anti-war protest in February 2022. (Photo by Filip Radwanski / SOPA Images/Sipa USA)