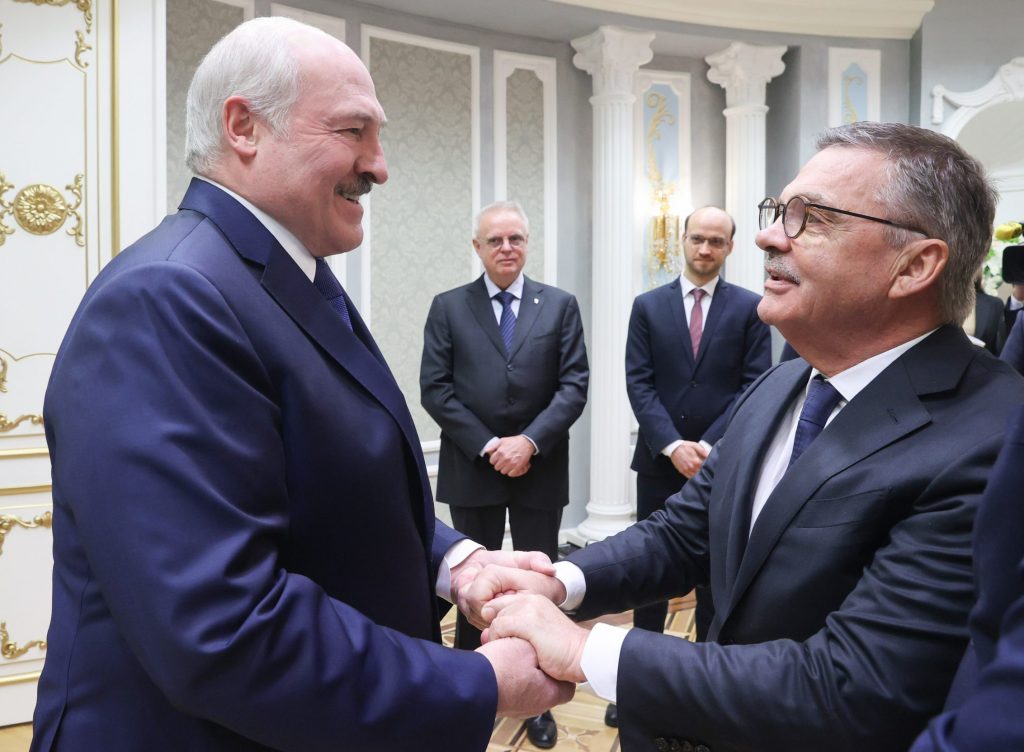 “Hello, my dear!” exclaimed Belarusian strongman Alyaksandr Lukashenka, rushing across the room to deliver a hug.

The man in the dictator’s embrace was not a fellow authoritarian ruler but Rene Fasel, the head of the International Ice Hockey Federation. Fasel was in Minsk on January 11 to deliver the news that Belarus would not be dropped as co-host of the 2021 IIHF Ice Hockey World Championship, and to discuss plans for co-hosting the prestige international event with Latvia.

With Lukashenka currently engaged in a bloody crackdown against pro-democracy protests across Belarus, the friendly tone of the meeting sparked widespread criticism. “It went a bit wrong, I have to say,” Fasel acknowledged two days later. “It is a bit embarrassing.”

Belarusian opposition leader Sviatlana Tsikhanouskaya was one of many to highlight the exact nature of this embarrassment. “Rene Fasel is meeting Lukashenka today,” she tweeted. “A few miles away from them, people are imprisoned in inhumane conditions as political prisoners.”

After being lambasted by the Belarusian opposition and facing protest from Latvia—the other host nation for the championship—Fasel said that this meeting should not be seen as a sign of support for Lukashenka’s regime. However, by taking this meeting and refusing to move the championship away from Belarus, the hockey chief has unwittingly joined a small club of those who are legitimizing Lukashenka’s crackdown on the international stage, including Russia, Iran, Kazakhstan, China, and North Korea.

“I wanted to use this special relationship with Lukashenka to do something good,” said Fasel. “So that the world championships could be a sort of reconciliation between government and opposition.”

It remains unclear how Fasel expects the May-June championship to help the Belarusian people reconcile with a regime that has beaten and arrested tens of thousands while reportedly subjecting hundreds to torture. After the bear-hug meeting, a petition organized by Belarusian hockey player Yulia Abasava against the IIHF’s recognition of Lukashenka jumped up to more than 50,000 signatures.

Despite regular protestations to the contrary, sport has never been separate from politics, and this year’s ice hockey championships are no different. In fact, ice hockey is integral to Lukashenka’s politics—the Belarusian Ice Hockey Association’s top officials have long belonged to the dictator’s inner circle. Before spending nearly a decade as Lukashenka’s minister of internal affairs, Uladzimir Navumau served as the organization’s chief.

At a time when the international community is seeking to put pressure on Lukashenka, who is recognized by both the European Union and the United States as having stolen the Belarusian presidential election in August 2020, the IIHF’s move gives the strongman a desperately needed lifeline of legitimacy. By the same token, removing Belarus as a co-host of the championship and moving the event away from Belarus would be a devastating blow to an increasingly illegitimate and violent regime.

Even if Fasel refuses to ditch Lukashenka, it is unlikely the championship will go smoothly. Since the current pro-democracy uprising first broke out in August 2020, the people of Belarus have shown a remarkable ability to find ever-more inventive ways of protesting against the regime. In the current climate, it is almost certain that they will use people power to disrupt games, block teams from traveling to arenas, and do everything possible to make sure the defining images of the championship are not of players on the ice but people in the streets.

Latvia is already leading the way in calling on Fasel and the IIHF to change course. Latvian officials are asking for permission to co-host the championship with another country. One of the key questions now is whether the other nations scheduled to participate in the championship will follow Latvia’s lead. Sweden, the Czech Republic, Switzerland, Slovakia, Denmark, Great Britain, Canada, Finland, the United States, Germany, Norway, Italy, and Kazakhstan may yet declare that if Lukashenka is their host, they will not take to the ice.

Opponents of the championship argue that making a stand in the sporting arena is just as important as other international efforts to end the brutal crackdown in Belarus. The sanctions passed by the international community have sent an important message to Lukashenka’s regime, but these measures will only do so much. Lukashenka’s international isolation must be total until he steps down and orders his forces to stop brutalizing the civilian population.

Perhaps unintentionally, Fasel hit the nail on the head during an interview on January 12. “We are not naive to think that hosting a world championship in Minsk will solve all problems in the country,” Fasel said. “But that does not mean we cannot explore whether the IIHF can use some degree of influence to initiate positive change in the country’s future.”

The IIHF has more influence here than it realizes—and perhaps wants to admit. One of the first things that comes to mind when looking back at the 1980 Moscow Olympics is the international boycott over the Soviet war in Afghanistan. Like it or not, the 2021 Ice Hockey World Championship now risks being remembered for all the wrong reasons.

Fasel may be trying to skate by without controversy, but he and the rest of the IIHF will be forced to pick a side regardless. Either they stay in Lukashenka’s embrace and keep Belarus as a host for the championship, or they side with the Belarusian people and the international community by recognizing that this privilege would only legitimize a violent authoritarian regime. It should not be a difficult decision.