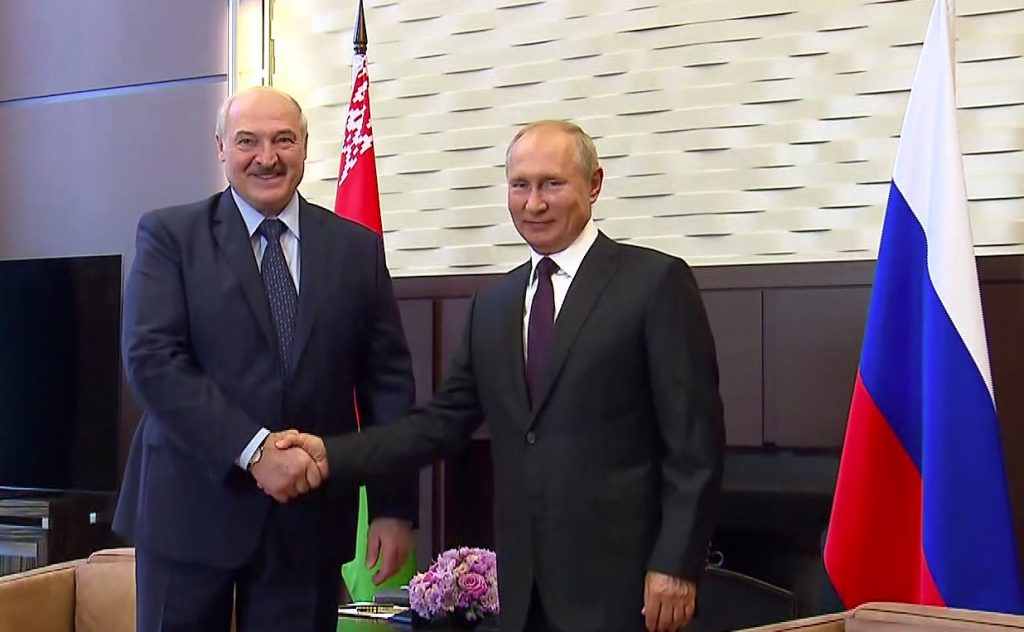 Over the past month, Vladimir Putin has succeeded in rescuing his fellow post-Soviet dictator Alyaksandr Lukashenka, but at what cost to the Kremlin?

Russia’s intervention in Belarus has produced some immediate dividends. It has managed to avert, or at least postpone, the collapse of the Lukashenka regime. Crucially, it has also prevented the nightmare scenario of an authoritarian ruler being toppled by people power on Moscow’s doorstep.

However, this intervention has now made Russia partially responsible for a brutal ongoing crackdown and the prolongation of a deeply discredited regime.

Kremlin support for the unpopular Lukashenka risks fueling anti-Russian sentiment in one of the few remaining countries where a clear majority still favors close ties with Moscow. In attempting to solve a short-term problem, has Putin created a far bigger long-term foreign policy headache?

Speaking on the eve of this week’s meeting between Putin and Lukashenka in Sochi, Nobel Prize-winning Belarusian writer Svetlana Alexievich warned that Moscow was playing with fire. “Russia might gain territory but it will lose its brothers,” she commented. “Belarusians have always considered Russians to be our brothers, but if Russia maintains its current politics, that will no longer be true.”

Other Belarusians have also begun offering similar predictions. The Coordination Council of the country’s pro-democracy opposition published an appeal on September 14 addressed to Russian officials and members of the public that stressed the opposition’s commitment to strong ties with Russia while warning of the potential for a “serious negative impact on bilateral relations” if Moscow continues to prop up Lukashenka.

Russia’s decisive role in the survival of the Lukashenka regime has injected a geopolitical aspect into Belarus’s pro-democracy protest movement that was previously absent. When protests first broke out on August 9 following the country’s flawed presidential election, opposition leaders were initially careful to avoid any mention whatsoever of foreign policy issues.

Speaking to members of the European Parliament via video link on August 25, opposition figurehead and presidential candidate Sviatlana Tsikhanouskaya spelled out the movement’s neutral stance. “The revolution in Belarus is not a geopolitical revolution,” she stated. “It is neither an anti-Russian nor a pro-Russian revolution. It is neither anti-EU nor pro-EU. It is a democratic revolution. The demand of Belarusians is simple: a free and fair election.”

These claims of neutrality failed to deter the Kremlin from entering the fray. Putin was among the first to publicly congratulate Lukashenka on his reelection. At Lukashenka’s request, the Russian leader then dispatched teams of propagandists from the Kremlin’s RT media holding to take over the running of Belarus state TV and “consult their Belarusian colleagues over various issues.” By late August, there was talk of an unprecedented Russian takeover of the mainstream Belarusian information space.

Kremlin support also extended to the security sphere. Speaking to Russian state TV on August 27, Putin announced that a reserve of Russian security forces had been formed and would be deployed to Belarus if the situation “gets out of hand.” In other words, Russia confirmed its readiness to use force if necessary in order to keep Lukashenka in power.

As Russian intervention has become increasingly obvious, geopolitics has inevitably begun to play a more prominent role in the protest movement. Anti-Kremlin messaging has appeared at rallies, along with the flags of various Western nations. “We will figure it out without Putin,” read one such banner. Illustrating this trend, the slogans of the last major protest in Minsk on September 13 included, “We will not let Lukashenka sell the country [to Russia].”

Amid talk of a creeping Russian takeover, many Belarusians feared the worst ahead of the September 14 meeting between Lukashenka and Putin in Sochi. However, while the summit produced some memorable grovelling and strikingly submissive body language that reflected Lukashenka’s dire predicament, he was not forced to openly trade Belarusian sovereignty in exchange for his own survival. Instead, Russia announced a USD 1.5 billion loan to Minsk that will allow Lukashenka to stay afloat economically for a few more months, while also reaffirming security commitments and outlining plans for monthly joint military drills throughout 2021.

The relative caution on display in Sochi may reflect an awareness in both Moscow and Minsk that any attempts to press on towards deeper integration are fraught with potential pitfalls. Officially, Russia and Belarus have been united in a so-called “Union State” since the 1990s. In practice, however, the exact nature of this partnership has remained open to interpretation. Lukashenka has proven more than capable of exploiting this ambiguity. Throughout the past two decades, the Belarusian leader has earned a degree of admiration for his ability to remain on close terms with the Kremlin while avoiding Moscow’s periodic demands to consummate the relationship.

This approach has broadly matched the mood in Belarus, where attitudes towards Russia are traditionally friendly. In addition to the strong historic, cultural, and social ties linking the two neighbors, Belarus is also heavily economically dependent on Russia, which has long served as the country’s dominant trading partner, energy supplier, and source of employment for thousands of Belarusian economic migrants.

Despite this good relationship, there has never been much evidence of strong public support in Belarus for deeper union with Russia. Indeed, when the Kremlin began increasing its demands for further integration in late 2019, Belarusians took to the streets to defend the country’s independence in protests that in many ways set the scene for the current nationwide pro-democracy movement.

The most recent available survey data confirms that only an insignificant portion of the Belarusian population wants their country to become part of Russia. Belarusians have clearly made their choice in favor of statehood and would be likely to resist any direct attempt to impose integration by force.

Moscow does not necessarily need to take over Belarus via a Crimea-style military annexation, of course. Some pundits have floated the prospect of a “soft annexation”, with the current regime remaining nominally in power while Russians gradually take control of the country’s economy, foreign policy, and security. In that regard, today’s weakened and pliant Lukashenka certainly offers numerous obvious advantages.

Moscow also has several very good domestic reasons for wanting to prevent any dramatic changes in Minsk. If Lukashenka fell and a democratic Belarus attempted to follow Ukraine out of the Kremlin orbit, it would be a huge blow to Putin’s prestige. More importantly, if Lukashenka were to be overthrown by a popular uprising, it could serve as inspiration for democratic forces within Russia itself.

Putin and his inner circle remain haunted by the collapse of Soviet power in the late 1980s and early 1990s, when the fall of the Berlin Wall set off a chain reaction that climaxed with the disintegration of the USSR itself. They will pay almost any price to avoid history repeating itself, and cannot allow Belarus to set such a dangerous example of people power so close to home.

With this in mind, it would seem that Putin has little option but to continue backing Lukashenka, at least until a suitable replacement can be found. Propping up the Lukashenka regime will address many of the Kremlin’s immediate concerns, and may also bring some concrete economic and security benefits. However, it risks poisoning Belarusian attitudes towards Russia for decades to come.

By backing an authoritarian leader who has lost all legitimacy in the eyes of millions of Belarusians, Putin is losing hearts and minds. This betrayal will not be easily forgotten. The events currently taking place in Belarus are imbued with historical significance, and Putin’s decision to stand with Lukashenka places him firmly on the wrong side of history. He is forcing Belarusians to equate Russia with their oppressor, and generating anti-Russian sentiment where none previously existed. Putin may view this as a tactical necessity, but it is also a grave strategic blunder.

Hanna Liubakova is a journalist from Belarus and non-resident fellow at the Atlantic Council. She tweets @HannaLiubakova.

Is Putin about to make a costly mistake in Belarus?

Vladimir Putin says Russian forces are in place and ready for deployment to Belarus to prop up dictator Alyaksandr Lukashenka – but direct intervention risks turning a generation of Belarusians into enemies.