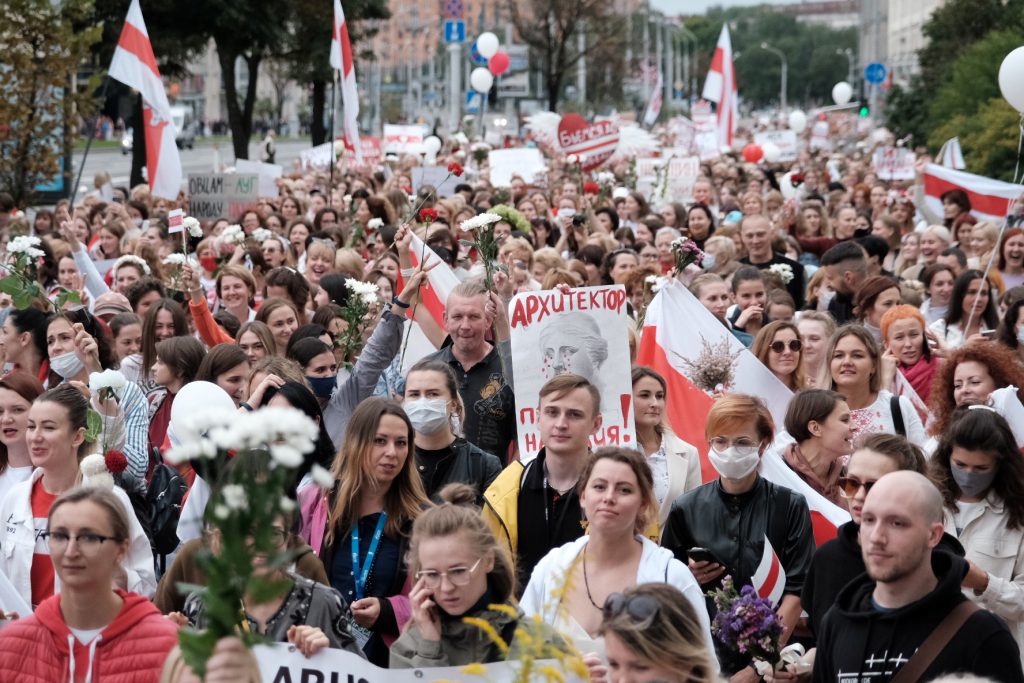 Is Vladimir Putin about to invade Belarus? This question has dominated geopolitical discussions ever since pro-democracy protests first broke out in the country three weeks ago following a deeply flawed Belarusian presidential election.

Putin himself has now provided the answer.

Speaking to Russian state TV on August 27, he announced that a reserve of Russian security forces had already been formed and would be deployed in Belarus if the situation “gets out of hand.” In other words, Putin is prepared to use force if necessary in order to prop up fellow dictator Alyaksandr Lukashenka.

Putin’s preparations to deploy the Russian security services are only part of the Kremlin’s ongoing intervention in neighboring Belarus. As protests expanded in the days following the August 9 presidential vote, Moscow reportedly sent planeloads of Russian TV workers to replace striking staff at Belarus state TV and lead the Lukashenka regime’s propaganda efforts. The impact of this apparent takeover is now all too evident in government messaging, with Belarusian officials including Lukashenka echoing Kremlin language and referring to pro-democracy protesters as paid foreign agents, social misfits, and Nazis.

Meanwhile, Russia is also providing Lukashenka with considerable diplomatic and economic backing. The Kremlin has called on the international community to refrain from any interference in Belarusian domestic affairs, while Moscow this week agreed to refinance a USD 1 billion debt to Russia. Behind the scenes, Russian government planes that are typically reserved for senior Kremlin officials have made numerous flights to Minsk since the crisis began, sparking speculation over high-level consultations and the involvement of Russian security advisers in the coordination of Lukashenka’s attempts to crack down on protests.

Putin’s increasingly open and uncompromising support for Lukashenka represents a potentially fatal blow to Belarus’s pro-democracy protest movement despite the best efforts of protest leaders to avoid offending the Kremlin. While on the campaign trail, opposition figurehead and presidential candidate Sviatlana Tsikhanouskaya repeatedly refused to comment on any geopolitical issues that might alarm Moscow or indicate an inclination to rethink Belarus’s close ties with Russia. Instead, she insisted that the opposition movement was solely concerned with ending the Lukashenka dictatorship and bringing democracy to Belarus.

Speaking to members of the European Parliament via video link on August 25, Tsikhanouskaya spelled out this neutral stance once more. “The revolution in Belarus is not a geopolitical revolution,” she stated. “It is neither an anti-Russian nor a pro-Russian revolution. It is neither anti-EU nor pro-EU. It is a democratic revolution. The demand of Belarusians is simple: a free and fair election.” Unfortunately for Tsikhanouskaya and the millions of Belarusians currently protesting against the 26-year Lukashenka dictatorship, this simple demand for democratic elections is exactly why Putin feels obliged to intervene.

Tsikhanouskaya has not been alone in arguing that Russia has nothing to fear from the uprising currently underway in Belarus. Much of the expert analysis over possible Kremlin intervention has focused on the many good reasons why a post-Lukashenka Belarus would be unlikely to turn away from Moscow. In addition to underlining Tsikhanouskaya’s point about the absence of any anti-Russian sentiment within the protest movement, most commentaries have stressed the numerous ties that bind the two countries together. Economically, Belarus and Russia are deeply integrated in ways that would require years of painful readjustments to untangle. Socially and culturally, Belarus is arguably the closest to Russia of all the former Soviet republics.

These observations are technically correct but they underestimate the authoritarian instincts that shape foreign policy in Putin’s Russia. The Kremlin’s main concern is not whether a new Belarusian government would maintain the country’s membership of the Moscow-led Eurasian Union or continue to refine Russian oil bound for European markets. Instead, Putin’s overriding priority is to prevent democracy from securing a new foothold in what he sees as the Russian imperial heartlands of the former Soviet Union. The idea of the Lukashenka dictatorship giving way to democratic government in Belarus is bad enough; the prospect of this taking place via a people power revolution on the streets of Minsk is quite literally the Kremlin’s worst nightmare and must be avoided at all costs.

Putin’s fear of people power dates back to his formative years as a KGB officer stationed in East Germany during the Cold War. As a first-hand witness to the early stages of the Soviet collapse in Central Europe, he would later recount his horror at the Kremlin’s inaction. When the young Putin sought reinforcements to counter growing anti-Soviet protests in Dresden in December 1989, he was famously told, “Moscow is silent.” Throughout his 20-year reign, Putin has made sure Moscow would never be silent again. Quite the opposite, in fact. The Russian ruler has become a champion of beleaguered despots around the world, and nowhere more so than in his own geopolitical backyard.

This aversion to democracy is also rooted in pragmatic self-interest. For all the talk of stratospheric approval ratings, Putin knows that his regime ultimately depends on force. The Putinist model would not survive in a truly competitive political environment, which is why Russian elections are routinely rigged, genuine opposition parties are forbidden, and the country’s mainstream media is ruthlessly policed. These precautions reveal the truth behind the Kremlin’s claims of public support. After all, a popular president who rules by consent does not need to assemble a vast police state and silence all opponents.

With the domestic political climate firmly under the Kremlin’s control, the greatest threat to Putin’s regime comes from Russia’s post-Soviet neighbors. This was the key motivating factor behind Moscow’s 2014 decision to intervene militarily in Ukraine, and it is the reason why Putin has now given his full backing to Lukashenka in Belarus. As fellow Slavic nations that are viewed by many Russians as virtually indistinguishable from their own country, both Ukraine and Belarus have huge potential to spark pro-democracy movements within Russia.

The Kremlin is under no illusions regarding the unpopularity of the deeply discredited Lukashenka regime, but Belarus simply cannot be permitted to become a democratic success story that might inspire calls for similar change inside Russia itself. There can be no repeat of the domino effect that began in Berlin in 1989 and led rapidly to the disintegration of the entire USSR.

With the future of his regime at stake, it should not surprise anyone that Putin has opted to back Lukashanka to the hilt. Nevertheless, this approach carries huge risks of its own for the Kremlin. In many ways, the Belarus protest movement has placed Putin in the geopolitical equivalent of a chess “zugzwang”, where any possible next move will worsen his position.

By announcing his readiness to use force in support of Lukashenka, Putin is aligning himself in opposition to the millions of Belarusians who view the dictator as illegitimate. This could turn Moscow’s closest ally into an adversary and force Belarusians to reconsider their previously positive attitudes towards Russia, much as Russian aggression since 2014 has led Ukrainians to reject closer ties with Moscow in favor of Euro-Atlantic integration. Putin’s fear of democracy has already brought Russian influence in Ukraine to its lowest ebb for hundreds of years. Will he now make the same mistake in Belarus?

In the short-term, Putin’s intervention will probably enable Lukashenka to cling onto power. However, the Belarus dictator is now sitting on a throne of Russian bayonets. As Putin’s predecessor Boris Yeltsin once observed, it is difficult to sit on such a throne for long. Instead, Moscow’s current measures to prop up Lukashenka are likely to be the first stage in an evolving Russian response to events in Belarus.

Belarusian society has undergone a democratic awakening of historic proportions in recent months. There can be no return to the old status quo. This is as evident in Moscow as it is in Minsk. Looking ahead, the Kremlin would probably be happy to sacrifice the odious Lukashenka as long as it can play kingmaker in a managed transition.

Above all, there must be no people power triumph. This means containing the current protest movement and robbing it of momentum, with Russian boots on the ground if necessary to get the job done. Only then can the search for an agreeable political settlement begin.

Russia’s intervention in Belarus is already underway and has the potential to escalate dramatically. In the combustible atmosphere of Belarus’s pro-democracy protests, Moscow may soon find itself forced to step in and play the unwelcome role of oppressor. This would have disastrous consequences for Russian interests in Belarus and beyond, but as far as Putin is concerned, it is a price worth paying if it prevents another democratic advance on his doorstep.

Peter Dickinson is the Editor of the the Atlantic Council’s UkraineAlert Service.