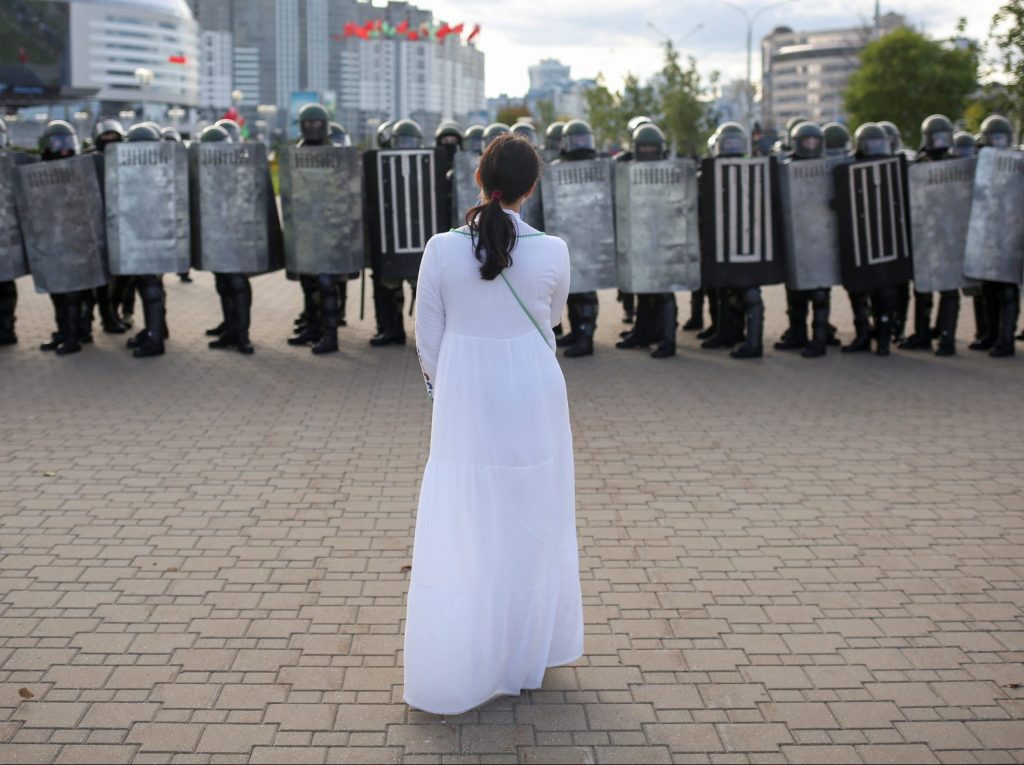 On August 9, Belarusian dictator Alyaksandr Lukashenka stole the country’s presidential election and began violently repressing an unprecedented wave of nationwide pro-democracy protests. So far, only the three Baltic states have imposed sanctions on thirty Belarusian officials in response to these offenses. Fortunately, the European Union and the United States are signaling that they will impose more sanctions very soon. However, the limited scale of these sanctions may undermine their effectiveness.

The principle aim of Belarus-related sanctions should be to punish those directly responsible for vote-rigging and repressive measures in order to discourage others from following such orders. A second aim should be to deter both Belarusians and Russians from assisting the Lukashenka regime in its ongoing crackdown against the country’s pro-democracy movement. The Belarusian people have demonstrated remarkable bravery. They require our support.

The fundamental principle that came out of the Nuremberg trial against Nazi war criminals following World War II was the idea that it is insufficient for defendants to claim they were merely following orders. Instead, it was established that everyone has a duty to disobey manifestly unlawful orders. This principle should now be applied to Lukashenka loyalists in Belarus.

The current expectation is that the EU will sanction 40 officials, while the United States will add at least seven officials to existing sanctions lists. Neither the EU nor the US is thought to be considering sanctioning any more enterprises.

Traditionally, the EU has sanctioned many more people lower down in the government hierarchy than the United States. Until 2016, Brussels had no less than 170 Belarusian officials on its sanctions list. Considering the recent evidence of torture against protesters and other terror tactics, this broader approach seems entirely justified. Many believe it should continue. My Belarusian colleague Franak Viačorka argues that “instead of targeting a few dozen officials, Brussels should be looking to add hundreds of names to sanctions lists.”

Travel bans and asset freezes certainly make sense. The wealthiest Belarusian officials travel freely throughout the Western world, and many of those lower down the hierarchy enjoy holidays in nearby EU resorts like Jurmala in Latvia or Palanga in Lithuania. The imposition of personal sanctions will deter others within the Lukashenka regime from engaging in the kind of lawless violence witnessed in recent weeks.

Luckily, neither the European Union nor the United States is currently believed to be considering the sanctioning of any additional Belarusian enterprises. Unfortunately, the United States already sanctions nine major Belarusian companies including Belneftekhim (the Belarusian state oil and chemical concern), the Grodno Azot fertilizer factory, and the Naftan oil refinery. These sanctions were imposed after Russian businessmen acquired parts of the targeted companies.

Today, sanctions of this kind against Belarusian enterprises make little sense. Indeed, they would be likely to prove counter-productive.

The enterprises in question are among Belarus’s main exporters to the West. By sanctioning them, the EU and US would risk isolating Belarus further from the Western world and making it even more dependent on Russia, which already accounts for more than half of the country’s foreign trade.

The real culprits that would be more deserving of sanctions are the Russian companies that have acquired shares in large Belarusian enterprises or intend to do so. Gazprom took over the Belarusian transit gas pipeline in stages from 2007 until 2011 and renamed it Gazprom Transgaz Belarus (which is not currently subject to sanctions).

Slavneft, a subsidiary of state-owned Rosneft, acquired a large minority share in Naftan oil refinery in 2011. Rosneft appears to be eyeing Mozyr, the other big Belarusian oil refinery.

Russian privately-owned Uralkhem, mainly owned by Russian citizen Dmitri Mazepin, is focusing on Grodno Azot, while related Uralkali, one-fifth owned by Mazepin, has been trying to acquire Belaruskali for a decade. These are the companies and people who should be threatened with sanctions if they try to use Russian state power to seize Belarusian companies.

Rosneft’s CEO Igor Sechin has been sanctioned by the United States since July 2014 as part of Ukraine-related sanctions. The United States should also consider sanctioning the chairman of the supervisory board of Rosneft and Putin’s main representative in Europe, former German Chancellor Gerhard Schroeder, who is also the chairman of the shareholder’s committee of the Kremlin’s Nord Stream 1 and 2 pipeline projects.

In the same way as the West is about to sanction the enforcers of Lukashenka’s violent crackdown, it should identify and sanction his Russian collaborators. Russia’s disinformation agents from RT and other state media are already known and should be sanctioned.

Flight records between Moscow and Minsk indicate that Russian security advisers and senior Kremlin personnel have also been involved in coordinating the suppression of the pro-democracy opposition in Belarus. The EU and US sanctions response to the crisis in Belarus should also reflect this.

The international community is well aware of the human rights abuses and other crimes currently taking place in Belarus. It is high time for the United States and the European Union to impose broad sanctions that target the real culprits from both Belarus and Russia.

Image: A Belarusian protester stands in front of law enforcement officers during a pro-democracy rally in Minsk on September 13. (Tut.By via REUTERS)