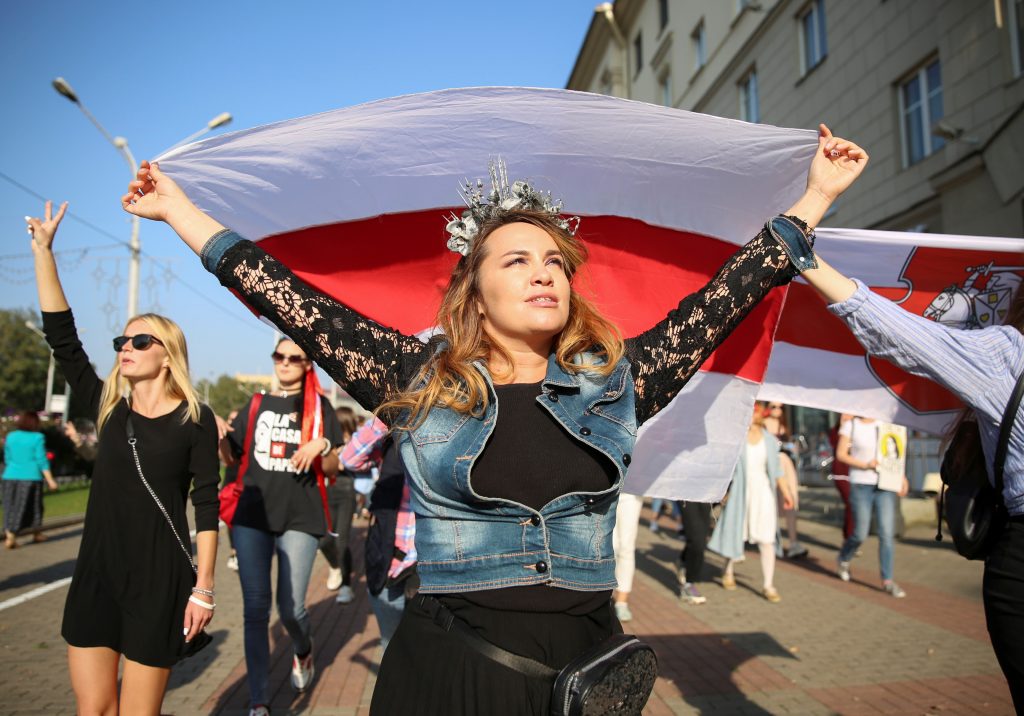 On October 2, the European Union finally adopted sanctions against 40 Belarusians in response to the falsification of the country’s August 9 presidential election. The same day, the United States expanded its existing sanctions on Belarus from 16 people to 24 people. Three days earlier, the United Kingdom had sanctioned eight Belarusians and Canada eleven. None of these countries recognizes beleaguered dictator Alyaksandr Lukashenka as the legitimate president of Belarus.

As the EU puts it, the Belarusians targeted by sanctions were “identified as responsible for repression and intimidation against peaceful demonstrators, opposition members, and journalists in the wake of the 2020 presidential election in Belarus, as well as for misconduct of the electoral process.” The sanctions imposed include travel bans and asset freezes.

The contentious early August vote in Belarus was not the first time that Lukashenka had falsified a presidential election or punished protesters with violence and arrests. He did so quite crudely in both 2006 and 2010. In 2006, the United States and the EU imposed sanctions.

Since then, the United States has maintained sanctions against sixteen individuals and nine major Belarusian enterprises. In 2016, after Lukashenka had freed all political prisoners, the EU ended sanctions that had targeted many more people, with the list including no less than 170 individuals.

Following the relaxation of EU sanctions in 2016, international financial institutions including the International Monetary Fund, the World Bank, and the European Bank for Reconstruction and Development returned to Belarus. However, the IMF has not yet been able to provide any financing.

The difference between the sanctions imposed by the United States and the EU is significant but not untypical. The United States tends to be tougher but typically targets fewer people. It has persistently sanctioned Lukashenka himself, which the UK and Canada have now also done, while the EU has chosen to exclude him from sanctions.

Instead, the EU tends to cast its sanctions net wider, sticking to the principle established during the post-WWII Nuremberg trials that no official must obey unlawful orders. Similarly, the EU has sanctioned many more people than the United States in response to Russian military aggression in Ukraine’s Crimea and Donbas regions, but it has not sanctioned several of the top Kremlin officials who have been targeted by the United States.

The new sanctions against Belarus have been very slow in coming.

The main reason for this delay was the disruptive role played by Cyprus, which vetoed the proposed measures because it wanted to see parallel EU sanctions imposed against Turkey for entirely separate reasons. The other 26 members of the EU were unable to overrule Cyprus until October 2, when Cypriot officials finally agreed to a compromise. Meanwhile, the United States, the UK, and Canada coordinated their sanctions but did not want to precede the European Union, so the overall introduction of sanctions was held up.

The delays and internal obstacles that have marred the introduction of Western sanctions against Belarus represent a step backwards from the collective response to Russian aggression in Ukraine. In the case of Ukraine, the United States and the EU acted in nearly full accord and very rapidly. In contrast, the new Belarus sanctions lists do not appear to have been coordinated, while action has been tardy. This reflects the relative weakening of transatlantic confidence and cooperation during the Trump administration.

While the EU and US have dithered over Belarus sanctions, the three Baltic countries have stood out as pioneers. They have listened carefully to Belarusian civil society activists, who have called for numerous human right violators to be punished.

These sanctions might prove quite painful because many members of the Belarusian upper middle classes have summer houses in nearby Baltic seaside resorts, notably Jurmala in Latvia and Palanga in Lithuania. Belarus has responded with counter-sanctions against 300 Baltic officials.

In general, one key difference between the latest international sanctions compared to previous measures is that they have not been directed against Belarusian companies. This is because any such moves would only make Belarus even more dependent on Russia economically. It is therefore assumed that no such sanctions are likely. There have been informal discussions that any Russian companies seeking to exploit Belarus’s current economic hardship to pick up Belarusian assets may be sanctioned, but so far nothing has been stated officially.

The Baltic states have probably shown the way forward in case of further sanctions, with more officials lower down in the Belarusian hierarchy likely to be the targets of any additional measures. In line with the approach adopted towards Ukraine-related sanctions, Russian enablers of the Lukashenka regime could also be targeted.

The most obvious Russian targets of Belarus-related sanctions measures would be Kremlin disinformation specialists who, under the leadership of Margarita Simonyan, have taken on a prominent role at Belarusian state television.

At one point early in the crisis, Simonyan even called for Russia to send “polite people” to Belarus, meaning special forces similar to the Russian troops without identifying insignia deployed during the seizure of Crimea. Such bravado alone would have been sufficient to incur sanctions during the initial stages of Russia’s aggression against Ukraine.

Overall, the West has been slow and somewhat disjointed in its Belarus sanctions. However, in the end, it has acted sensibly and with a reasonable degree of unity.