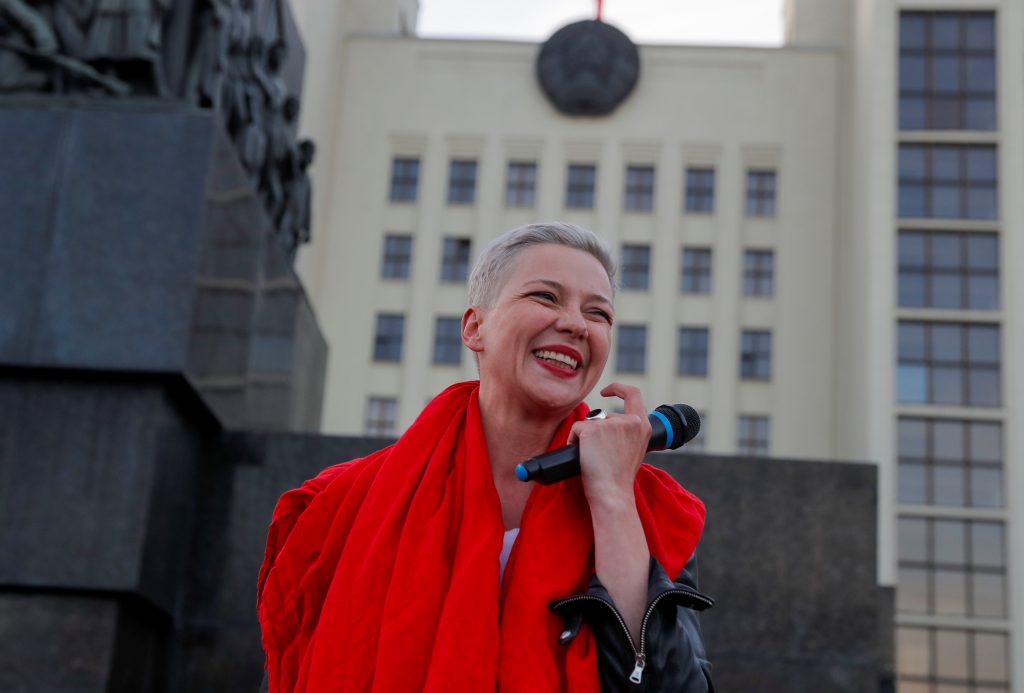 On August 9, Belarus held a presidential election that was marred by fraud. According to the official results, Alyaksandr Lukashenka won with 80 percent, although the EU and United States do not recognize the results. Fearing for the safety of her children, the likely winner, Svyatlana Tsikhanouskaya, fled to Lithuania. Tsikhanouskaya ran for president flanked by Maria Kalesnikava and Veranika Tsapkala. On August 22, we spoke to Belarusian opposition leader Maria Kalesnikava. The interview has been shortened and edited for clarity.

1. How did you, Svyatlana Tsikhanouskaya, and Veranika Tsapkala decide to form a trio? How long have you known each other?

We had one goal. And [banker and 2020 presidential candidate] Viktar Babaryka’s headquarters initiated the process. If Babryka was not registered, one of our plans was to unify with the strongest candidate. And Tsikhanouskaya was that candidate. Three women, as leaders, were mechanical results. I was the face of the Babaryka campaign, and Veranika Tsapkala was the representative of her husband Valery. It happened by accident.

2. I know you aren’t new to politics, but in the past, you were an organizer. Why did you decide to enter politics yourself? Do you want to serve in government, or is your time in politics temporary?

It’s a tough question because three months ago I would say no. Now many people call me a politician, but I don’t feel a politician myself. I feel enormous pressure for the role I am playing right now. It’s a huge responsibility, because I know I can change the future of Belarus to better. I will do my best. And it’s normal for everyone despite if he or she is a politician or not. But I don’t intend to be in government, not today, definitely.

3. Does the opposition movement have a leader? Are you it?

There is no one leader. We see the unique process: decentralized resistance of Belarus, on all level, and nationwide, in small and big cities, in downtown and outskirts, this happened to medics, factory workers, artists. This is a protest of all those who disagree. It spreads vertically and horizontally. Everywhere. It’s utopia to think that it’s possible to manage such a protest. The decentralized character of such a protest allows these rallies to broaden and have such a scale and penetrate the very depth of Belarusian society. I don’t see a big problem here. We are often criticized that we do not take responsibility as leaders and do not try to organize. But I see it as our power and power of solidarity. It’s hard to say if I feel a leader. I understand that people listen to me, and I feel responsible for my words and actions. I am not a political leader. I am a leader of the solidarity and unification of Belarus for a better future. I don’t see myself as a political leader.

4. What do you think of Vladimir Putin? Is he a thug or strategic partner?

Our goal is to build partnerships with all neighboring countries, including Russia, the EU, and the United States. Right now, during the current political crisis, we need dialogue, with all sides involved. I don’t think I am ready for any negotiations with Putin specifically.

5. Do you want help from the West? If so, what specifically?

I already feel strong support from the West. Same as many Belarusians. The international community should not stand aside. The statement of the European Council about the non-recognition of election results is good. We don’t recognize them either. So I feel this statement is made in solidarity. For the first time, Belarusians decided to take responsibility and take things under their own control. Protests are an example. They don’t stop for two weeks already. It’s very important to us—the dialogue. We don’t know how we can begin the conversation with each other. If our European partners can help us build instruments for negotiations and power transfer, it would help us a lot. But these things are hard to predict or to ask. We would be thankful to get such help.

6. You have said quite clearly that you aren’t leaving Minsk. Have you been to jail before? Are you scared of being jailed or tortured? Do you have a husband or children that they can use as leverage over you?

They don’t have such instruments of pressure, as they have against Svyatlana or Veranika, that can force me to move somewhere or record video statements. I am confident that I have to stay in Belarus. The question if I am afraid or not: it’s awkward and weird. All people are worried. Of course, I want to remain free. I really value my personal freedom. It’s essential to be free, but I don’t have an illusion. I know what was happening in Belarus for 26 years. I know what the possible level of aggression of violence used by authorities is. Since I have skills and enough power, I will be resisting that.

Probably a new generation emerged who see their future differently. If we imagine those who were born in 2000, they are not afraid. They don’t remember 2010. They don’t have a fear that someone can use violence against them. For ten years, there was not such violence as in 2010. But this year, authorities did use unprecedented violence against peaceful protesters. They used arms, grenades, and water cannons against people. They did on purpose to frighten the majority. But they were wrong. Because the level of violence convinced more people that you shouldn’t give up and have to resist to the end. Otherwise, we will face the same horrors as 7,000 people who suffered during the last days.

8. I know you’re a concert flutist. Do you see any links between music and politics? Did your background in music help prepare you for work in politics?

Very cool question. Of course, it’s an illusion that art, culture, and music are not connected with politics. Of course, they are connected—no artists can realize him or herself in a system of unfreedom or censorship. Belarus is the country where no concert even classical music can be conducted without the permission of some particular institution. We should clearly understand that. But it’s a very small number of people who connect an authoritarian system with a deficient level of their life and low salaries. It was in Soviet times, and it’s the same now.

For me these links are very evident. My life experience in Germany convinced me that the state, politics, and culture are interconnected. Europe has all mechanisms when creative people can impact the decisions of politicians. In Belarus, it is just beginning.

9. When I look at pictures of you, Veranika, and Svyatlana, I see you smiling and using sign language to convey love and peace. What do people make of these gestures?

I think that from the very first days when we chose the language of communication to people, we decided to appeal to mutual respect and personal dignity. All signs are non-verbal signs that help to build contact between people. These signs help to build respect between people. For the last 26 years, authorities showed disrespect, humiliation, and intimidation to people in different positions. During COVID-19 and the president’s attitude toward COVID-19 victims, it was the most critical moment. People realized that he really hates his own people.

Anger, violence—it works for a very short term. Self-esteem, respect, love [is] something eternal. Symbols work as symbols. But the basis is our respect for each other. When we see a thousand people on the streets, we give hugs, smiles, and are happy to see each other. And people who come to his [Lukashenka’s] rallies, they don’t have anything besides anger and hatred.