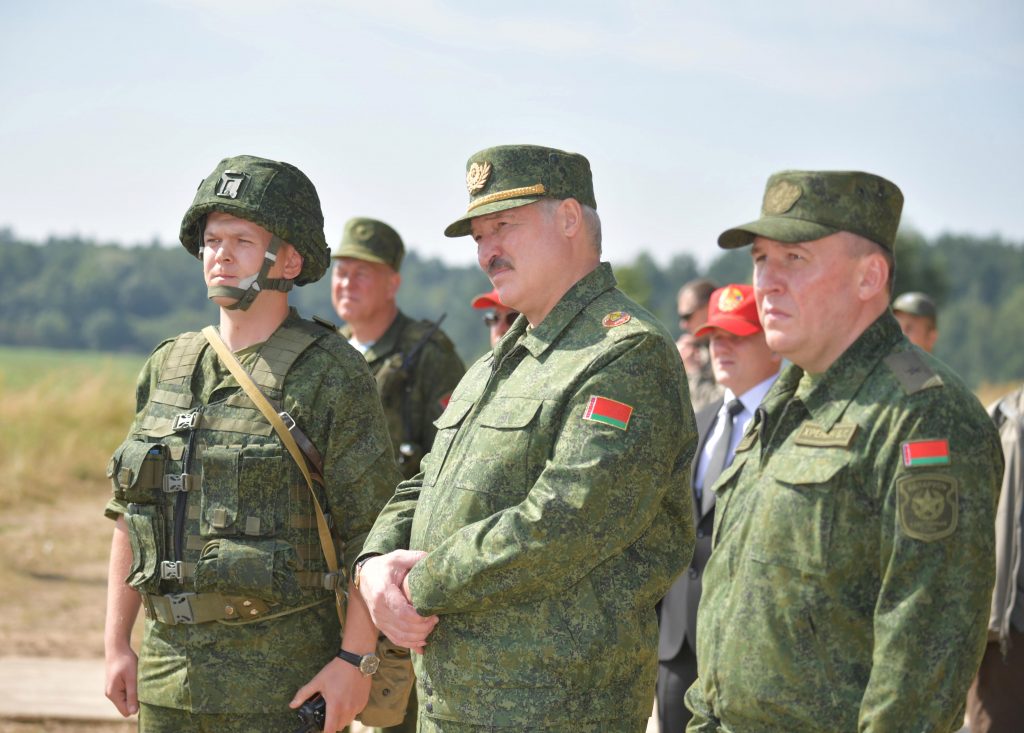 After two weeks of unprecedented anti-regime protests in Belarus, the situation remains finely poised. The crisis was sparked by government attempts to rig the country’s August 9 presidential election, leading to a massive outpouring of public anger. After initial attempts to silence the opposition via a brutal crackdown backfired, The government of dictator Alyaksandr Lukashenka appeared overwhelmed and in danger of crumbling. However, Lukashenka has since been buoyed by strong support from the Kremlin, while a lack of political leadership has left the protests struggling to move beyond the stage of street-level mobilization.

Nobody knows what will come next. The protest movement appears to enjoy overwhelming public support, while Lukashenka is widely regarded as illegitimate. Nevertheless, the man often referred to as “Europe’s last dictator” remains defiant and is threatening to launch a counter-offensive against protesters during the coming week.

In recent days, Lukashenka has also begun to hint at a military solution to the crisis. He has appeared in combat uniform on a number of occasions while ordering the army onto “high alert” and warning of efforts by foreign powers to topple his regime.

With no apparent middle ground between Belarus’s pro-democracy protest movement and the country’s deeply entrenched dictator, a compromise solution to the crisis looks to be out of the question. Instead, the role of the military could prove decisive during the coming days and weeks of the confrontation. Can Lukashenka rely on the loyalty of the army, or will members of the Belarusian military defect and join the popular revolt against the regime?

All states require the support of the security forces to maintain power. As Max Weber lectured 101 years ago, the state is ultimately defined by its “monopoly on the legitimate use of physical force,” while the defection of security forces remains one of the most important preconditions for revolutionary success. Maria J. Stephan and Erica Chenoweth’s seminal study of the ways civil resistance movements succeed determined that “security force defections make nonviolent campaigns forty-six times more likely to succeed than nonviolent campaigns where defections do not occur.”

In Belarus, there have already been some viral moments since protests began two weeks ago that show defections from the security apparatus: a police officer whose resignation post on Instagram has received nearly 400,000 likes; images from western Belarus where a police officer handed flowers to protesters; and a slew of videos of former members of the Belarusian military throwing away their uniforms.

However, while these moments have garnered a lot of attention in Belarus and internationally, it would be foolish to say they outweigh the widespread detention and violent suppression of protesters at the hands of the police. Additionally, Lukashenka retains the support of the Minister of Defense, who, when speaking to the heads of the various branches of the military in recent days, emphasized the regime line that the election was legitimate. As the tally stands, the coercive apparatus remains with the regime.

But that doesn’t mean widespread defections won’t happen. Looking to past studies of security force defection during revolutions can help indicate whether the conditions are favorable for Belarus.

First, are the protests peaceful? There are a number of ways in which nonviolent opposition campaigns have shown themselves more effective in creating change than their violent counterparts. A nonviolent approach can make the opposition more resilient to regime violence, as solidarity for their cause grows in backlash to the disproportionate use of force by the state. This approach also increases the likelihood of support from abroad.

A nonviolent protest movement can enable negotiations and make loyalty shifts among security forces more likely. In Belarus thus far, the protests have remained overwhelmingly peaceful. Even as around 7,000 people have been detained in often shocking conditions and subjected to torture, protesters on the street have largely refrained from escalating the situation with reprisals.

A second key issue is whether reserve units have been brought in to help with policing. Military units which do not usually count police work among their primary roles have an increased susceptibility to the stressful environment of mass revolutionary protests because they lack the training and experience to deal with large crowds. When protesters number in the tens or hundreds of thousands, any lack of ability or willingness to repress them through violence is magnified. Additionally, domestic deployment of reserve units is a tacit acknowledgment that the regime is at risk, which can sow uncertainty in the very forces being brought in as reinforcements.

In Belarus, the military has not yet been directly deployed to help control protests, but there have been some indications they could become involved. The country has a particularly nasty police force, but the Belarusian military does not have a background in domestic repression. Will troops who have been trained to protect their country from foreign foes be willing to fight against their countrymen in order to preserve an unpopular regime? As one former Belarusian soldier who recently filmed himself throwing away his uniform explained, “I decided to publicly discard the uniform I once valued and was proud of so that active servicemen think about who they are loyal to and who they should protect.”

A third factor is whether interactions between the security forces and protesters are intensifying. Security forces often make the critical decision to defect or remain loyal at intense, high-stakes moments. All indications point to an expansion of anti-regime mobilization in the country, with huge rallies taking place nationwide on August 23 for the second successive weekend. If this continues and Lukashenka’s sense of insecurity rises, it becomes more and more likely that the military will be deployed to help quell the opposition.

The fourth and final issue is how junior and mid-level officers of reserve units respond to the pressures they face. Units that are not typically used for police work have an increased susceptibility to the extraordinary environment created by mass revolutionary protests. Any junior or mid-level officer who finds himself on the street with orders to violently repress an ocean of familiar faces will find themselves gaming out the ethical ramifications, both moral and legal, of their next step.

Within the vast Belarusian security apparatus, it is these individuals who will feel the intensity of the moment most acutely. How these officers respond is critical to determining whether the security forces defect or remain loyal, even when the regime enjoys the support of the country’s military leadership and the broader security apparatus. If the junior and mid-level officers who head operational units decide to stand down or to defect, it can cause a cascade of similar decisions throughout the entire security apparatus.

This domino effect is likely because at the moment when the critical decision to defect or remain loyal must be made, most security personnel tend towards whatever decision leaves them in coordination with their peers. If some units begin to mutiny, then it becomes increasingly likely that others will follow. Officers understand that the consequences they will personally face depend primarily on what they do in relation to their peers.

Of the four indicators outlined here, this final one is nearly impossible to gauge without the benefit of hindsight. Information flows during a mass uprising are imperfect, and there is no way of predicting in advance how each individual officer and unit will behave. One thing we do know is that the stakes could hardly be higher. If the military is deployed against protesters, the conduct of individual officers is likely to determine the fate of the Lukashenka regime and the future of the entire country.

Keith Jones is Assistant Director of Corporate Relations at the Atlantic Council.