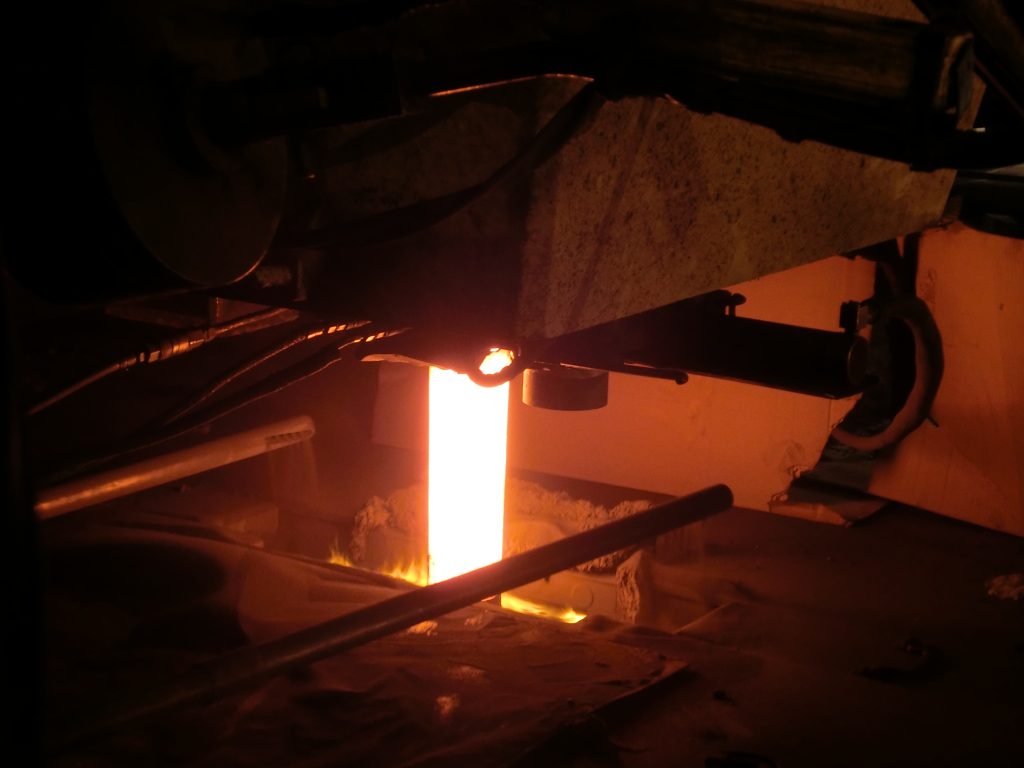 China and India are the top two steel-producing countries in the world, producing 1,032.8 and 118.2 million tons of crude steel per year respectively. While China is presently the largest steel-producing nation, its domestic demand for steel is expected to decline in the coming years. India’s steelmaking industry, on the other hand, is projected to nearly double by 2030 and almost quadruple by 2050, relative to 2019 production levels. This can be attributed to the importance of steel in infrastructure, housing, and other sectors crucial to India’s development. Thus, engaging India in any global steel decarbonization arrangement will be critical. Moreover, India’s involvement may be important to winning China’s engagement in any global effort as well.

Steel production in India is highly emissions-intensive, representing almost a third of country’s direct industrial carbon dioxide emissions. As India looks toward both increases in steel demand and a national target of net-zero emissions by 2070, steel decarbonization will become a crucial pathway for the industry. The issue is whether existing policy and economic tools can facilitate a sectoral transition to green technologies to produce net-zero steel quickly enough to meet the country’s overall goals.

The Indian steel industry has a number of characteristics that will make deep decarbonization particularly challenging. The industry is much more energy- and emissions-intensive than other countries’ steel industries, due to several factors. Steel production in smaller facilities relies heavily on coal-based direct reduction to meet local steel demand, which carries a high carbon dioxide intensity. The wide availability of domestic (non-coking) coal reserves, lack of domestic natural gas supply (especially in western India, where most coal production is located), and scant supplies of high-quality scrap contribute significantly to this reliance on coal and to the barriers to reducing coal use. Many of these smaller blast furnace facilities are relatively old—around twenty-five years since installation, on average—and consume more energy per unit of output as a result. Larger facilities and producers use blast furnace-basic oxygen furnace (BF-BOF) facilities, using iron ore and coking coal for steel production. The larger plants on average are slightly less emissions-intensive than the smaller local direct reduced iron (DRI) facilities, but they are still very coal-intensive.

The differences between small and large facilities manifest in vastly different decarbonization outlooks in the upcoming years. Large steel producers comprise about 63 percent of total production and cater to an international market. As a result, they must be responsive to new initiatives in world markets and developments such as the EU’s Carbon Border Adjustment Mechanism (CBAM), which is expected to impact India’s steel exports significantly. These initiatives incentivize a transition toward green steel, in an effort to keep up with international market trends. About half a dozen large companies have the market and technological sophistication to seek funding for more efficient new plants. But the geographical distance from natural gas, lack of recycled scrap, and need to expand production at a large scale means they will almost exclusively be installing new BF-BOF technology. Smaller facilities cater to the domestic market, which is highly sensitive to price changes. For these producers, decarbonization is less appealing, as it could hurt their bottom line, so they are likely also to continue to use exclusively coal.

An increased push for decarbonization

Pressure within India on the steel industry to advance on decarbonization has also increased in recent years. India co-chairs the Industrial Deep Decarbonization Institute (IDDI), which is a global coalition of organizations working to create demand for low carbon industrial materials, including steel. IDDI also works with national governments to standardize decarbonization methods, such as carbon assessments, and incentivize investment into low-carbon procedures. In alignment with these goals, Prime Minister Narendra Modi recently announced a net-zero emissions goal by 2070. Specifically within the steel industry, the 2017 National Steel Policy aims to facilitate the growth of the industry by tripling production by 2030, increasing per capita consumption, and reducing carbon dioxide emissions intensity. In July 2022, Climate Group and ResponsibleSteel launched SteelZero in India, which is a global initiative focused on facilitating the transition to a net-zero steel industry by creating growing markets for less carbon-intense steel. Several large businesses in India have joined the initiative, which asks major steel-purchasing companies to commit to buying and using 50 percent low-emission steel by 2030. These policies and goals are ramping up pressure on the steel industry to take steps toward decarbonization, and several major steel producers are working on developing greener technologies and encouraging international technology cooperation.

Although such cooperation is promising, India is experiencing a piecemeal approach to decarbonization, in which individual actors and policies are working somewhat independently of one another. To create a net-zero steel industry, sector-wide cooperation is needed, in which goals and standards for the industry are determined. This could be best achieved through an incentive-based approach, particularly with smaller facilities, which will need additional support and prioritization in order to keep up with a changing market.

A few policy tools are already in place or in development to facilitate an incentivization initiative, such as India’s Perform, Achieve, Trade (PAT) scheme. PAT established a cap-and-trade system for energy, intended to help energy-intensive industries become more efficient. The Indian government is also working to establish a national carbon market, voluntary at first, but it is unclear whether such a policy will impact major technology investment choices by large steel producers in the short run.

With virtually all growth in steel production coming from large new BF-BOF facilities using coke and coal, roadmaps for short and medium-term decarbonization focus on a suite of measures and policies which must contribute an important but relatively small contribution to the overall goal. These include technological upgrades in energy efficiency, use of cleaner coal-based fuels, and channeling more scrap steel to the industry (for example, from ship and car dismantling). The possibility of future use of carbon capture utilization and storage (CCUS) is also a potential option, but India does not have ideal geology for underground CO2 storage. The most important prospect for deep decarbonization will be pioneering use of hydrogen as a replacement for coal in the BF-BOF process.

Current strategies for capping and then reducing emissions after 2030 rely heavily on “green” hydrogen technologies, which use hydrogen produced by renewable energy, rather than coal, to reduce iron into a state that can be processed into steel. Implementing this technology at scale would slash emissions, and India is currently investing significantly in efforts to reduce the costs of this process. Pivoting to hydrogen would also reduce India’s reliance on imported coal, providing further economic incentives.

Research into the future of green hydrogen suggests that 100 percent green hydrogen-based steelmaking in India may not be cost-competitive until after 2030 and perhaps much later. However, “gray” hydrogen, which is hydrogen created using natural gas, is more commercially viable. If CCUS can be installed in these plants, the resulting “blue hydrogen” could reduce total emissions. Although gray hydrogen obviously does not have nearly the same climate benefits as green hydrogen, its use as a fuel and a reducing agent is still less carbon-intense than a coal-based process and could act as a bridge until green hydrogen is more cost-effective. Combining “gray” and “green” with some “blue” hydrogen technologies, along with expanding wind and solar resources, is likely the most cost-effective approach to bridging the transition to steel production via green hydrogen. Since blast furnaces built in the next ten years will still be early in their life cycles in 2040, a policy that requires all new Indian BF-BOF plants to be adaptable for later transition to hydrogen could be central to any long-term pathway to decarbonization by 2050 or even 2060. Even if India does not fully participate in an initial global steel decarbonization “arrangement” reached by some other steel-producing countries, the adoption of global green steel standards, a growing market, and border carbon measures favoring lower-emission steel would likely enhance the motivation of the Government of India and major Indian companies to align themselves with these trends.

Indian steel production is currently highly carbon-intensive. While some major producers are interested in decarbonization, the current approach is fragmented and slow-moving. As it moves forward to achieve its carbon neutrality goals, India has an opportunity to create sector-wide change. Differences in the funding streams and target markets among large and small steel producers pose a challenge. Looking towards practical action on decarbonization, using gray hydrogen in the short term can reduce the carbon intensity of the steelmaking industry until green hydrogen becomes commercially viable. But a suite of policies and funding initiatives across sectors will be required. The most important of those is to make sure that new BF-BOF steel plants have the capability for conversion to much cleaner technology, predominantly hydrogen, well before the end of useful life.

For that reason, any new global arrangement to decarbonize steel must be open to and seek to engage the Government of India and the leaders of India’s steel industry. Steel producers that operate in the global market must consider an accelerating international movement that emphasizes “green” steel and creates markets for it. They will need to access financing in global markets that is available only to decarbonizing borrowers. The Government of India must strengthen mandates and incentives to cut energy use and emissions, emphasize a circular economy for steel, support massive investments in new hydrogen facilities to serve the steel industry, and ensure that new plants are adaptable to lower-carbon technologies in the future. Without a multilateral arrangement that the G7 can kickstart, such progress in India is much less likely. Although India is not a member of the G7, its presidency of the G20 in 2023 and that fact that it currently co-chairs the Clean Energy Ministerial (CEM) with the United States—the meetings of both will be held in India in 2023—mean that it can coordinate closely and immediately with the United States and other G7 countries if the G7 were to take the lead in 2023 to initiate a global arrangement on decarbonizing steel.

Matthew Piotrowski is senior director of policy and research at Climate Advisers.

George Frampton is a distinguished senior fellow and director of the Transatlantic Climate Policy Project at the Atlantic Council Global Energy Center.

Nitya Aggarwal is a policy and communications intern at Climate Advisers.

By Matthew Piotrowski and George Frampton

The G7 is an ideal forum in which to develop the basis for cooperation on industrial decarbonization. A successful program needs to be housed in the right venue and engage with the right stakeholders.

Europe and the Caspian: The gas supply conundrum

The Caspian has emerged as a major player in Europe’s effort to move away from Russian gas. But logistical and political difficulties could prevent crucial Caspian projects from getting off the ground.

The G7 should prioritize low-carbon steel at its upcoming summit

Steel decarbonization standards and methodology should be top of mind for the G7. Cooperation and harmonization is the only way to secure optimal climate and business outcomes for this emissions-intensive and trade-exposed sector.