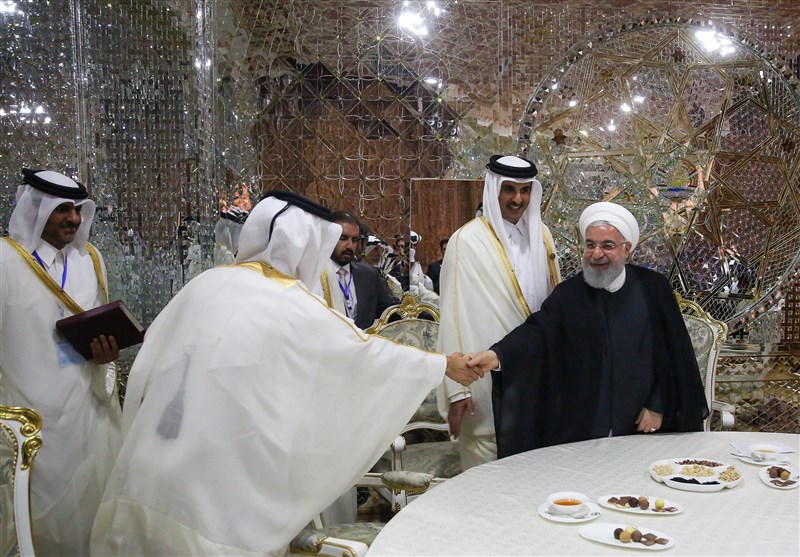 Since President Hassan Rouhani’s election in 2013, Iran has proposed the establishment of a regional dialogue forum at various international conferences, through articles in numerous platforms, and within official statements.

Iran has sought an inclusive regional dialogue forum since the 1990s similar to the Organization for Security and Cooperation in Europe (OSCE).

The OSCE provides a particularly suitable framework for Iran and Gulf Cooperation Council (GCC) countries. An official summit could be organized in Baghdad, Muscat or Kuwait City to improve relations between countries surrounding the Persian Gulf, or in other words, the Hormuz Strait Community. This would be the first such meeting of the eight littoral nations of the Persian Gulf—with the possibility of including Yemen in later stages—to tackle mutual concerns and shared threats.

President Rouhani presented an updated version of Iran’s proposal at the 2019 United Nations General Assembly, which he dubbed the Hormuz Peace Endeavor, or HOPE.

Foreign Minister Mohammad Javad Zarif briefly explained the contents of the proposal during a special session of the UN Security Council. HOPE, according to Zarif, is based on the fact that all regional states have the responsibility to ensure peace, stability and prosperity in the region and, together with the global community, have a common vital interest in maintaining freedom of navigation and energy security for all.

Iran presented HOPE as a plan of action which seeks to initiate preparatory arrangements for an HSC Summit to commence deliberations on a broad spectrum of security and cooperation issues, including energy security, arms control and confidence building measures, military contacts, establishment of a possible Weapons of Mass Destruction Free Zone and the conclusion of an HSC non-aggression pact. Additionally, HOPE seeks to establish a joint taskforce, on various issues regarding practical measures to gradually expand cooperation including in early warning, prevention and resolution of conflicts, combatting drug and human trafficking, joint investments and ventures in energy, transit and transportation, and cooperation in cyber security.

Zarif acknowledged that these objectives can only be promoted through adherence to common principles of good neighborliness such as dialogue and mutual respect, respect for sovereignty, territorial integrity, and invariability of international borders, peaceful settlement of all disputes, rejection of threats and use of force, non-aggression and non-intervention in the internal or external affairs of each other, and rejection and non-participation in coalitions and alliances against each other.

Importantly, Iran seeks the participation and support of the United Nations to furnish the necessary international umbrella and to ensure the legitimate interests of the international community, based on UNSC Resolution 598 which facilitated the ceasefire that ended the war between Iran and Iraq in 1988. Paragraph eight of this resolution requests the UN Secretary General examine, in consultation with Iran and Iraq and other States of the region, measures to enhance the security and stability of the region.

Aside from the security interests of the Islamic Republic, HOPE takes into consideration the concerns of the GCC states. However, Iran makes no secret that its ultimate goal is the withdrawal of US troops from the region. In his UNGA address, Rouhani argued that the formation of any security coalition and initiative under any title in the region with the centrality and command of foreign forces is a clear example of interference in the affairs of the region, adding that the security of the region shall be provided when American troops pull out and that security shall not be supplied with American weapons and intervention. Additionally, Rouhani appealed to the GCC states by stating: America is not your neighbor. This is the Islamic Republic of Iran which neighbors you and we have been long taught that: Neighbor comes first, then comes the house. In the event of an incident, you and we shall remain alone.

So far within the actual contents of the initiative, Iran has not demanded the immediate withdrawal of US forces. Instead it calls for the rejection and non-participation in coalitions and alliances against each other, meaning as long as US forces are not meant to threaten Iran’s security, coexistence might be possible. It would have been delusional for Iran to expect the removal of US troops under the current circumstances in which Saudi Arabia is expecting an even broader US engagement within its territory, Qatar relies heavily on US assurances provided through the Al Udeid Airbase, Bahrain hosts US Naval Forces Central Command (NAVCENT), and Kuwait, Oman and the UAE have their own military ties with the US.

As a standing counter proposal, the United States has called for the establishment of an International Alliance for Safety and Protection of Maritime Navigation, which so far includes Saudi Arabia, Bahrain, the UAE, Australia and the United Kingdom. Additionally, since the Trump Administration withdrew from the Joint Comprehensive Plan of Action (JCPOA) in May 2018, there has been an effort to establish an Arab NATO to counter and contain Iran.

The first ministerial level meeting of the so-called Middle East Strategic Alliance (MESA), took place on the sidelines of UNGA in 2018 where Secretary of State Mike Pompeo met with his counterparts from the six GCC countries, plus Egypt and Jordan. A similar meeting was held this year—minus Egypt, which decided to withdraw—but included Iraq as an observer. It is relatively clear, however, that Oman, Qatar, and likely Kuwait, would be wary to join such an arrangement if it leads to a military confrontation with Iran. This wariness has been previously expressed by their opposition to forming a unified military force within the GCC.

At the same time, it is difficult for any GCC state to support an Iranian proposition on regional security given frictions within the Arab organization. This is despite the fact that Oman, Qatar, Kuwait, and the UAE have been calling for similar propositions with regards to regional dialogue. Saudi Arabia and the UAE have maintained a blockade of Qatar for more than two years. Furthermore, Saudi Arabia and Bahrain still lack diplomatic relations with Iran, after the incidents that occurred in Iran in response to Riyadh’s execution of Shia Sheikh Nimr al-Nimr.

Saudi Arabia is feeling particularly aggrieved following the Aramco attacks on September 14. The United States, Britain, France and Germany have named Iran as the state that bears responsibility despite not providing concrete evidence.

At UNGA, Saudi Foreign Minister Ibrahim al-Assaf called on the international community to apply utmost pressure on Iran, arguing that the best way to control the Islamic Republic was by cutting off its financial resources. In tandem to such posturing, however, there have been reports that Pakistan and Iraq have been involved in mediating possible talks between Saudi Arabia and Iran.

History has shown that it is not possible to advance prosperity, security, and stability in the region in a non-inclusive manner that excludes Iran’s participation. The fate of HOPE is contingent on Iran’s ability to transform the proposal into concrete steps to generate confidence with its Arab neighbors, in addition to garnering the support of the international community, including the United States. Clearly, the majority of GCC states are not prepared to forego their military partnerships with the United States absent a real local capacity to guarantee their security and political interests. While it is unlikely that all GCC states will genuinely embrace the proposal under current circumstances, it is high time for all countries surrounding the Persian Gulf to seek a common path away from current tensions and hostilities.

Mehran Haghirian is a PhD student at Qatar University. He is also a researcher and assistant director at the Ibn Khaldon Center for Humanities and Social Sciences. Follow him on Twitter: @MehranHaghirian.

Luciano Zaccara is a research assistant professor at Qatar University. He is also director of the Spanish Observatory on Politics and Elections in the Muslim and Arab World (OPEMAM). Follow him on Twitter: @LucianoZaccara.

The roots of the current crisis in the Persian Gulf go back more than three decades to a devastating war between Iran and Iraq. So does a potential face-saving way to begin to de-escalate that crisis.

How to build a Gulf coalition to counter-Iranian regime aggression

The aircraft carrier USS Theodore Roosevelt and guided missile cruiser Normandy operate in the Arabian Sea conducting maritime security operations (Reuters) American efforts to build a maritime coalition in the Gulf to counter Iranian regime efforts to impede the free flow of shipping through the Strait of Hormuz have proven difficult and time consuming, but […]

Sanctions supersede overtures between US and Iran at the UN

United Nations General Assembly summits can be an opportunity for ice-breaking encounters between long and bitter adversaries. For the US and Iran this year, however, it was another missed opportunity.