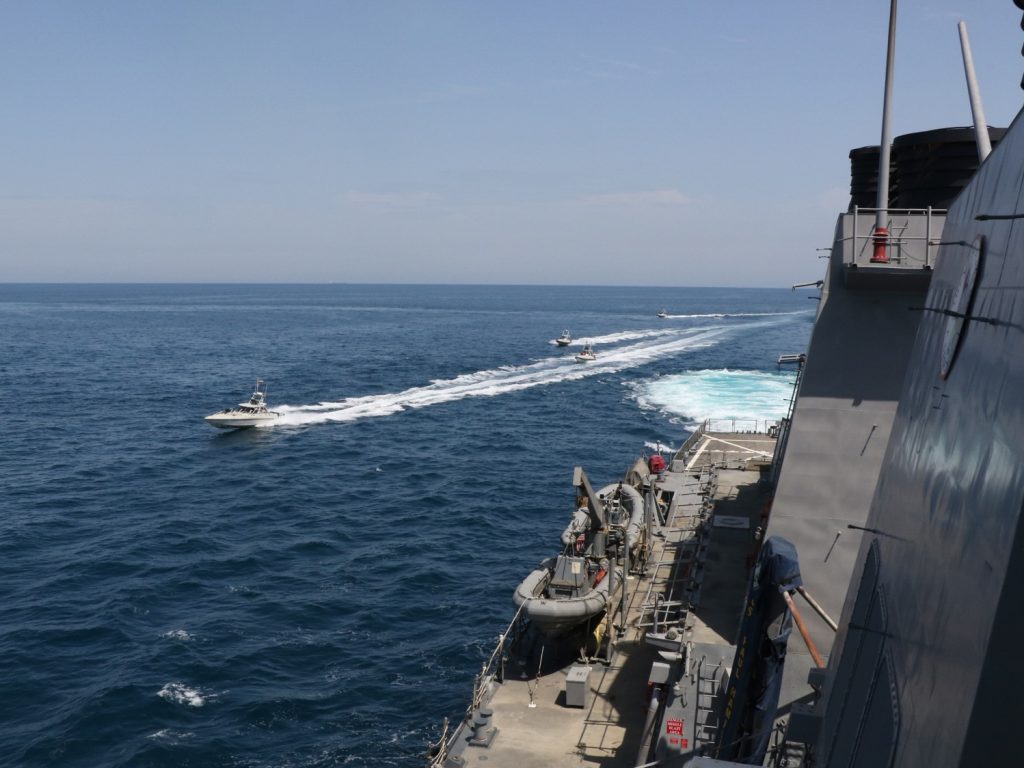 In a tweet on April 22, US President Donald Trump announced that he ordered the US Navy to destroy any Iranian boats harassing US warships. While the tweet may seem like new and escalatory guidance from the Commander in Chief to his forces in the region and an indication of a substantial increase in tensions between the United States and Iran, it is neither.

President Trump’s tweet follows the latest round of Iranian Revolutionary Guard Corps Navy (IRGCN) malign behavior in the Gulf, beginning with the IRGCN seizure of a merchant ship in the Strait of Hormuz. The IRGCN only released the merchant vessel when they learned it was Chinese flagged, demonstrating a disconcerting level of ineptitude in an increasingly tense environment. Just days later, eleven IRGCN vessels repeatedly approached US Navy ships in an “unsafe and unprofessional” manner.

Malign behavior by the IRGCN is nothing new, and US Navy commanders will continue to deal with such provocations in a professional manner. US forces operating in the region are well-trained on their inherent right and obligation of self-defense, as well as routine Iranian efforts to test the limits of their patience. Appropriate protocols are embedded in international law and detailed in the Chairman of the Joint Chiefs of Staff (CJCS) Standing Rules of Engagement.

US forces are proficient in utilizing a full toolbox of measures designed to determine the intent of a vessel approaching in an unsafe and unprofessional manner, including the use of bridge-to-bridge radio, sounding of the internationally recognized danger signal, the use of additional audio and visual signals, and the firing of warning shots. The speed and perceived level of aggression at which a potentially hostile vessel approaches determines the number of measures a commander has available before resorting to lethal force. Overtly provocative behavior increases the level of tension and the opportunity for miscalculation.

On April 19, Commander of the IRGCN, Commodore Ali Reza Tangsiri, publicly addressed the latest incidents of Iranian malign behavior. Tangsiri provides a series of reasons for Iran’s “response” to what he described as recent US aggression and missteps, but he does so without any presentation of evidence. Unfortunately for him and the Iranian regime, the United States has substantial audio/visual footage of this most recent IRGCN provocation.

Iran’s reason for increasing tension in the Gulf, which has ebbed and flowed since the revolution, might be to divert the attention of the Iranian people from the combined effects of the US maximum pressure strategy, COVID-19, and the collapse of the oil markets. The Iranian economy suffered from high unemployment, runaway inflation, and increasing shortages even before the virus hit and oil collapsed. Both events have placed additional stress on an economy already stretched to the limit. Malign behavior in the Gulf has long been a favored card in the regime’s effort to divert attention from the country’s domestic problems.

It is also possible that this most recent series of provocations is the beginning of Iran’s response to the killing of their most respected general, Qods Force commander Qasem Soleimani, in a US airstrike in January and a sign that similar incidents will continue. Iran has a lengthy history of aggressive behavior that comes and goes, aligned with the regime’s desire to increase or decrease tension in the Gulf. However, such behavior has a distinct Iranian thumbprint on it and often can be recorded and shared with the world, as we have recently seen. While additional retribution from the regime over Soleimani’s death is all but certain, it will likely be asymmetric in nature and difficult to pin on the regime.

Fortunately, US Navy commanders are capable of understanding that President Trump’s tweet isn’t direction for them, as they already have adequate guidance, but rather a warning to Iran that the United States will protect its assets in accordance with international law and the CJCS Standing Rules of Engagement. The tweet, rather than being escalatory in nature, may actually decrease tension in the Gulf by warning Iran that they are dangerously close to crossing a US red line, with consequences Tehran would not likely find beneficial, even if they hope a US reaction to their behavior might unite a restless and dispirited population.

The tweet was not a message intended for US Navy commanders; it was intended for Iran and serves as a warning that continued malign behavior could lead to unintended and unfortunate consequences that could quickly spiral out of their control.

The Gulf states should follow Washington’s lead in restoring deterrence in the face of the desperate regime in Tehran.