Fresh off its spring hiatus, Israel’s Knesset resumed work on May 9 and plunged directly into a chaotic summer session that is scheduled to extend through the end of July. The tenuous prospects of Prime Minister Naftali Bennett’s ruling coalition are fanning speculation from critics that its box office run will be cut short.

Expectations of a restful Passover recess for parliamentarians were disappointed when Yamina MK Idit Silman resigned from her position as majority whip on April 6. The high-profile defection of Silman, an erstwhile Bennett ally, to the ranks of the opposition—headed by former Prime Minister Benjamin Netanyahu—moved the Knesset into a sixty-sixty deadlock, sending the government into a harrowing tailspin, with scant margin for error.

Bennett’s chief mistake here was diverting his simultaneous focus from both sides of the split-screen. While he was out burnishing his diplomatic credentials on the global stage—conferring with world leaders at the United Nations Climate Change Conference in Glasgow, paying the first-ever visits of an Israeli premier to the United Arab Emirates (UAE) and Bahrain, and engaging in shuttle diplomacy to resolve the Ukraine crisis—the supporting cast of his Yamina Party was entrusted to absorb the fury of accusations from conservative voters that he and his cohort had betrayed their Jewish-Zionist pedigree by joining hands with Israel’s left-wing. Insufficient attention to the calls of distress from within his own caucus set the scene for Bennett to hemorrhage more of Yamina’s disgruntled delegates. (Amichai Chikli, an earlier renegade, was formally ousted from the faction on April 25. Additionally, Religious Affairs Minister Matan Kahana, Bennett’s consigliere, announced on May 13 that he would be returning for an encore on Yamina’s Knesset roster, motivated ostensibly by an urge to displace and thus neutralize fellow party member Yomtob Kalfon—whose loyalties to Bennett’s agenda were called into question—and to avoid a rerun of the Silman debacle.)

The frame shifted subsequently toward Mansour Abbas and the four Knesset seats of his United Arab List (UAL), whose exodus from the coalition—as a possible sequel to Silman’s departure— would almost certainly have brought down the curtain on the current government. After suspending its involvement in the Bennett ensemble on April 17, the UAL repledged its support for the collaboration on May 11, but tensions with and within the bloc remain high, especially since the shooting death of Al Jazeera correspondent Shireen Abu Akleh during violent clashes between the Israeli Defense Forces (IDF) and Palestinian militants in Jenin. If Abbas decides that his experiment to “help improve the lives of Israeli Arabs on issues like housing and fighting crime” has failed or if, for any reason, the UAL’s religious Shura Council exercises its oversight prerogative and instructs Abbas to quit, the show will be as good as cancelled.

Meanwhile, on May 19, Ghaida Rinawie Zoabi of the progressive Meretz Party gave notice that she was ceasing her affiliation with the fragile coalition. Bennett now headlines what is officially a minority government.

Facing a divided squad of Knesset rivals, the unity coalition has been its own worst enemy from the outset. Flash points such as the Temple Mount—where Israel’s assertion of sovereignty has been met with Arab resistance—and the resurgence of Hamas attacks (and Israel’s countermeasures) will continue to test its structural integrity. A May calendar full of volatile commemorations—including Israel’s Independence Day on May 3-4; Nakba Day on May 15, when Palestinians mourn Israel’s establishment; and Jerusalem Day on May 28-29, when Israel will celebrate the city’s reunification—exacerbates the challenge.

‘Back to the Future’

Moving forward, there are three potential spin-offs to the present storyline. One pitch has Team Bennett recovering its stride and even approving a 2023 budget, which will be brought to ministers for a vote on June 16. Breathing life into this contingency is the fact that various components of the coalition—Yamina and the UAL prominently among them—would risk being exiled to opposition or falling below the electoral threshold if Israelis went to the polls now. In fact, the government, for all its shortcomings, weathered two no-confidence motions on May 9 and managed to pass over two dozen bills in the Knesset—suffering only one defeat—during the ensuing week. But prevailing conditions, especially since the loss of Bennett’s majority, suggest that the sustainability of this momentum is highly questionable.

A second option would call for sixty-one or more lawmakers to nominate another one of their 120 colleagues to replace Bennett as prime minister. The in-house appeal of this approach comes from its inherent sidestep of the ballot box. Instead, a new government would be introduced seamlessly without requiring a preliminary Knesset election that might dispatch some of its existing ranks to the unemployment line. Undermining the viability of this narrative is the unlikelihood of the Knesset rolling out a red carpet for any alternative leader, with precedent demonstrating the inability of its members to coalesce around any other aspiring premier. Even if the opposition were to grow to sixty-one, Netanyahu—its chief and still the most popular politician in Israel—could never garner the critical votes of its Joint Arab List (JAL) for a bid to seize back control.

Under these circumstances, the most probable scenario is a spiraling descent toward elections and, because of the persistent stalemate which stands to prevent the creation of any consensus, a throwback to the ongoing sequence of inconclusive elections that plagued Israel between April 2019 and March 2021. A Likud-sponsored bill to dissolve the Knesset was withdrawn on May 11, after the UAL returned to the fold of the Bennett government, but it will resurface assuredly now that the stars have aligned for its passage.

Against this backdrop, Bennett and Foreign Minister Yair Lapid are struggling to write the script for the government’s next and, perhaps, final act. Rampant skepticism about their capacity to stabilize the coalition continues to feed doubt that this venture can somehow survive until August 27, 2023, when Lapid is slated to rotate into the premiership. This predicament is fueling mutual suspicions that each of the protagonists is scheming to make a power grab.

According to their initial agreement—which was crafted to ensure that Bennett couldn’t precipitate elections independently and, thereby, deny Lapid his follow-on term as head of the franchise—Bennett committed to Lapid’s immediate installation as caretaker prime minister in the event of the government’s demise and until the formation of a successor cabinet. The caveat to that arrangement maintains that Bennett would remain in charge if said collapse were instigated by any one of Lapid’s six constituent parties—Yesh Atid, Blue-White, Labor, Meretz, Yisrael Beiteinu, and the UAL—within the coalition.

This state of affairs has given rise to the conjecture that Bennett and Lapid are operating stealthily to incriminate each other’s lieutenants for a denouement of their partnership. Recent approval for thousands of new settlement units—which incensed left-wing elements—and parallel reports that Lapid was amenable to advancing legislation with the cooperation of the JAL, a bright red flag in the eyes of Israel’s right, have been perceived by some as unsubtle attempts to send ideological objectors fleeing to exit the government.

Although Bennett and Lapid have shared the spotlight comfortably throughout most of their co-production, their respective political careers could depend on which of them wins the spoils of this contest. Whichever of them should occupy the Prime Minister’s Office at the start of Israel’s next election season—assuming that no dark horse candidate emerges to sideline them and avert an imminent dash to the polls—will not only enjoy a bully pulpit from which to campaign, but also find himself ensconced as the leading man for what augurs to be a very long-term caretakership.

The palpable danger of the interim period will come from a preference for politics over the substance of governance, with pandering by election-seekers who hope to ingratiate themselves with the public. Tough talk will dominate the discourse and saber-rattling against Israel’s enemies—who continue to rehearse for battle—will be liable to spiral into violence. The compulsion to provide tangible “deliverables” for the electorate could promote various afflictions from fiscal irresponsibility to military adventurism. Protracted instability will not serve Israelis well.

Making a cameo appearance in this drama will be US President Joe Biden, who has tentative plans to visit Israel in June. The president’s itinerary—which, according to media reports, could include a tour of a Palestinian hospital in East Jerusalem and a summit meeting with principals from Israel, India, and the UAE—will be scoured by Israelis for any partisan nuances and will factor directly into their assessments of Bennett’s performance. Whether he, or some other contender for his office, then collects the golden trophy will be known only once ballot envelopes are opened. 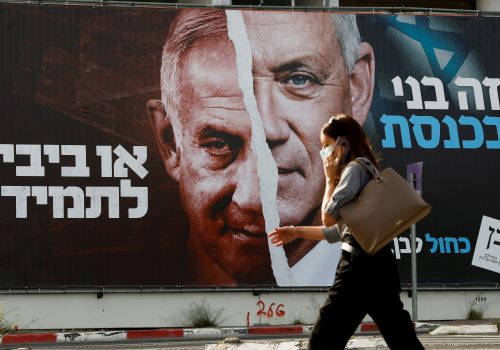 Down the rabbit hole of Israel’s electoral wonderland

Nothing is certain at this point other than the fact that Israel's leadership is up for grabs. It will be ugly and could conceivably end in a stalemate. 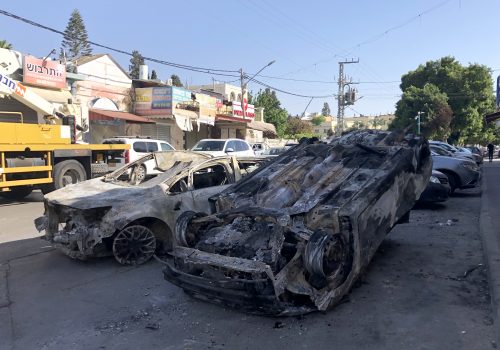 The escalation between Israel and Hamas: What’s new—and what’s not

While the intensity of the fighting appears to have caught some veteran practitioners of Middle East conflict and diplomacy by surprise, a trail of discernable factors led to this fraught outcome. 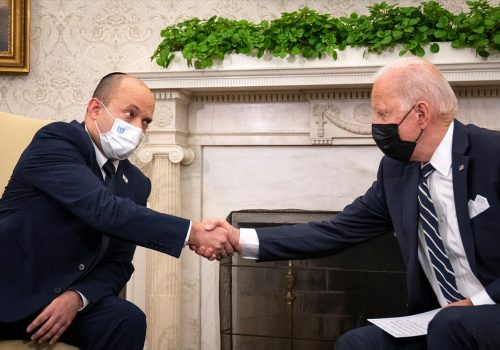 Biden and Bennett turned the page on US-Israel ties. But not many were paying attention.

Israeli Prime Minister Naftali Bennett’s first visit to the White House on August 27 occurred just as President Joe Biden was absorbing the horror of the Kabul airport suicide bombing, lending poignancy to their efforts at resetting relations between the United States and its closest Middle East ally.

Image: Israel's Prime Minister Naftali Bennett confers with an aide as he chairs the weekly cabinet meeting in Jerusalem, May 8, 2022. Maya Alleruzzo/Pool via REUTERS